Oak Cliff 2018 Review: I AM NOT A WITCH, A Superb Film From A Prodigious New Talent 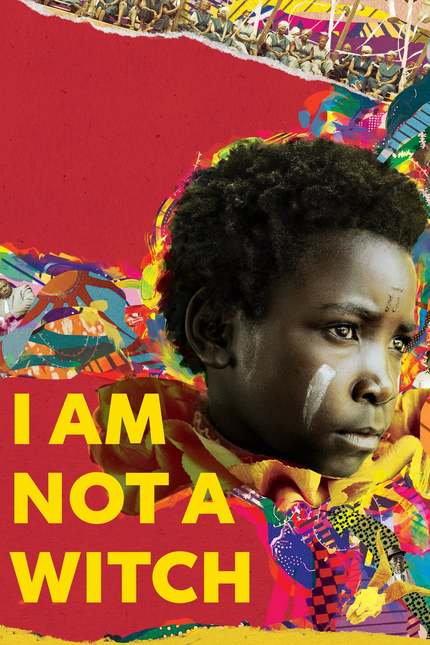 A young girl, unremarkable in any way, is walking down a path in rural Zambia. Suddenly, a woman walking ahead of her carrying a large bucket or water falls to the ground, losing her load. As the fallen woman looks up from the ground to see this eight-year-old child regarding her without a hint of emotion, suddenly the girl's fate changes forever. She's brought before the local constabulary and accused of being a witch who caused the woman's fall.

Suddenly all sorts of other unfortunates in the village gather in the police station to corroborate her story and pile on with their own tales of woe that can only be explained by supernatural means. One man explains that his whole family was eaten by witches, another vividly recounts a tale in which the young girl, wielding an ax, cut off his arms - both of which are clearly still attached to his body - in a dream. The girl is given an opportunity to dispute these claims, but refuses to dignify the madness with a response, leaving her as good as guilty.

The local government head is brought in to witness and sentence this unusually young witch and he gives her a choice, she can either remain tethered to a long white ribbon for the rest of her days, or she can cut the ribbon and transmogrify into a goat, and potentially the next day's dinner. As is her modus operandi at this point, the girl Shula, chooses the path of least resistance and joins the local witch camp with a dozen or so elderly witches, all bound by the same white ribbons.

Soon the novelty of an eight-year-old witch is too big of a media draw for the local government minister to ignore and he begins dragging Shula around like the latest freak show attraction. She appears on television, prays for rain, and finds herself under his personal care for better or for worse, tethered, as always, to the white ribbon there is given to witches to prevent them from flying away.

I am Not a Witch is an incredibly powerful first feature from Zambia-born director Rungano Nyoni. The story tackles not only the ridiculous nature of superstition in rural Africa, but more directly, and effectively, the devaluation and dehumanization of women on the continent and around the world. The film is filled with a kind of magical realism that is subtle enough as to leave the viewer conflicted about whether or not the events are really magical or simply coincidence, not unlike the unfortunate accident that put Shula on her path in the first place.

Women are shown in the film as nothing more than devices by which powerful men, and sometimes other women possessed of power, exercise their own desires. The ribbon by which Shula is bound to prevent her and the others from flight is a bit of a broad metaphor, but an effective one nonetheless. At one point Shula is brought home by her keeper and meets his wife, another witch who informs her that she has attained respectability the only way she could, through marriage, though we soon see that's not the case at all. Shula remains unmoved once she sees how the world treats her, as a young woman who hasn't harmed anyone, and refuses to apologize for calamities she didn't cause.

It's a difficult film to describe in words, but as a cinematic experience, it's stupendous. The cinematography from David Gallego (Embrace of the Serpent) is outstanding, and captures not only the beautiful landscape of the villages and fields in which the witches are forced to work, but also communicates the emotional depth that Shula's silence embodies. The sound mix similarly envelopes the audience in a way that a film with such little embellishment rarely does.

Rungano Nyoni is a name that I will be watching, and I am Not a Witch is a film that you should be watching.

I Am Not a Witch

Do you feel this content is inappropriate or infringes upon your rights? Click here to report it, or see our DMCA policy.
Rungano NyoniBenfors 'Wee DoBoyd BandaKalundu BandaBoniventureDrama

More about I Am Not A Witch