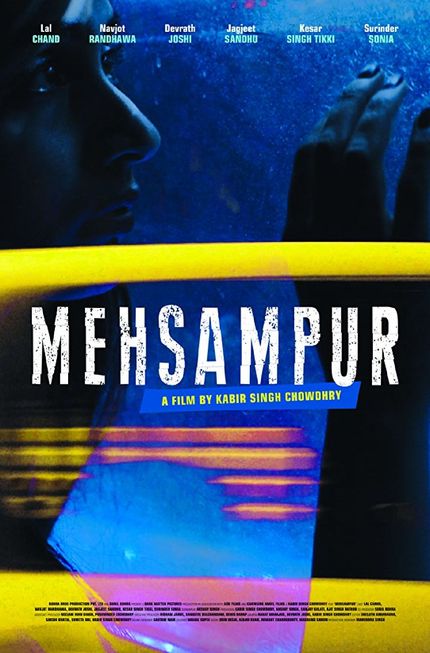 On March 8th, 1988, Punjabi folk music icon Amar Singh Chamkila and his partner Amarjot Kaur were shot and killed as they pulled into the Punjabi town of Mehsampur. The crime remains unsolved, and the killers were never caught. In the film Mehsampur, director Kabir Singh Chowdhry attempts to put together the puzzle of their deaths through a kaleidoscopic hybrid narrative-doc structure that will likely leave more questions than answers.

Chamkila was a controversial figure in Punjabi music, his raunchy songs managed to offend many of the stodgier conservative religious folks in the region, but his star soared nonetheless. His music took him around the world were he found enthusiastic audiences of Punjabi expats hungry for his and Amarjot's unique blend of folk and dark humor, but his appeal was not universal, and a lot of people think it may have led to his death.

Mehsampur is by no means a traditional documentary or true crime story, the premise of the film is even sketchy as we begin with a filmmaker named Devrath (Devrath Joshi) who seems to be attempting to piece it all together, but soon goes way off the rails. Devrath manages to track down some of the principals in Chamkila's life, though it doesn't always go according to plan.

For every scrap of detail we are able to unearth along with Devrath, writer Akshay Singh throws us a maddening curve-ball that makes the viewer wonder what exactly we are doing here. Devrath is a bit of a scoundrel, the kind of guy who'll do anything to get his footage without regard to those from whom he needs assistance. As a result he uses and manipulates anyone he sees as a potential help to himself in a way that doesn't exactly ingratiate him to the audience.

However, it's like a fascinating kind of train wreck from which you just can't look away. Devrath's mental state seems to deteriorate as he comes in contact with a wannabe actress named Manpreet who he drags along in order to film a recreation (?) or some such nonsense, and ends up violating her in much the same way he's violating the truth of this situation by forcing all of the other incidental characters to tell the story he wants to tell, whether it is the truth or not.

Those looking for an answer to the question of who killed Chamkila may walk away from Mehsampur disappointed, but those interested in why people still care about this crime will likely come away with more. In fact, Mehsampur is among the most chilling avant-garde attempts I've seen out of India over the last decade, right up there with the work of Q who set the festival circuit on fire with his 2010 breakout hit Gandu. Mehsampur is no doubt even more obtuse than its predecessors, but it's the kind of challenge that many moviegoers will appreciate.

The fact that a film like Mehsampur even exists and is playing in public is more than a little amazing. Chowdhry is a new and exciting talent, and Mehsampur is confounding and confusing, bold and vigorous, a film for film goers to puzzle over, and in this case, that's a good thing.