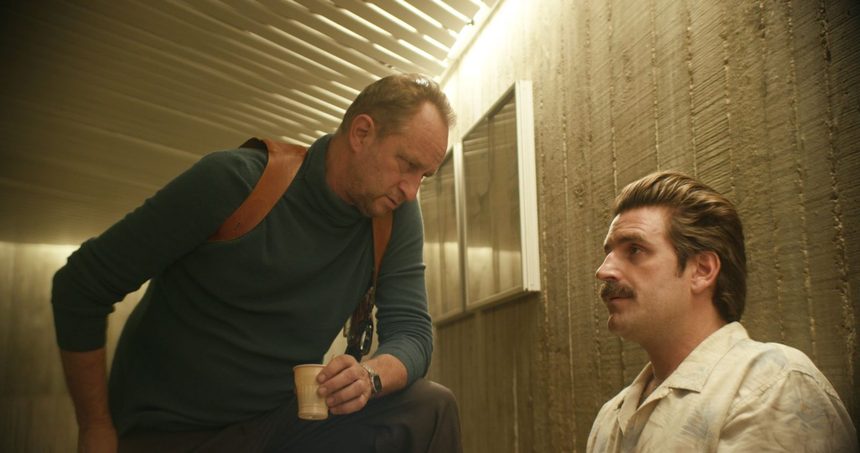 The French absurdist and cult filmmaker Quentin Dupieux (a.k.a. Mr. Oizo) returns to a home turf after "the American period". Dupieux moved from a midnight-movie type of filmmaker, as in the killer tire story and no-reason axiom in Rubber, which was unveiled at Cannes, through the surreal and trippy Wrong, the Marilyn Manson-starring punk comedy Wrong Cops, to full-fledged head-scratching meta-comedy filmmaker with ("Kubrick, my ass") Reality.

Au Poste!, the sixth film since his memorable and symbolic film-career starter Nonfilm, the new offering from Dupieux takes place on a police station during one night. While the producer and distributor remain laconic in revealing more -- official synopsis: "A police station. Face-to-face, a police custody between a police officer and his suspect" -- attempting to reconstruct plots of Dupieux's films proved to rob the charm of the viewing pleasure.

Apparently, the central pair of a police officer (Benoît Poelvoorde, the asshole of God in Brand New Testament) and the murder suspect (Grégoire Ludig) spend an eventful night at a particularly vintage police station. The head-scratching and absurd comedy hijinks remain sure fire. Au Poste! will have its world premiere at the upcoming Le Rochelle International Film Festival (June 29 - July 8), hitting French theatres on July 4.

That's not all, since Dupieux has his next feature-length film, Le Daim, already in the post-production. Jean Dujardin (The Artist, The Wolf of Wall Street) stars as Georges, a man obsessed with a 100% suede jacke,t which purchase will cost him all his savings. According to the synopsis "The possessive and jealous relationship [with the jacket] will push him into criminal delirium". Dujardin himself reportedly called the story a black comedy and "a modern reflection on the myth of Narcissus". The release is expected at some point this year.

Check out the appropriately meta-trailer for Au Poste!

Do you feel this content is inappropriate or infringes upon your rights? Click here to report it, or see our DMCA policy.
Benoît PoelvoordeFranceGrégoire LudigQuentin Dupieux