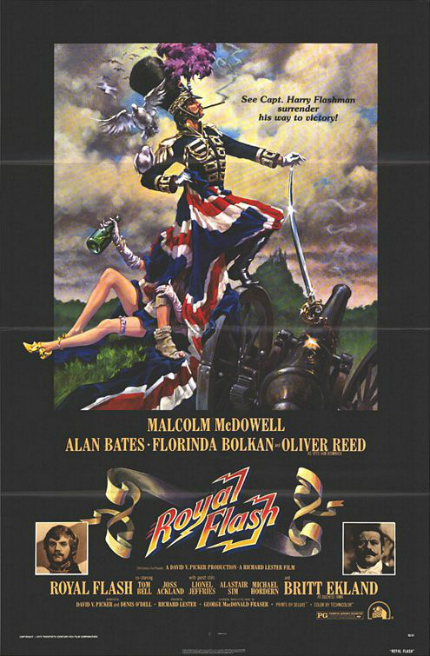 Recently I watched Richard Lester's Royal Flash (1975), starring Malcolm McDowell, for the first time. Adapted by author George MacDonald Fraser from his own novel, it's a broad and sprightly comic adventure that I thoroughly enjoyed.

To be frank, I only purchased Twilight Time's Blu-ray, available since 2013, because it was on sale. I had no memory of the film's U.S. theatrical release in the fall of 1975 and didn't recall any raves about it, either. Also, I've never read any of the acclaimed books by Fraser, a popular series that placed the disreputable Harry Flashman in the center of meticulously researched historical adventures.

But I saw and thoroughly enjoyed The Three Musketeers and The Four Musketeers, first during their theatrical releases and then again on DVD a few years ago, so I was curious about Richard Lester's next foray into period filmmaking.

Royal Flash did not disappoint. The story begins in 1842, as Captain Harry Flashman (McDowell) has returned from war in Afghanistan to great acclaim, which is quickly shown to be entirely false. In truth, Flashman is a craven materialist who stumbles into fame by chance. He enjoys drinking and gambling and bedding down with any woman who'll have him.

One night as he is doing all those things, a police raid -- led by Bob Hoskins! -- forces him out into the night and he meets real-life entertainer and courtesan Lola Montez (Florinda Bolkan) by chance. At the same moment, he has a testy encounter with the real-life Prussian statesman Otto von Bismarck (Oliver Reed). Flashman enjoys a brief, lusty affair with Lola that comes to a sudden halt, and soon thereafter Lola disappears.

Four years later, Harry is lured to Europe to reunite with Lola, who has become entwined in Bavarian politics. The lure turns into a trap, however, when Harry finds himself "saved" by Rudi Von Sternberg (Alan Bates), who, sadly for Harry, is actually an agent for von Bismarck. Harry is forced to impersonate a Prussian prince who has not been cooperating with von Bismarck's plans, and finds himself married to Duchess Irma (Britt Ekland).

It's a wild and loose adventure, capricious in nature, and filled with tasty episodes, so why was it not received warmly upon release in 1975?

Roger Ebert, for example, wrote in part: "It's so similar in tone and spirit to the musketeers movies that we almost seem trapped in the interminable film. ... it's hard to laugh during whole stretches of the film because what's happening is so violent and spiteful. [Lester] never finds the right tone. ... All the elements are in place, but nothing seems to work and nobody seems much concerned."

Vincent Canby was more favorable, but noted: "If the seams between the gags are beginning to show in Royal Flash, and if the pace seems occasionally a little less than breathless, it may be due as much to our expectations of--and our familiarity with--the Lester method as to any lack of invention on the part of the film makers." 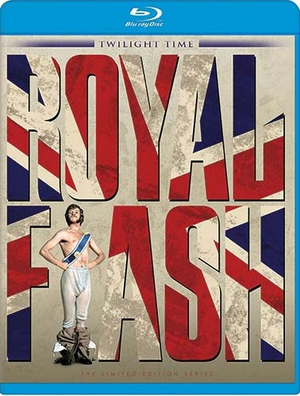 Lester rose to fame with the roughhouse comic antics of A Hard Day's Night and Help!, and also won plaudits for The Knack... and How to Get It, How I Won the War and Petulia. But by 1975, I can see why expectations may have been high.

The primary difference between the Musketeers films, also written by Fraser, and Royal Flash, it seems to me in hindsight, is that Harry Flashman is such a dubious character, yet he's played with such bumbling good humor by McDowell that he's also very likable. There's no true villainy in his soul; it's more like relentless self-interest is his driving force. Even author Fraser allows in an interview included on the disc that Flashman is a more benevolent character on the big screen than in his novel(s).

Even so, that's a major difference from the good-hearted, heroic Musketeers, who put the interests of others ahead of their own. In the early 70s, it was fine for gangsters and con men and drifters to play leading roles in movies, but they had to have a code of honor that, at minimum, protected members of their own family (or gang). Flashman, though, has no such code of honor. His actions are always in behalf of himself and his own best interests.

Perhaps that has scraped people the wrong way back in the day and over the years, or perhaps it's just a feeling that Royal Flash does not represent Richard Lester at his finest. In any event, as a first-time viewer, the movie is a pleasure to watch. On Twilight Time's limited-edition Blu-ray, Geoffrey Unsworth's photography is on gorgeous display, and Terence Marsh's production design is wonderful to behold.

The Blu-ray also carries over two interesting featurettes from an MGM DVD edition released in 2007, as well as an isolated score track, the odd original theatrical trailer, and an absorbing audio commentary by Malcolm McDowell and film historian Nick Redman that is well worth a listen. New liner notes by Julie Kirgo were a nice addition.

Watching this movie has reminded me that I really need to give Richard Lester's filmography another shot; it's been perhaps 20 or 25 years since I tried his 60s films, which didn't appeal to me at the time. And I'd like to catch up with his films after Royal Flash -- Robin and Marian and The Ritz, especially.

As it is, Royal Flash is a very pleasing encounter with an era of comic British historical filmmaking that is long gone.

More information on the disc at Twilight Time's site.

Do you feel this content is inappropriate or infringes upon your rights? Click here to report it, or see our DMCA policy.
Alan BatesGeorge MacDonald FraserMalcolm McDowellOliver ReedRichard Lester