Review: THE MISANDRISTS (2017), a shocking and entertaining tale of gender essentialism 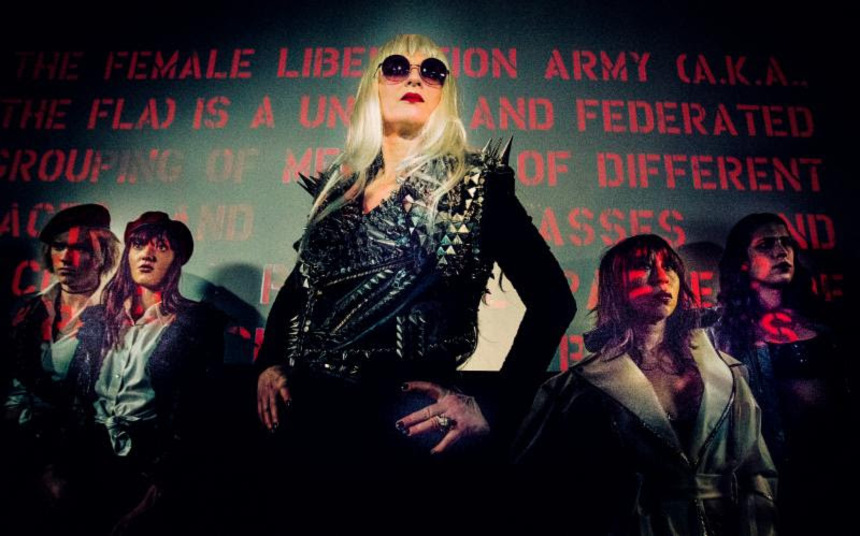 This is the first time I’ve watched a movie by Bruce LaBruce, but I suspect it won’t be the last. In any case, there’s a whole filmography I haven’t had the pleasure of experiencing, so there’s plenty for me to seek and watch. But for those who don’t know who LaBruce is, be warned: his films are not for the faint of heart. Part indie filmmaker, part social protester and part pornographer —at least from his own accounts—, LaBruce’s filmography consists of a varied array of explicit, cheesy and frequently hilarious motion pictures, with titles such as “No Skin off my Ass”, “L.A. Zombie”, or “Gerentophilia”.

His latest, “The Misandrists”, is a tale of extremism and sex, both a critique and an homage to gender essentialism, which manages to show what could happen in a lesbian separatist commune, where each of its members hates men with a passion, and where love between women is considered the norm, without taking into account jealousy or egos. Despite its B-movie quality performances and cheesy dialogue, “The Misandrists” is a memorable tale, both hilarious and dramatic, capable of taking itself seriously while making use of shocking sexual and religious imagery. Once again— not for the faint of heart.

“The Misandrists” is set in 1999, “Somewhere in Ger(wo)many” (you should expect more puns like this, by the way). Out protagonist is Isolde (Kita Updike) who, along with her friend/lover Hilde (Olivia Kunisch) discovers a wounded revolutionary called Volker (Til Schindler) near the woods. Despite the fact that men are not allowed inside the base of the Female Liberation Army (FLA), they hide him inside the basement, hoping that no one, especially their leader, Big Mother (Susanne Sachsee) will notice his presence. Casting choices are questionable from an acting talent standpoint, but not from a visual one. No, none of these girls —and boy— are particularly believable in their respective roles. Dialogue is cheesy, line delivery is stilted, and they don’t even seem to share much chemistry between them during the sexier scenes. But that’s kind of the point; LaBruce seems to favour a B-movie atmosphere above anything else, understanding that, for a story like this to work, it can’t be acted in a traditionally credible way.

Visually, though, each character is more striking that the next. From girls full of face piercings to the outrageous Big Mother and the beautiful Isolde, it is obvious LaBruce knows what he wants to convey with all these varied and colourful faces. The world of the FLA is not only liberal and passionate, but also inclusive and free. This can also be appreciated in the girls’ wardrobe; every fetish is represented, from the schoolgirl outfits with short skirts to the aforementioned nun. Most importantly, though, no character is treated like the protagonist of a porno or as something to be objectified; despite the film’s overall aesthetic, one gets the feeling these outfits are part of the characters and of this world, not a gratuitous visual element. It all feels surprisingly natural and matter-of-factly.

Despite the amateurish performances, “The Misandrists” looks quite outstanding. There are a number of visually striking images, from the shots outside the woods with Isolde and Hilde playing with each other, to some silhouetted shots and an obligatory pillow fight —it is less gratuitous than it sounds— shot in slow motion. LaBruce just knows how to use color; lighting in some scenes is quite captivating —consider a couple of moments shot exclusive with red colour filters—, and costumes make a great use of different tones and textures to give the film a saturated, strong look.

Thematically, “The Misandrists” does seem to embrace feminist ideals, although it isn’t afraid to criticise extremist points of view. Yes, some men are pigs —although according to Big Mother, we should leave actual pigs out of it— and many aspects of society would possibly improve in a matriarchy, transforming it into some sort of utopia —similar to the house of the FLA—, but the revolutionary man’s presence in the house (of course Isolde gets discovered) does create a ripple in these women’s lives. Isolde helps him because she considers him “a fellow dissident”; just because he’s a man, doesn’t mean she should leave him to die in the woods. And as the film progresses, it becomes apparent she’s not the only one to think like that.

“The Misandrists” is quite the miracle, a combination of satire, social commentary, light comedy, bad dialogue and obvious stock footage that, somehow, ends up working. The B-movie aesthetic, combined with some stunning cinematography, works in favour of the story, and despite some shocking elements that might alienate a couple of viewers —although if you don’t want to be shocked, I don’t know why you would decide to watch this picture—, it manages to convey both deep emotion and some interesting critiques regarding modern gender politics. I might never join a radical lesbian cult —I have the feeling they might not accept me—, but “The Misandrists” certainly made the prospect seem a little more inciting.

Do you feel this content is inappropriate or infringes upon your rights? Click here to report it, or see our DMCA policy.
analysisBruce LaBrucecritiquedramagendergender essentialismparodyreviewsatireSebastian ZavalaThe Misandrists