Review: Something Lurks in the Waters Off ISLAND ZERO 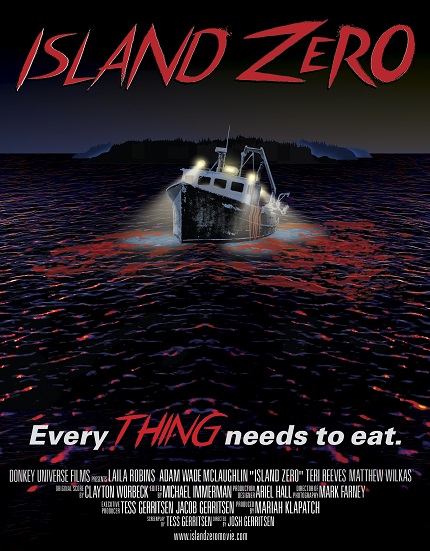 Director Josh Gerritsen’s Island Zero wears its influences proudly on its sleeves, and they become readily apparent as soon as you read the synopsis.

The story of an isolated fishing community being attacked by Something Horrible that comes out of the water immediately reminds one of The Fog (Carpenter’s original, not the shitty remake); the synth score, the poster, and even the title card reinforce the 80s movie vibe it’s going for. And if you’re going to be inspired by someone, who better than John Carpenter?

As we first meet the main characters in this small island off the coast of Maine – a Hooper-like marine biologist (Adam Wade McLaughlin), a mysterious, douchey author (Matthew Wilkas), and the pragmatic no-nonsense doctor with a past (Laila Robins, who quickly emerges as the de-facto lead), among others – Gerritsen and his screenwriter mother, Tess, do a great job of establishing atmosphere and a sense of place, perfectly capturing the ins and outs of a small community where everyone knows each other and people live in a sort of bubble, isolated from the mainland and having to go out to sea for long stretches at a time. Having a largely unknown cast really helps in making this place feel lived-in.

When people start disappearing and the main cast find themselves stranded on the island with no means of escape, this becomes an effective little drama about isolation and survival, with characters coping with their circumstances while trying not to give in to paranoia and fear. It’s so effective, in fact, that once the movie switches to monster mode, with a new species of maritime predator violently claiming victims, you’d be just as happy with it being a survival drama.

The monsters are invisible and can only be seen through thermal cameras; while the horror setpieces deliver on some pretty nifty gore effects, they are hampered somewhat by the obviously limited budget, which dulls their impact. This film is more low-key and atmospheric; there was no need to try and make it bigger. But since Gerritsen took his time to introduce you to the town and its residents before unleashing the creatures, this can be overlooked. Undeniably, it’s Robins who makes the bigger impact as the kind of gun-toting heroine you would definitely want in your corner.

Shot using a local cast and crew, Island Zero works precisely because it understands its limitations; Josh and Tess Gerritsen have focused on building their atmosphere of dread rather than on bombastic, balls-out horror and spectacle, and this makes all the difference. While it has the vibe of an 80s Carpenter flick, it also manages to define its own personality, which makes it stand out from other mid-to-low budget fright flicks.

Island Zero is available on VOD nationwide on 15 May.

Do you feel this content is inappropriate or infringes upon your rights? Click here to report it, or see our DMCA policy.
Donkey Universe FilmsIsland ZeroJosh GerritsenTess Gerritsen