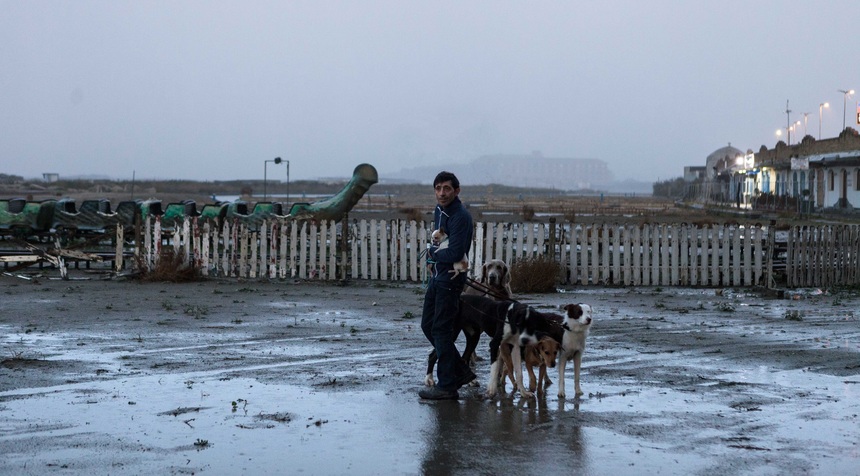 Italian filmmaker Matteo Garrone, whose international breakthrough Gomorra brought him on the world map of cinema, has become a fixture at the biggest festival events.

His latest oeuvre, Dogman, got the celebratory introduction on the French Riviera. Garrone's star-studded, grisly adaptation of 17th century fables, Tale of Tales, might have been perceived as a digression from his line of observing Italian life, such as Gomorra and Reality, however, Dogman marks the return into this thematic flow.

His last feature-length effort can be easily described as a light crossover between Gomorra and Reality. He returns to the outskirts of a city with flourishing crime and stars a protagonist with an unhealthy masochistic obsession, such as the one in Reality. The eponymous Dogman refers to Marcello, a harmless short man with droopy eyelids whose love for dogs transferred into a humble dog grooming business. (Dogman is the name of his dog salon.) He mostly divides his time among furry canines and scuba-diving trips with his daughter, who still looks up to him as a father figure even after the divorce.

To be able to afford the trips his daughter loves so much, he moonlights as a petty coke dealer. And coke attracts a variety of colorful personalities. In Marcello's case, it is his best buddy and nemesis incarnated in Simone, a former boxer with coke and rage control problem. The explosive combination takes a toll on all small business-owners in the neighborhood, with whom Marcello maintains a good relationship, as they also play football together in their free time. "Everybody likes me here," he exclaims at one moment.

The central plotline follows the stormy relationship between Marcello, the do-gooder most likely suffering from a Messiah complex, and the raging bull Simone, whose escapades make everybody's life so miserable, a group of friends even contemplates crowdfunding a hit on him.

Marcello's slouching and small posture become the definition of submissiveness, while Simone's no holds barred aggression denotes selfish and abusive brutalism. The dysfunctional relationship must eventually come to a breaking point and it does, although not until after an exhausting journey. However, Marcello's surprisingly irrational tolerance to towering oppression lacks rational explication.

The script, written by Garrone and Ugo Chiti and Massimo Gaudioso (both also worked on Garrone's previous projects), does not offer any background and leaves the toxic dynamic to be interpreted by viewers, based on the escalation of bullying Marcello can withstand.

Garrone, Chiti and Gaudioso avoid the formulaic, sentiment-bashing pity for the weakest link being unreasonably exploited, as well as a cathartic revenge fulfillment. They do the opposite in both cases, which benefits the storytelling and bemuses viewers. Dogman does not march the path of psychological drama, yet psychological drama remains the closest pigeonhole to shoehorn the film into. At first glance, at least.

Garrone has stated that Dogman, as well as his preceding efforts, started with "a visual suggestion, an image a reversal of perspective; that of some dogs, closed in cages, who witness as witnesses to the explosion of human bestiality..." and even if the statement does not fully illuminate the director's ambition with the story, it reveals enough about the intention of its execution. Aesthetically, Dogman gravitates toward Tale of Tales, as Nicolai Bruel, the film's DoP, lenses many scenes, most notably wide exterior shots of the decrepit neighbourhood, so that the imagery takes precedence over substance.

In lucky constellations, cinematography molds the ambivalence (and visual puns) of certain scenes, for instance in a David and Goliath moment when the composition evokes a somber triumph,  completely stripped of the grandiosity of the accomplishment and being more of a burden.

For social drama, the film feels visually over-stimulative; for psychological drama, Dogman lacks the depth that would offer clues for blank spaces. Such a combination opens the space for interpretation wider than some viewers might prefer, however, the social-political parable remains a sure fit throughout the entire duration. The steep rise of fascist sympathies in Europe, populistic takeover in Italy, Berlusconi's return, and post-crisis austerity measures add up to the queue of possible ideas whirling in the film.

Garrone could be said to be making a full circle here, returning to the topic of tumorous mobsterism in a freelance form outside the boundaries of an organized crime venture. The story is based on the true events of an incident in 1988, though the director himself declared he wanted to move beyond that news story.