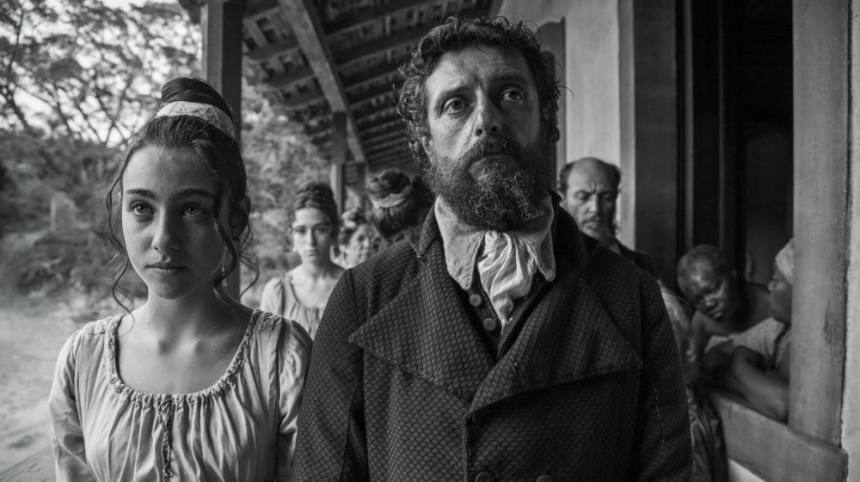 From its very first moments, Vazante makes its intentions apparent.

Captured in black and white imagery that is preoccupied with draining any possibility of color from its quiet, slow-moving landscape, the film is set in and around a remote cattle ranch in Brazil. The year is 1821 and the overall tone is firmly established by a stern and taciturn man named Antonio (Adriano Carvalho), the owner of the ranch and solemn ruler of all he surveys.

With newly-acquired African slaves in tow and his men properly cowed, Antonio is returning from a long trip away, anticipating that his wife will have given birth to their son by the time he returns. We, the audience, already know that tragedy awaits him, since we've witnessed the death of both wife and son in the opening moments.

Antonio is laid low by the news, to say the least. Quickly sinking into a deep mental depression, he can barely rouse himself to eat, much less care at all that his angry new slaves are bitterly rebelling against their new circumstances. His mother-in-law has long deteriorated mentally, so he is left alone, trapped in his own personal quagmire.

Except for his wife's family. They have arrived for the funeral and then stayed on, hoping perhaps for scraps from the master's table. Their company, brief and fragmented as it is, reminds the master (Antonio) of his responsibilities as a land and slave owner, and he returns to his single-minded devotion to his property. 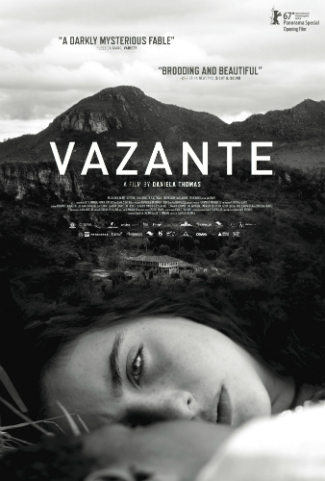 It turns out that the region was once rich in diamonds, for which all the previous workers and slaves were devoted, willing or not. But the area has now been mined-out, so it's a struggle to start planting something else that will grow and bloom into saleable crops. The language differences among the workers and slaves leads to further troubles. To satisfy his sexual needs, Antonio picks one of the longtime slaves, a woman named Feliciana (Jai Baptista), who, of course, must comply immediately, much to the disgust of her teenage son.

And then someone in his wife's family catches his eye. It's not the older daughter, but the younger one, Beatriz (Luana Nastas), who brings the glimmer of a smile to his face. So he makes a marital arrangement with her father, who agrees, and then informs him that the girl has not even started menstruating yet.

No matter. Antonio wants an heir, and expects Beatriz to provide him with one, eventually. But Beatrix has also caught the eye of Feliciana's son, and more trouble is soon to follow.

Daniela Thomas makes her solo directorial with Vazante; she's long been associated with director Walter Salles. Under her direction, the film moves steadily forward toward its natural conclusion. Though the style is stiff and brutal, the characters are (nearly entirely) soft-spoken in their everlasting despair. The inevitability makes it feels like the most hopeless of film noirs, but without any crackling action or witty dialogue to soften the impact.

Instead, Vazante etches itself assuredly into the brain as the memory of a very tragic era when everyone's fate was well beyond the possibility of change by any individual. There are many echoes to today, and I'm near-positive that there are many repercussions and comparisons to modern-day Brazil that I am missing as a North American who remains rather ignorant about the history of the country.

Yet, the film is not a "feel-bad" experience, either. It's more like, "I'm glad I saw that. I'm glad I didn't live then, knowing what I know now."

Vazante has just been released on Blu-ray and DVD by Music Box Films. The imagery looks very good; extras include a Masterclass with director Thomas, a behind-the-scenes featurette with the cast and crew, and a collector's booklet, including an interview with Salles.

If you have a taste for the bleak and the beautiful, I highly recommend Vazante.

Do you feel this content is inappropriate or infringes upon your rights? Click here to report it, or see our DMCA policy.
Adriano CarvalhoBrazilDaniela ThomasLuana Nastas