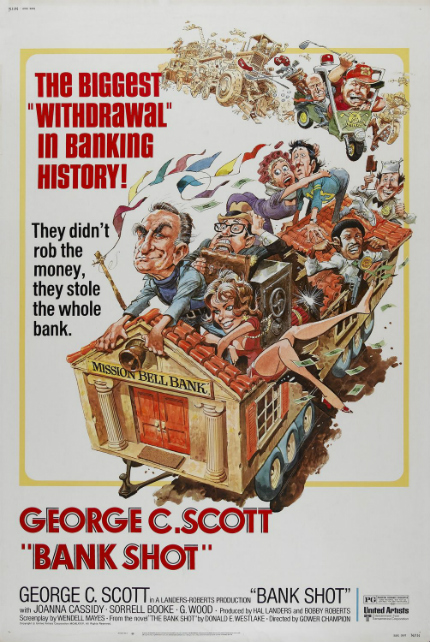 The very idea of George C. Scott starring in a broad comedy caper during his glory years in the early 1970s is startling.

Scott himself recalled in 1982: "People still think of me as a heavy actor, but I grew up professionally doing comedy. I think I did 125 plays before I ever came to New York and most of them were comedy." Probably the earliest Scott performance that left an impression on me was his brilliant turn in Stanley Kubrick's Dr. Strangelove (1964).

He was also very good in Arthur Hiller's The Hospital (1971, and recently considered by yours truly here). Those are very dark comedies, admittedly, and play to his strengths as a dramatic actor. I have yet to see Scott's lead performance in Stanley Kramer's Oklahoma Crude (1973), described as a comedy-drama, so perhaps that's another indication of the actor's continuing desire to play a wide range of roles, beyond the precisely cutting performances for which he became known.

Maybe that's why Bank Shot threw me off almost instantly. Released on July 31, 1974, and directed by Gower Champion, better known for his work as a dancer and choreographer on stage and screen, it's much more broadly played than I had anticipated, constantly winking at the audience in order to remind everyone that it's a comedy.

Beyond the presence of Scott, my expectations were also set by re-reading The Hot Rock, a novel by Donald E. Westlake that introduced the thief John Dortmunder. Westlake later explained that the book had bloomed from a period of writer's block he was experiencing in regard to his famed character Parker, a hard-boiled thief whose exploits were transformed into numerous films, starting with Point Blank in 1967. Westlake wrote those books under the name Richard Stark and they are terse, flavorful, and cold blooded in their brutality.

Westlake described The Hot Rock as a one-off novel, essentially, which he was pleasantly surprised to see on the big screen in a very entertaining version, directed by Peter Yates and starring Robert Redford and George Segal in the lead roles. (The great William Goldman wrote the screenplay.) Soon enough, though, Westlake found himself drawn back to the character and his comic possibilities.

Bank Shot was the first published follow up, which I haven't read yet, but based on the sly, witty writing in The Hot Rock, I anticipated more of the same in the film version. Instead, the adaptation by Wendell Mayes takes another approach entirely.

I suspect that the answer lies with producers Hal Landers and Bobby Roberts. They teamed up to produce The Gypsy Moths and Monte Walsh before The Hot Rock. Westlake said that Goldman spent time with him to get a better sense of the characters before finishing the script; the producers and director, on the other hand, "didn't give a damn."

At the same time they were producing Death Wish (released at the beginning of July 1974), Landers and Roberts did tackled Bank Shot. Perhaps that explains why things went haywire on the project. Screenwriter Wendell Mayes was surely a very talented writer; he began in television before breaking into features with Billy Wilder's The Spirit of St. Louis. His credits include Anatomy of a Murder, Advise & Consent, The Poseidon Adventure and Death Wish.

Obviously, Landers and Roberts enjoyed working with him and/or liked his work on Death Wish, but it's difficult to see any indication in his many credits of an intentional comic sensibility. Gower Champion, so renowned on Broadway for his choreography and stage direction, had only directed one film back in 1963, My Six Loves starring Debbie Reynolds, and he seems an odd choice to helm this project.

As for Scott, his chief contribution to his character, name-changed to Walter Upjohn Ballentine and career changed from thief to bank robber, appears to have been an occasional lisp. He's presented as a brilliant planner surrounded by incompetent boobs, which is not quite how Westlake originally intended the character. In a 1997 interview, Scott admitted:"I don't know why the hell I got into that one. I guess I did it for Gower Champion, who directed it."

In general, the missteps are somewhat mystifying. Certainly, many screen adaptations have deviated substantially from the source material, both as to characterizations and plotlines, but Bank Shot was unable to come up with anything much that is clever or entertaining. That reduces the film in status and interest for anyone but a devoted 70s nut, like me.

Still, the premise is quite appealing. The very idea of stealing an entire bank -- albeit, one that is temporarily housed in a mobile home -- is very clever, and the visual of the mobile home/bank sailing down an oceanside road is outlandishly fun and ridiculous.

Note: the film is titled The Bank Shot on the print that serves as source material for the Blu-ray edition that I watched recently. It includes the trailer, which features footage shot just for the trailer with costar Joanna Cassidy (in a bathtub filled with money). The print looks pretty good and clean. It's still available on Blu-ray and DVD from Kino Lorber as of this writing.

70s Rewind is a column that allows the writer to dig deep into the windmills of his mind and ruminate on his favorite film decade.

Do you feel this content is inappropriate or infringes upon your rights? Click here to report it, or see our DMCA policy.
Donald WestlakeGeorge C. ScottGower ChampionJoanna Cassidy