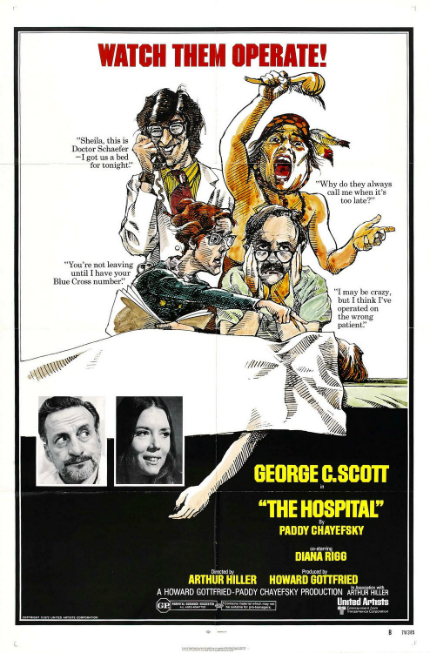 Recently released by Twilight Time on a lovely new Blu-ray, The Hospital now plays like a film that is firmly, stubbornly rooted in its era, a time when Paddy Chayefsky could fill his script with stinging, poetic screeds and George C. Scott could ramp up from zero to 60 in the span of a single sentence and leave you shell-shocked with his fury, yet reeling from his restraint.

Directed by Arthur Hiller, who got his start in live American television of the 1950s before becoming a reliable journeyman in the 1960s and then making the monster hit Love Story in 1970, The Hospital is mostly an angry diatribe against the state of the medical community. It's set in a large facility in Manhattan where the doctors and nurses are overrun by the massive number of patients they must treat each day.

Chayefsky himself narrates an opening sequence that is filled with the promise of a madcap comedy. That tone is short-lived, however, as we learn of a death that should not have been and are introduced to Chief of Medicine Dr. Herbert Bok (George C. Scott), an exhausted man whose family has fallen apart and who is contemplating suicide -- not to mention that he's been impotent for years.

Herb's impotence, of course, is not just physical but also psychic. He's achieved a position of great honor and respect, but he's drowning in paperwork and has lost touch with the passions that drove him throughout his life. He is angry with himself and angry that he is unable to accomplish anything meaningful in his profession.

Anyone who has seriously thought about committing suicide, now or in the past -- and I include myself in that unhappy 'past' group -- will recognize the brutal authenticity of Chayefsky's writing and Scott's ragged performance. Herb is capable of functioning, but he's more like a machine who gets his work done, smiles when required, and deteriorates on the inside. His emotions are corroded and fading steadily -- not that anyone else would necessarily notice.

As a means of driving the narrative forward, Chayefsky includes a slowly developing mystery that begins with that unusual death in the opening sequence. This story strand sometimes beggars belief, though it's essential to the plot; what's more important is how Dr. Herb deals with his problems. 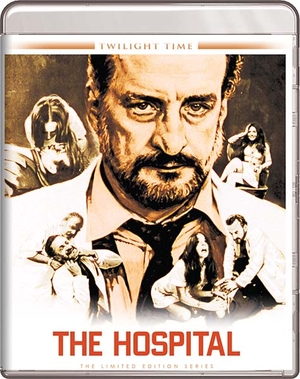 Describing director Hiller as a journeyman is not an insult but an acknowledgement of his professional talents. He never calls attention to himself through his selection of shots, but the rich variety on display in The Hospital shows that his priority was to service the material and guide the actors, and to stay out of their way with understated zeal.

In the early 1970s, George C. Scott rode his post-Patton hot streak to very good effect, making (presumed) potboilers alongside more serious work. I've been trying to catch up with everything he made, and have particularly enjoyed The Last Run, released just before The Hospital, and Rage, released the following year.

My only previous memory of The Hospital comes from a single viewing on television somewhere in that period of time. Watching it again, I realized my memory had faded quite severely, though I distinctly remember Scott saying something to the effect that he had 'raped' the character played by Diana Rigg. That memory has always pushed me away from revisiting the film.

That scene comes fairly late and, frankly, it's still troublesome to me. Rigg portrays a woman who has been living with her father on an "Indian" reservation in Mexico; her father has suffered a medical mishap while under the hospital's care, and so she has come to rescue him from modern medical care. She clashes with Dr. Bok (Scott) but in a peaceful kind of way, and expresses her sexual interest in older men.

Dr. Bok shuts her down, citing his impotence, and also alluding to his suicidal feelings, leading to an encounter in which he becomes very angry when she interrupts his privacy, he grabs her, and ... well, in the morning, she is quite lovey-dovey and he is feeling better, too, and that's when he makes reference to 'raping' her.

She was willing before, but was she willing in that particular moment later? It doesn't appear that way; here, though, Chayefsky leaves things a bit vague, and it remains Dr. Bok's story, and whatever alarm the lady might have felt is dismissed.

From that point forward, I was distracted and unsettled, and even now, days later, I feel conflicted about recommending the film for viewing. The Hospital is a pungent, otherwise worthy, strongly dramatic affair with an overlay of black comedy -- and it won Chayefsky his second Academy Award -- but definitely not for every taste.

The muted color scheme looks good on Blu-ray; the source material is in very solid shape, with only occasional usage apparent. The original theatrical trailer and an isolated music (composed by Morris Surdin) and effects track are also included.

Do you feel this content is inappropriate or infringes upon your rights? Click here to report it, or see our DMCA policy.
70s RewindArthur HillerDiana RiggGeorge C ScottPaddy Chayefsky