Jon Voight stars as the titular character, a young white teacher who comes to an island off the coast of South Carolina in March 1969.

He's been hired to fill in for a teacher on a health leave, only to discover immediately that his African-American students, aged 10 to 13, are largely illiterate and ignorant of anything that's happened away from the island, where they've all lived since birth.

Released in March 1974, Conrack is a sterling example of a 'white savior' narrative, as a white man educates the poor black 'babies,' which is how school principal Mrs. Scott (Madge Sinclair) describes the children. The teacher aims to raise up the children from their benighted state, despite the protests of Mrs. Scott, who is the only other teacher at the two-room school, and Mr. Skeffington (Hume Cronyn), the crusty, resolutely traditional (and very, very white) school superintendent, who insists that any attempts by the teacher to stray from the approved curriculum be abandoned.

Watching the film for the first time ever, I was struck by the gorgeous work by cinematographer John A. Alonzo (Chinatown that same year, as well as Vanishing Point and many others), which appears to capture the wild scenery of the island with natural light and a painterly eye. Martin Ritt's direction is pinpoint and precise, allowing each scene to breathe in a relaxed yet distinct manner.

The screenplay by Irving Ravetch and Harriet Frank Jr., their eighth collaboration with the director (including Hud and Hombre), reflects the same high, consistent standards as always, giving plenty of room for the key actors to deliver spicy dialogue, especially Jon Voight. On a very solid run after Midnight Cowboy and Deliverance, Voight nearly overpowers the material with his brash, charged-up approach, though his reins in his charm to the point that his character becomes endearing; we can sense his sincerity.

Conrack is based on a true story by Pat Conroy. Two years after the film was released, Conroy published his first novel, The Great Santini, which was transformed into a sterling dramatic film starring Robert Duvall as an extremely harsh and rigid father, more attuned to discipline than to love or affection. Conroy also wrote the novels The Lords of Discipline and The Prince of Tides, which also served as the source material for two more dramatic films; Lords is another intense drama that sticks well in my memory.

But before he began writing novels, Conroy wrote books more directly based on his own experiences, the second of which was The Water Is Wide, published in 1972. (The book has been described as both a memoir and an autobiographical novel.) 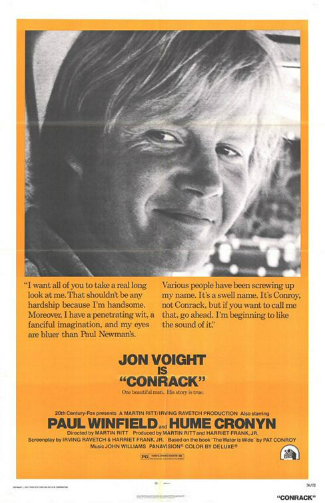 In other words, Conroy served as the direct inspiration for Voight's interpretation of the character known as Conrack. So was Voight essaying a real-life 'white savior'? And does the term even apply to the character in that time period?

Judging solely by the film version ... it's nearly impossible to say! Conroy dismisses the question the only time it's raised by an island resident. Save for a married couple who own and run the only store on the island, Conroy is shown to be the only white resident on the island.

He befriends Mad Billy (Paul Winfield), who is not so mad after all, but only because Billy wants to learn how to read and write. He comes to a standoffish detente with Mrs. Scott in time, though they never become friends. Yet the other adult residents on the island are rarely seen, only glimpsed in passing. Instead, Conroy becomes a friendly mentor to the children, a big brother, really, especially to Mary (Tina Andrews), a reluctant 13-year-old student. He hires her to provide cooking and household duties, and she gradually warms to the outgoing man.

Because Conroy's motivations remain nebulous, it's hard to get a fix on his goals. Is he only seeking experience as a teacher? (Nothing wrong with that.) Is he seeking to teach children who have apparently never received any kind of education? (That sounds good and noble.) Is he trying to rouse them up to rise above their place in life? (Edging into questionable territory, in part because his own understanding of the island and its place in history appears to be limited.) Is he seeking to educate the children about the history of black culture in America? (Not that I saw.) Is he seeking to educate the children about the devastating effects of slavery in America? (Nope.)

The last question might be redundant, since every black resident on the island is a descendant of slaves. Everyone is impoverished. Everyone is limited in their opportunities.

Conrack does not address that issue, however, and perhaps it's asking too much to expect that it would do so in that time period, especially within the studio system and the limitations of a commercial theatrical release. Director Ritt was very much consumed with making social dramas that had substance and meaning, such as The Great White Hope (1970) and Sounder (1972). Later in the decade, Ritt would direct The Front (1976) and Norma Rae (1979).

The films may have been traditionally liberal, and presented from the perspective of privileged white people, but he and his collaborators aimed, at the least, to call attention to issues that most people were not even thinking about at the time.

Twilight Time released the film on a limited-edition Blu-ray a few years ago -- it's now sold out, sadly -- and the transfer looks very good. The audio commentary by Nick Redman and Paul Seydor is quite informative; host Redman keeps the conversation moving along at a good pace, as usual, while Seydor focuses on the many, many differences between the book and the film, which is far more detailed than I could have hoped to hear.

Viewed nowadays, especially, Conrack is an eye-opening experience, a peak at life in a forgotten corner of America. I hope that it becomes more widely available on home video in the future.

70s Rewind is a feature that allows the writer to ruminate on his favorite film decade.

Do you feel this content is inappropriate or infringes upon your rights? Click here to report it, or see our DMCA policy.
Hume CronynJon VoightMadge SinclairMartin Ritt