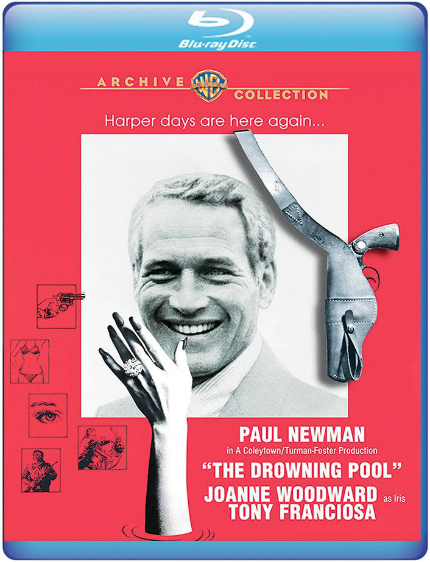 A sequel that arrived nine years after the original, The Drowning Pool follows Los Angeles private detective Lew Harper on a case that made me sweat from Louisiana languor.

Paul Newman is sterling in the lead role, stepping easily back into a role that helped make him a marquee star in 1966. Harper allowed Newman's easygoing, eagle-eyed charm to leap from the screen, leading to his bad-boy triumph in Cool Hand Luke and his populist outlaw in Butch Cassidy and the Sundance Kid.

Ten years before, Newman became a star in Somebody Up There Likes Me, though it was a long five years to The Hustler, and then another half-decade to Harper. The latter film featured Newman in practically every shot, and he was mesmerizing to watch, which is amazing because he consistently underplayed every emotion.

Warner Archive Collection recently released new Blu-ray editions of both Harper and The Drowning Pool and both look simply marvelous. Having seen both films in past years, though never back to back, I was surprised at how effectively they serve as fascinating studies in the passage of time.

On an audio commentary for Harper, screenwriter William Goldman explains how the project came to be and how quickly it all came together once Newman signed on to it. Goldman says he soon after wrote a script for a potential sequel, adapting another novel by Ross Macdonald, but that Newman wasn't interested in doing it at the time. About the eventual sequel, Goldman says only, "It flopped."

Whereas Harper was snappy and witty, and led decisively by Harper as a very smart investigator, The Drowning Pool feels like it's trying to approximate how someone raised in southern California would react to experiencing Louisiana for the first time, where everyone might as be murmuring, 'It's not the heat, it's the humidity.' 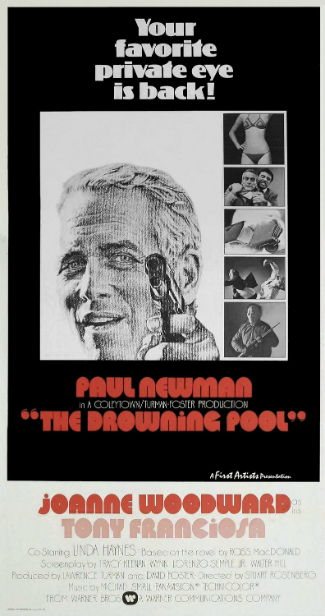 The same-titled source novel, first published in 1950, was author Ross Macdonald's follow up to The Moving Target, which served as the basis for Harper. Macdonald set his detective novels featuring Lew Archer, changed to Lew Harper in the films, in and around the Santa Barbara, California area, where he lived. According to Shawn Levy's terrific biography, Paul Newman: A Life, it was Joanne Woodward, Newman's wife, who suggested the location be changed to New Orleans.

Producers David Foster and Lawrence Turman secured rights to the book in April 1973 and hired Walter Hill, who had worked on their production of Sam Peckinpah's The Getaway, to write the screenplay. Newman agreed to star and by September 1974, Tracy Keenan Wynn was rewriting the script. Lorenzo Semple Jr. is also credited on-screen for the script, though it's not clear when he was brought in; Eric Roth is listed as an uncredited writer on IMDb, though I can't find a source for that information.

Out of that melting pot of creative thinkers emerged a story that is more concerned with languid Southern atmosphere than anything like a standard detective story, which unfurls in a fashion that encourages idle thinking. Like its predecessor, the film is told from Harper's point of view, and Newman ably embodies the character's relaxed quirks once again.

Harper was called to Louisiana by Iris Deveraux (Joanne Woodward), with whom he shared a brief affair some nine years before. (Or, about the same time when Harper was released!) Iris is trapped in loveless marriage to a gay man and is being blackmailed for another, recent affair. She wants Harper to find the blackmailer and make him stop, or else she will lose the luxurious, if madly unhappy, life she has on the sumptuous Devereaux estate. Harper barely hears what Iris wants him to do before he himself is being threatened, over and over again, and then makes slow progress on the case.

Director Stuart Rosenberg, who was coming off the excellent The Laughing Policeman and previously worked with Newman on Cool Hand Luke, WUSA, and Pocket Money, gained considerable experience in television during the 1950s and 60s. He is proficient but never showy in his direction. He is aided and abetted here by Gordon Willis, famed The Godfather cinematographer, who was on a rather remarkable run on films; his lighting is gorgeous.

The supporting actors share a tendency to juice things up, but perhaps the intention was to liven up the film with their performances to distract from the humdrum narrative. This was one of three films featuring the young and promising Griffith, all released in the summer of 1975, including the superior Night Moves and Smile.

In 1966, Harper resurrected the hardboiled private-eye genre, but by 1975, it was growing tired and worn out again. Night Moves, The Long Goodbye and others showed that a fresher approach was needed, but The Drowning Pool relied a bit too heavily on recycling Harper without recognizing the changing times. Making the titular character more passive wasn't the answer, either.

The Drowning Pool still gives off a strong whiff of melancholy, though, and makes me nostalgic for Paul Newman as a marquee star. He could make an average picture into something worth watching and savoring, perhaps a time or two.

The Blu-ray is available from Warner Archive and other retailers.

Do you feel this content is inappropriate or infringes upon your rights? Click here to report it, or see our DMCA policy.
Joanne WoodwardMelanie GriffithMurray HamiltonPaul NewmanRoss Macdonald