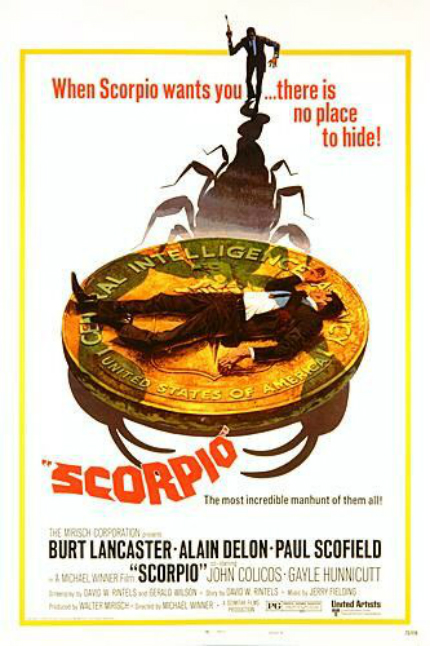 The early 1970s were a cynical time for many people. The bloom and possibilities of the 1960s were rapidly fading. In 1972, U.S. President Richard M. Nixon easily won re-election, even as the Watergate investigation was getting underway.

On the entertainment front, the so-called "New Hollywood" was hitting its stride. In his late 50s, Burt Lancaster was certainly a star from a previous generation. Because I saw Airport (1970) during its theatrical engagement, Lancaster's performance as airport manager Mel Bakersfield established his cool, calm, forceful persona in my mind.

Later I caught up with many of his earlier films, yet what strikes me on closer examination of his career is how risky it became during the 1970s. After Airport, he made the Western Lawman with director Michael Winner and writer Gerald Wilson, and then two more Westerns (Valdez Is Coming and Robert Aldrich's terrific Ulzana's Raid) before returning to the modern day in Scorpio, again under the direction of Winner.

Based on a screenplay by David W. Rintels and Gerald Wilson, the film sets up the easy friendship between CIA operative Cross (Lancaster) and freelance killer Jean Laurier (Alain Delon), who becomes known as Scorpio. After carrying out a murderous operation in Paris, the two return home to America, where we learn that Scorpio was meant to kill Cross as well.

Cross has been marked for death by the CIA for reasons that are not initially explained. But the always-suspicious Cross knows it and goes on the run. The CIA still wants Scorpio to kill him, and thus we have the balance of the tale.

Winner directs Scorpio with great clarity. The momentum of the story always moves forward and feels urgent, yet it's never advanced with haste; we understand why Cross is running and also why Scorpio is hesitant to carry out his kill order.

(What I don't quite understand from a cultural viewpoint is one brief scene in which Lancaster puts on blackface makeup at the beginning of his fugitive run so he can escape. How was blackface still acceptable as a plot device in the early 1970s in Hollywood?)

Cross runs to Europe, though he leaves his faithful wife back in the U.S. This is another narrative device that is poorly explained and makes little sense. If one can manage to put those things aside, the vast majority of the film is refreshingly adult. Suspense is built honestly and the action hits a crescendo with an expertly staged sequence just past the midway point. Late in the story, Cross and an old Russian adversary/comrade (the great Paul Scofield) spend the evening drinking and mourning the changes they've seen, as well as the things that never seem to change.

The cynical aspect of the film plays out as a sub-theme throughout, the idea that no one can be trusted forever. Eventually, the film tells us, everybody will give you up, and it's every man for himself.

Even though this is a film that rarely smiles at itself or at anything in life, Delon plays what is, essentially, the 'straight man' role, asking questions and waiting until he receives answer that satisfy him before taking action. He is as cynical as everyone else

Lancaster plays, to a large extent, against type. He's top-billed, but Delon is really the unexpected and heroic protagonist of the piece. Instead, Lancaster exudes the same cool, calm and force that he always did for me. He followed this film up with the topical The Midnight Man and continued taking chances in 1900, Twilight's Last Gleaming, Go Tell the Spartans and more. Winner reteamed with Charles Bronson for The Stone Killer and Death Wish.

The cynical cycle of films in Hollywood soon played itself out. Nowadays, most studio films are outwardly optimistic and feature heroic characters without much complexity, which only makes me foolishly nostalgic for an era when you could never be quite sure how a big-star movie might end.

Scorpio is available on a lovely Blu-ray from Twilight Time. The video transfer looks fine and the sound is good. The disk includes an audio commentary by film historians Lem Dobbs, Julie Kirgo and Nick Redman, the original theatrical trailer, and an isolated score track by Jerry Fielding.

Do you feel this content is inappropriate or infringes upon your rights? Click here to report it, or see our DMCA policy.
70sAlain DelonBurt LancasterMichael WinnerPaul ScofieldTwilight Time