70s Rewind: HARRY AND WALTER GO TO NEW YORK, Only to Fizzle, Curiously 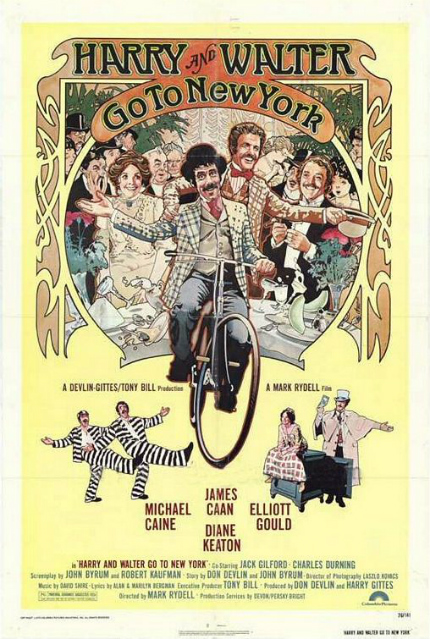 They sing! They dance! They romance! They ... fizzle, curiously, as it happens ...

Harry (James Caan) and Walter (Elliott Gould) have been in vaudeville for years, but they have failed to make much of an impact. In 1892 Massachusetts, they are scraping to get by; the longtime friends love what they are doing, but as song-and-dance men they are just OK, forcing them into petty larceny, which lands them in jail.

They cross paths with "gentleman thief" Alex Worth (Michael Caine), evidently a man of some renown (perhaps a millionaire?) who has also run afoul of the law. With his refined taste and monetary advantages, though, his time spent in the pen is a lavish affair, a mere resting place while he dreams up his next bank robbery.

Harry and Walter manage to befriend Worth and spend their time doing time by attending to his needs. One day, a newspaper journalist (Diane Keaton) and her photographer (Dennis Dugan) visit to do a story on him, which affords Harry and Walter an opportunity to break out of prison and head to New York.

The first 40 minutes or so, before Harry and Walter [Actually ] Go to New York, is quite a leisurely affair, which is representative of the film as a whole, but was that intentional on the part of director Mark Rydell? According to the audio commentary on the recently released Blu-ray from Twilight Time, who knows?

Film historians Eddy Friedfeld, Lee Pfeiffer, and Paul Scrabo say that Harry and Walter was taken away from Rydell in the preview process by distributor/financier Columbia Pictures and cut extensively. As it is presently constituted, the film runs about 111 minutes, which really becomes an issue in the third act.

Friedfeld, Pfeiffer, and Scrabo initially praise the film as deserving of a reconsideration before eventually pointing out the shortcomings on the audio commentary, which I listened to before writing this article. I don't want to repeat what they said, because I agree with most of their reservations, especially in regard to the lack of character development for the leading players.

Again, was that missing in the original screenplay -- credited to John Byrum (Inserts, Mahogany) and Robert Kaufman, with the story credited to Byrum and co producer Don Devlin -- or did the editing process excise those elements? Whatever the reason, Harry and Walter is a curiously uneven film. It's only fitfully entertaining, filled with languorous sequences that add little to either the comic intentions or the thinly-drawn characterizations.

Of the credited writers, only Kaufman (Richard Rush's Freebie and the Bean, Mario Bava's Dr. Goldfoot and the Bikini Machine) had any bent toward comedy. Actor turned filmmaker Rydell was trained during his youth as a musician, and perhaps that opportunity appealed to him most. After gaining experience as a director in television, he made his feature debut on The Fox, following that with The Reivers, The Cowboys and Cinderella Liberty.

James Caan starred in the latter title, a romantic drama in which he played a sailor on extended leave who falls for a prostitute (Marsha Mason earned an Academy Award nomination in the role), so perhaps that gave Rydell the clout he needed to helm Harry and Walter.

Caan was certainly on a roll, given The Godfather and its sequel, along with The Gambler and Rollerball. He wasn't known for comedy, though as a supporting player he was awfully charming in El Dorado and he brought a darkly comic edge to his roles in Freebie and the Bean (cowritten by Robert Kaufman) and poked fun at himself in Mel Brooks' Silent Movie.

As far as his musical talents, he'd already demonstrated those in the previous year's Funny Lady opposite Barbra Streisand, who was the ex-wife of ... Elliott Gould. In films such as MASH and The Long Goodbye, Gould had also proven he could inject doses of dark comedy into his performances. Several years before, Gould starred in Richard Rush's Getting Straight, co-written by Robert Kaufman (Freebie and the Bean).

Gould starred opposite Diane Keaton in I Will, I Will ... For Now, a romantic comedy about marriage that opened in theaters in March 1976. Following barely three months later, Harry and Walter made is theatrical debut in June 1976 and hardly made a ripple. Reviews were mixed to negative and both Caan and producer Tony Bill were none too charitable about its faults in interviews the following year.

Even with the film's limitations in mind, it's easy enough to enjoy the elements that work; the performances are occasionally wonky, perhaps due to the editing, and it's to figure out what motivates their characters have to do what they do for much of the film, yet Caan and Gould have sufficient star power to make one wish there was more to Harry and Walter.

Keaton made this and I Will, I Will ... For Now (which I've not seen yet) in between Woody Allen's Love and Death and Annie Hall, so she was still in the 'very, very promising' stage of her career. She delivers a very winning performance.

Michael Caine is absolutely terrific as a bank robber who may act in public like a gentleman, but in reality is a ruthless individual toward those he considers beneath his station in life. He deftly navigates between those points in his performance. Since he dominates the first 40 minutes of the running time, his absence materially affects the film, throwing it a curveball that not even the combined star power of Caan, Gould and Keaton can overcome.

So, yes, Harry and Walter Go to New York is a curious film. From the summer of 1976, I can definitely recall seeing the poster in daily newspapers, but nothing about it spoke to my teenage self; instead, I was more obsessed with the likes of Logan's Run. (Please see my column from last year, which explains why.) In any event, I'm glad to finally catch up with it, filling a hole in my appreciation for Caan, Gould, Keaton and Caine.

The Twilight Time Blu-ray features a fine transfer that showcases the beautiful cinematography by Laszlo Kovac, along with the aforementioned audio commentary and an isolated music track that will especially appeal to fans of composer David Shire. The original theatrical trailer is also included.

Do you feel this content is inappropriate or infringes upon your rights? Click here to report it, or see our DMCA policy.
Diane KeatonElliott GouldJames CaanMark RydellMichael Caine