Sundance 2018 Review: KUSAMA - INFINITY, Inside the Life, Work, and Mind of a Legendary Artist 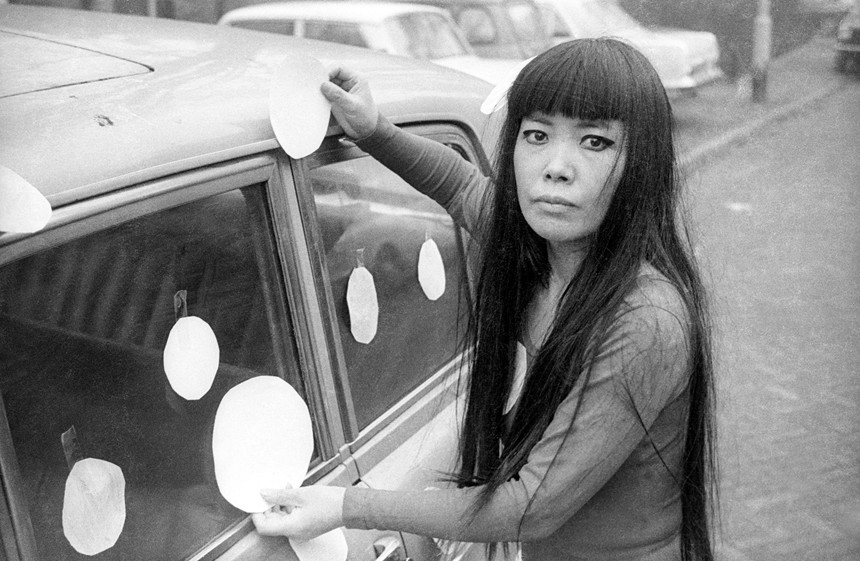 Now at the age of 88, legendary Japanese artist Yayoi Kusama is currently one of the most popular and successful artists in the world.

Her recent New York gallery exhibition, "Yayoi Kusama: Festival of Life" - featuring her signature "Infinity Mirror Rooms," with brightly colored mirror balls in a space with mirrored walls - drew many thousands of visitors, with lines stretching around the block, and up to six-hour waits to enter the gallery. Images of Kusama's work are ubiquitous on social media, her immersive and mesmerizing visual environments seemingly custom made for Instagram. Kusama's installations, paintings, and sculptures tour around the world practically non-stop, and command top prices at auctions. One of her 1960s paintings sold for $7.1 million at a 2014 Christie's auction, a record for a living female artist.

That's the spoiler alert happy ending to the fascinating life story told in Heather Lenz's documentary Kusama - Infinity. It was a long and difficult road that Kusama had to take to this happy end, battling sexism, racism, and mental illness to pursue and fulfill her artistic dreams. Lenz's presentation of Kusama's story, as far as documentaries go, is fairly standard issue: talking heads, archival footage, etc. But that's fine, because lots of screen time is also devoted to the many incredible images Kusama created over the years, images directly drawn from childhood trauma and the hallucinations that plagued her, beginning from age ten.

Belying its brief running time of less than 80 minutes, Kusama - Infinity - well over a decade in the making - is a satisfyingly thorough look at the life and work of this influential artist, tracing the inspirations, obsessions, passion, and psychological trauma that informs every aspect of her art. Kusama's work spans across an amazingly diverse array of media: installations, painting, sculpture, film, literature, performance art, fashion design. Kusama, however, is best known for the iconic polka dots that are the signature motif of her work, which spring directly from the hallucinations that she began experiencing as a young girl.

Without being too much of an armchair psychiatrist, it's easy for one to infer that her mental health was not well served by her upbringing in an affluent family in Matsumoto City, Japan, who, while on occasion being art patrons, nevertheless actively discouraged Kusama's own artistic pursuits. This, along with being thrust in the middle of the enmity between her parents, and dealing with an abusive mother, left Kusama with deep emotional scars. Nevertheless, Kusama attended art school and began exhibiting her paintings in the 1950s.

Frustrated with the provincialism of the art scene and of Japanese society in general, Kusama left for the US, after corresponding with the artist Georgia O'Keeffe. She eventually settled in New York City, where she quickly became a major figure in the avant-garde art scene, participating in art movements of the time such as Pop Art, Abstract Expressionism, and Minimalism. Kusama also forged friendships with artists such as Donald Judd and Joseph Cornell.

In the 60's, Kusama also staged elaborate performance art pieces - or "happenings," to use the parlance of the time - often involving nude performers which she would adorn with her signature polka dots, many of them protesting the Vietnam War. While Kusama's art and performances brought her much fame and notoriety, it brought her very little fortune. Lenz powerfully demonstrates how sexism and racism placed formidable barriers separating Kusama from the success that her male colleagues enjoyed. Even worse, some of Kusama's ideas were stolen by other artists. The film more or less accuses two of the most famous artists of the era, Andy Warhol and Claes Oldenburg, of this sort of pilfering: Warhol for one of his large-scale paintings, Oldenburg for the soft sculptures for which he became world famous.

Kusama returned to Japan in the early 70's, where she continued to create, but her exploits in the US brought her negative attention in Japan, where she was essentially isolated and ostracized. Her mental and physical health grew progressively worse, and in 1976 she voluntarily checked herself into a hospital for the mentally ill, where she took up permanent residence, and where she lives today. The studio where she produces her art is a very short distance from the hospital.

This hospital is where she speaks in the film's present-day interviews, wearing her iconic bright orange wig and clothing festooned with polka dots. At long last, in the later stages of her life, Kusama at long last is enjoying the fruits of the revival of interest in her work that began in the late 1980s, and now has brought her the artistic and financial success that eluded her in her younger years. Though not without hints of poignancy - a close friend of Kusama says that even though she's world famous and financially successful, she still feels lonely - Kusama's survival and irrepressible creative energy is an inspiring example for us all, especially for women, and women of color in particular, who still must struggle for recognition in a world that often seems determined to stack the decks against them.

Kusama - Infinity had its world premiere in the U.S. Documentary Competition at the Sundance Film Festival and was recently acquired for distribution by Magnolia Pictures.