Guillaume Renard and Nishimi Shôjirô have created a French-Japanese anime which is apocalyptic, rude, and at times visually stunning.

Last year, French comic-book publisher (slash-gaming-company) Ankama and the Japanese animation legends of Studio 4°C released a joint effort which has to be seen to be believed: the urban action science-fiction satire Mutafukaz.

Based on Ankama's edgy comic-book series of the same name, Mutafukaz tells the story of Angelino, a strange boy with a large black bubble-head, who lives in Dark Meat City, a hyper-stylized version of Los Angeles' ganglands straight out of a Grand Theft Auto videogame. He's just wasting time with his friends (a burning skeleton and a demented kitten-like creature), trying to survive life in the ghetto, doing all sorts of odd jobs.

But one day, he starts noticing that there are tentacles growing out of some people's shadows. When he gets overheard mentioning that, it brings trouble to his doorstep, and he suddenly gets targeted by alien monsters, deadly law enforcers, gangsters, and even alien law enforcing gangster-monsters. In fact, the only thing keeping Angelino alive is his newly developing set of superpowers... As the in-screen captions state: what the hell is going on?! 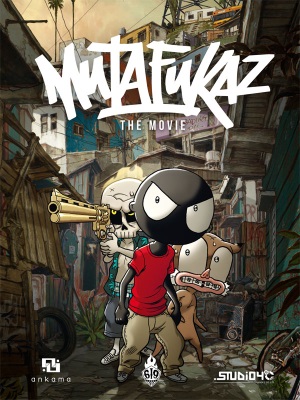 Directed by the comic book's creator Guillaume Renard and anime veteran Nishimi Shôjirô, Mutafukaz is a wild affair indeed. Its story isn't all that special, as it is one of many teenage-boy-discovers-he's-special-and-has-to-become-a-hero tales, but if the devil is in the details, this film is truly diabolic.

All the backgrounds in the film have been meticulously painted and mapped to create a moving environment (check out the film's trailer to get a better idea of what that looks like). Rest assured that when the eventual Blu-ray arrives, I will be pausing the image often, just to check out all the incredible artwork which has been plastered there, in layers upon layers. Shôjirô Nishimi was animation director (and character designer) on Michael Arias' amazing 2006 anime Tekkonkinkreet, so it is no surprise that Mutafukaz' Dark Meat City can stand proudly side by side with Tekkonkinkreet's Treasure Town.

Like with the story, the characters themselves unfortunately never become as cool or innovative as the designs used to portray them. Maybe the comic books fleshed them out more, but the film keeps it all pretty shallow. It sure as hell is pretty though, and a blast to watch.

Apocalyptic, rude, and pushing the bounderies of good taste, Mutafukaz is a perfect title for the revived Rotterdämmerung programme at the International Film Festival Rotterdam. Audiences thought so too, and awarded the film a whopping score of 4.3 out of 5, which bumped it into the festival's Top-30. Which is fine with me. 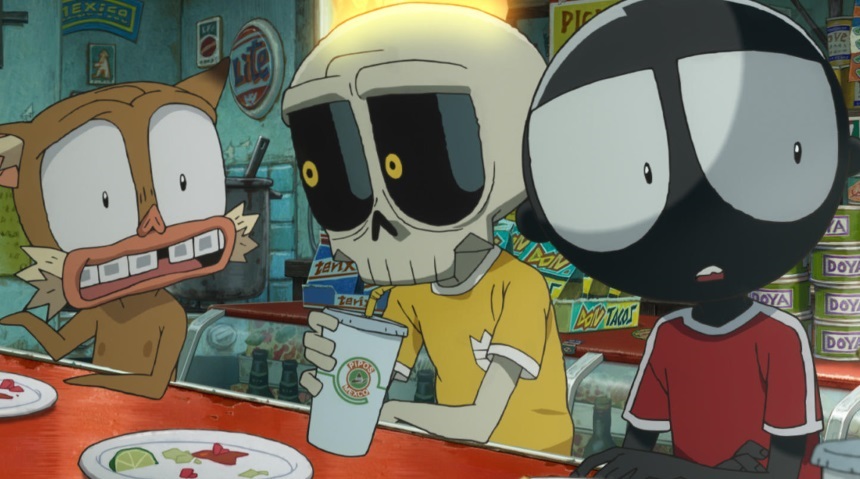