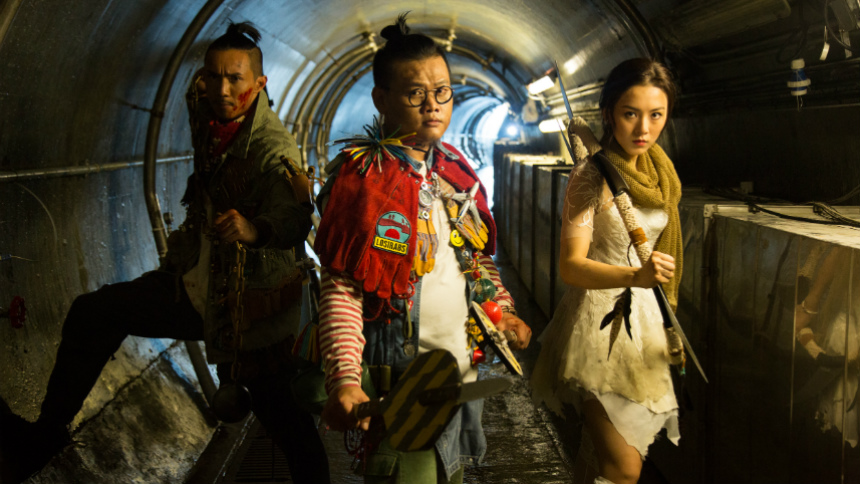 Run for your lives: zombies are coming! But first, meet the leading players!

Zombiology: Enjoy Yourself Tonight (originally titled Gam man da song si) plays more like a warm-hearted relationship melodrama than a zombie thriller. That's a good thing, though. Filled with likable characters and leavened by an irresistible sense of comic fun, the film is a very promising feature debut for director Alan Lo Wai-lun, and an altogether charming experience for audiences.

Styling themselves as superheroic characters straight out of a manga or anime, Lone (Michael Ning) and his longtime friend Yeung (Louis Cheung Kai-chung) both come from families with troubled histories. Lone's mother died when he was young and his father Wing (Alex Man Chi-leung) has spent the past 15 years in prison due to his responsibility for a tragic accident that took the life of an old friend.

Lone has been cared for by Aunt Shan (Carrie Ng K-lai), who was left disabled by the accident that killed her brother. Wing shows up, fresh from prison, looking to make amends with her, which sets in motion the film's primary narrative thread.

Meanwhile, Lone and Yeung are introduced further thanks to Yit (Cherry Ngan Cheuk-ling), who is Shan's niece. Yit is young and bright and has a video camera. She has recently returned from a stint abroad and easily attracts the romantic interest of Yeung, but the more significant point about her, plot-wise, is that she is a member of a group that is interested in all-things supernatural. Thus, she's the first one alerted when zombies invade Hong Kong. For whatever reason, authorities never arrive on the scene, at least where our heroes are fighting for their lives.

By that time, when zombies have started to appear in greater numbers, the lead characters have all been sufficiently sketched -- and/or manipulated madly, depending upon your mood -- to elicit empathy for their situation. They're all quite likable people and try to do the right thing for their fellow humans, readily sacrificing their own self-interests to help others.

As mentioned, however, comic twists arise to ensure that things don't get too dark. Director Lo, working from a script by Cheuk Nick, Ng Nero and Pang Chi Hoi Pang that is based on his own short film Zombie Guillotines, as well as a popular novel, shifts gears joltingly from one emotion to the next, which inevitably reminded me of my first experiences watching Hong Kong movies nearly 20 years ago, when I had no context or understanding, yet fell in love with jolting tumult and often soaring action sequences.

It becomes evident that Lo is reaching for something fresh and modern to say about young people in modern-day Hong Kong and seized upon the idea of zombies to galvanize change, to snap characters like Lone and Yeung into action and out of their post-adolescent inertia, to leave behind their indecisive ways and make something happen. This leads to a third act that struck me as overly ambitious, unsupported by all that goes before. Maybe, though, that is Lo's intention, to raise questions without providing the expected answers.

Admittedly, it's been a long time since I've been able to spend as much time as I once did in tracking and consuming Hong Kong cinema, so I am definitely out of touch with what's happening there, filmwise, and how Zombiology: Enjoy Yourself Tonight compares with the region's recent offerings. Still, I thoroughly enjoyed what I watched, a film that is consistently engaging and feels fresh to these aging eyes.

The film will be available on a variety of Video On Demand platforms on Friday, February 23, 2018, via Dread Central Presents and Epic Pictures Releasing.

Do you feel this content is inappropriate or infringes upon your rights? Click here to report it, or see our DMCA policy.
Alan LoAlex ManCarrie NgChinaHong KongKai-Chung Cheung