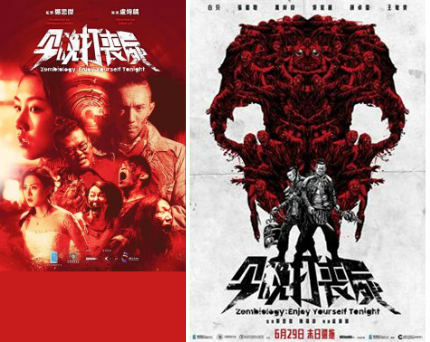 Heading for release in Hong Kong on June 29, Zombiology: Enjoy Yourself Tonight follows what happens when "a monster from Lung's favorite animation appears in the city ... and turns people into zombies."

That's from the rather lengthy plot summary at IMDb. These are running kind of zombies, not George A. Romero's slow walkers, so this may not be for traditionalists. But if you can roll with that, it looks promising.

Lung (starring Michael Ning) and Chi-Yeung (starring Louis Cheung) are two eccentric hot-blooded young men leading a devil-may-care life. They deem themselves as heroes that can save the earth.

However, Lung can do nothing about things in life that don't work out as he wishes: he has to move out from where he has grown up; his step-mother Shan (starring Carrie Ng) has chronic depression; he finds his father (starring Alex Man) who's just out of jail so annoying to get on with; his friend Chi-Yeung is fervently chasing a girl named Chan-Yat (starring Cherry Ngan) while his own idol, a star called Yee-Sue (starring Venus Wong), is still unreachable.

In the meantime, a monster from Lung's favorite animation appears in the city out of reason and turns people into zombies. The outbreak of this zombie crisis is followed by a widespread chaos all round. Even Lung's neighbors have become zombies as well.

Lung's father happens to be out of town traveling with Shan. And Chan-Yat has gone missing too. Lung risks his life to break into the infected town in order to take her back home and meanwhile realizes he is merely a loser and slick talker. But he decides not to avoid anymore and to fight a battle against zombies tonight.

Alan Lo directed; he previously helmed the shorts Zombie Guillotines and After Lasik. Watch the trailer below and tell us what you think in the comments, please.

Do you feel this content is inappropriate or infringes upon your rights? Click here to report it, or see our DMCA policy.
Alan LoCarrie NgCherry NganHong KongLouis CheungMichael NingVenus Wong