Review: BEFORE WE VANISH, What Makes Humans What We Are 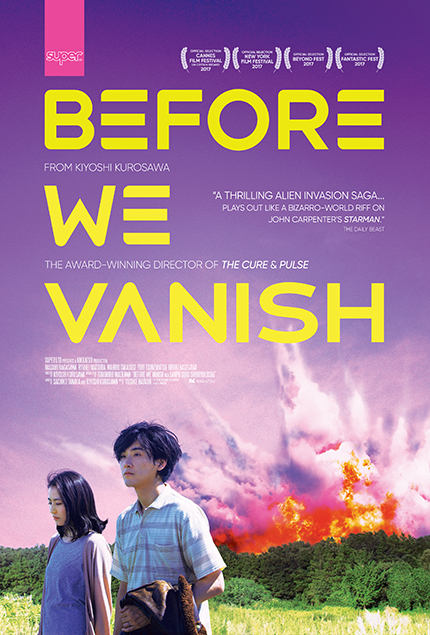 An alien invasion film, made by Kurosawa Kiyoshi? That almost sounds too good to be true. And it is, kind-of. Yes, there is an alien invasion, but not surprisingly, Kurosawa is not much interested in displays of grand destruction, monsters and huge spaceships. Instead, the focus here is on what makes us, humans, what we are.

Based on a popular Japanese stage-play by Maekawa Tomohiro, Before We Vanish tells the tale of three alien scouts, who have traveled to Earth to annihilate us and prepare the planet for colonization by their own species. Each of these scouts takes over the body of a human, and starts examining his or her surroundings.

The aliens are remarkably laid-back about their invasion, basically just walking around, killing the occasional human whenever they feel threatened, and telling passers-by that "Hi, we're here to annihilate you and colonize your planet. Can you help us?" And of course Earth is doomed, as the people these aliens meet are just too damn polite not to comply.

Also, whenever the aliens spot a human trait they find intriguing, they steal it. As they take concepts like "work", or "family", or "home" from a human, the aliens learn it but the human they took it from loses it. This means the authorities have two baffling cases to solve: three aliens who have a total disregard for other people's lives, and a growing army of dysfunctional people who, each through lack of a different concept, do no longer fit into normal society.

This invasion is witnessed by two people who act as guides for the aliens. One is a journalist who stumbles across two of the scouts during a murder investigation, and he smells the scoop of a lifetime. The other is a woman who suddenly finds her husband to be more estranged than usual.

While the journalist plotline provides us with the exposition and moves the narrative forward, it's the husband-and-wife story which delivers the emotional core of the film. Narumi is at first dismayed when her abusive philandering husband Shinji is suddenly changed into a dependent emotionless child, but as the alien scout within him picks up a combination of traits and concepts from the people they meet, he grows into a protective and devoted companion. He basically turns himself into the husband of her dreams, and while Narumi isn't happy about the upcoming annihilation of Mankind, she's delighted to be with the man she initially fell in love with. Shinji and Narumi are played by Matsuda Ryûhei (of Nightmare Detective and The Raid 2: Berendal fame) and Nagasawi Masame (Our Little Sister and I Am A Hero), and they manage to sell this strange couple they make.

We all know and love Kurosawa Kiyoshi for his cerebral ice-cold examinations of the human condition, in horror thrillers like Cure and Pulse, but here he also shows a softer side. Before We Vanish may start with a crass massacre, and has violence and jet-black humor peppered throughout its (admittedly too long) running time, but Kurosawa's heart seems to be mostly with the more sedate central love story.

In H.G. Wells' novel War of the Worlds, the Martian aliens succeed in their invasion yet fail immediately afterwards, as they fall victim to Earth's many germs. In Before We Vanish, our planet similarly proves to be both easy to conquer yet containing some baffling surprises. And while the plot used here is as cringe-worthingly cheesy as most alien invasions tend to be, many viewers will find plenty of worth in the emotions on display.

As the aliens keep saying in the film: "This is interesting. I'll take it!"

Review originally published during the Camera Japan film festival in October 2017. The film will open in select U.S. theaters on Friday, February 2, via Super LTD.

More about Before We Vanish