BEFORE WE VANISH: Watch The Trailer For Kurosawa's Arthouse Scifi 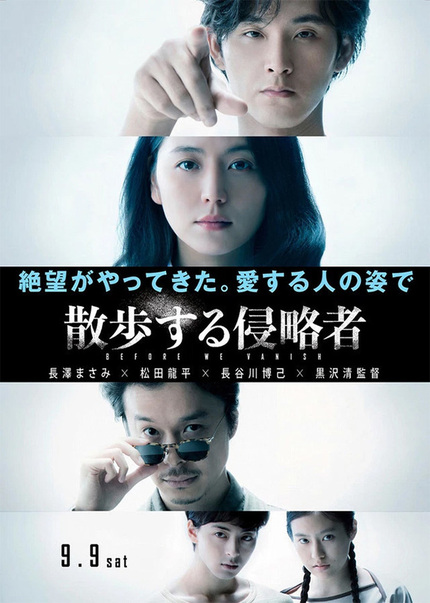 Japanese arthouse-genre fave Kurosawa Kiyoshi returned to Cannes this year with his latest effort, low key alien invasion picture Before We Vanish, as part of the Un Certain Regard selections.

Narumi and her husband Shinji are going through a rocky patch when Shinji suddenly vanishes, returning several days later, utterly transformed. He seems to have become another man entirely, loving and attentive. At the same time, a family is brutally murdered, and the town beset by strange phenomena. Journalist Sakurai begins to investigate the mystery…

True to form for Kurosawa this latest effort is driven far more by concepts and ideas than action or adrenaline and the general response at the festival was quite strong. It'll likely be a bit of time yet before audiences in North America get the chance to see the film but with the Japanese release now coming up the first theatrical trailer for that release has arrived online. The VFX work looks more than a little but dicey but its fascinating to watch star Matsuda Ryuhei sliding into this sort of more middle aged role under the guidance of such a strong hand. Take a look below.

More about Before We Vanish