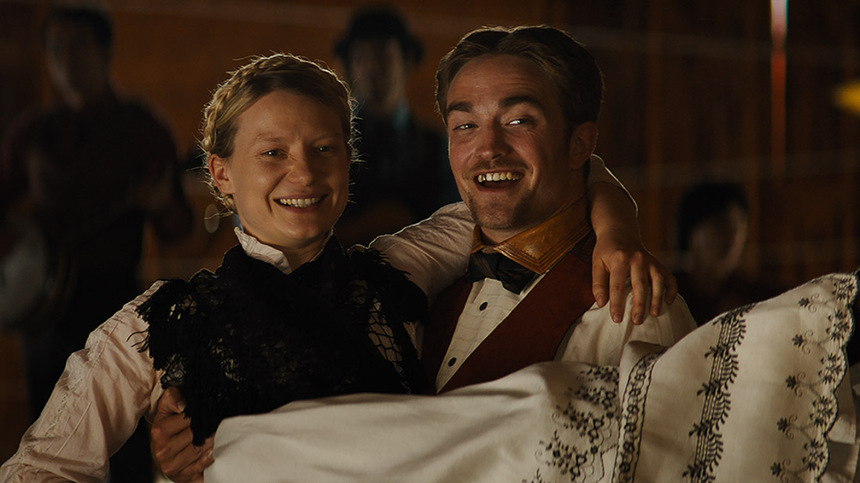 Western tropes get punched straight in their often male-driven faces by a heroine in the Zellner Brothers' Damsel, where the protagonist is only in distress when dealing with the pathetically entitled males that cross her path. The fantasy of macho bravado associated with the genre thanks to the likes of Eastwood and Wayne, is subverted and exposed for all the fragility in its silly white protagonists. In other words, old-fashioned grandpas who love to see traditional visions of masculinity will be disappointed. For those willing to see these clichés be smartly ridiculed, the dark slapstick humor will be a refreshing surprise.

Returning to vast American landscapes after taking on the Midwest with Kumiko the Treasure Hunter, the Zellners place their story in an unspecified Wild West location where there is a desert, a forest, and an ocean without any geographical commitment. The year is also not noted, but it's easy to understand where we are in the history of male and female relationships and in the interactions between white men and Native Americans.

Our guide into this fictitious land is Samuel (Robert Pattinson), a lanky and colorful would-be cowboy who is searching for a preacher to marry him to his beloved Penelope (Mia Wasikowska). But first, they must rescuer her, because according to Samuel’s narrative, his beloved damsel has been kidnapped by ruffians Anton Cornell (Gabe Casdorph) and his brother Rufus Cornell (played by Nathan Zellner). Coming off from an urban and modern American performance in Good Time, Pattinson again reveals himself as an assuming chameleon that is capable of more than he is given credit for.

Pattinson's twang and erratic behavior paints the portrait of a guy who thinks of himself as a good guy, but who might in fact be a possessive and obsessive lover. A flashback, likely idealized in the character’s imagination shows Samuel and Penelope joyfully dancing with a crowd. The actor goes all in and plays for laughs. Along for the ride is Butterscotch, his adorable miniature horse. He continues with the Zellners’ tradition to include irresistibly cute animals in their films. Can't wait for that Bonzo, of Kumiko the Treasure Hunter fame, and Butterscotch spin-off.

One early scene redefines the concept of a dick-measuring contest among men. Pattinson arrives at a bar in a ghostly town and is verbally emasculated when he is not able to down a shot of strong liquor. The two men follow this by comparing each other's Adam's apple, which are very pronounced and serve as proof of their manliness (at least in their minds). Samuel's gland is less of a shower and thus he is humiliated.

Romantic Samuel eventually finds his drunken preacher, Parson Henry (played by David Zellner), a man whose faith and confidence appear similarly shaky. He agrees to follow Samuel back to where Penelope lives. The former construct a tale of an undying love between them, locket in hand. Zellner's performance takes prominence as the plot unfolds and the subsequent male characters show their true colors. It's a subdued performance that grabs onto the pitiful, at times uncomfortably endearing, lens through Parson Henry sees his reality. There is no malice in him, but that doesn’t absolve him from being oblivious to his chauvinist behavior. It’s both admirable and delightful to witness the Zellners take on unflattering, yet vivid roles in their own projects.

Once we met Penelope in the flesh, Samuel's version of the facts is dismantled, and she violently and assertively makes it clear that they will no be together, but as a male who believes the decision to marry is unilateral he takes no for an answer. A frontierswoman through and through, Penelope loses the actual love of her life in a gunfight that sends her on a journey with Parson Henry as her reluctant companion. Wasikowska takes control of the movie from this point forward. Penelope is not interested in pleasing anybody. Her own interests are a priority, and if that involves throwing a few punches or heavy objects here and there, then so be it.

Off-putting for some, the gruesome violence and the pain that is inflicted on some of the male characters that aggressively try to court Penelope is a blatant statement against the injustices male-dominated societies that succeeds because of Wasikowska’s potent delivery of the character’s no-nonsense stand. Resolute about her disinterest in marrying a man that she doesn’t love, Penelope becomes a righteous female iteration of those iconic Western bucks, but in this case her cause is to assert her independence. She is a self-sufficient damsel.

Naturally, her wandering suitors’ comical efforts to woe her amplify the Zellners’ sardonic storytelling style. However, just like with Kumiko, there are poignant undertones that hide behind the most quick-witted line of dialogue or physical gag. These directors know how to mock a classic genre while having something to say about its outdated ideas in the context of 2018. Part of the disguise that could fool some into thinking Damsel is just another 1800s tale is its craftsmanship.

Epic vistas overflowing with promise and night sequences that appear to veer into the spiritual but then don’t, construct this façade, but it’s just that. A cowboy’s best friend, his majestic horse, is replaced by a miniature one that’s more of a burden than a resource; the valiant hero whose mission is to save the girl is turned into a reckless fool, the preacher in charge of protecting traditional values is himself a lost cause, and most important, the lead woman here is not responsible for providing anyone with a fresh start or a reason to persevere. They need to find their own.

Laughs are aplenty in this savagely enchanting Zellner creation, but if you don’t laugh, then you might have gotten offended. That’s on you, not on Penelope, if those guys around her weren’t such swine’s then maybe their faces would be intact.

Do you feel this content is inappropriate or infringes upon your rights? Click here to report it, or see our DMCA policy.
DamselDavid ZellnerMia WasikowskaNathan ZellnerRobert PattinsonSundance 2018