Review: THE COMMUTER, Liam Neeson Fighting Strangers On A Train 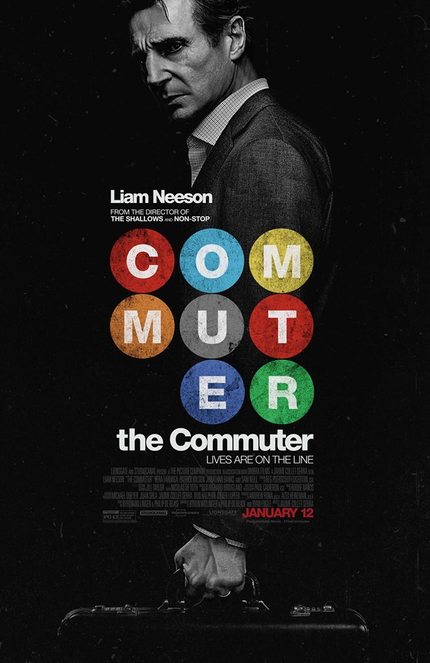 It's hard for me to believe that it's already been a decade since audiences were Taken aback by Liam Neeson's cinematic metamorphosis from "serious" actor to mainstream action superstar. Yes, he'd dabbled in genre films (heck yeah, Darkman!) over his long career, but it seemed like he was settling into his second act in life, as it were, carving out a niche for himself as one of the most respected performers on the big screen. However, with the gut punch of Taken, a new Liam Neesons was born. And not unlike the late, great Charles Bronson, Neeson's rebirth has created a brand new life for an already impressive body of work.

It seems that no one better understands exactly how to harness Neeson's unique mix of “who-me?” affability and brooding menace than director Jaume Collet-Serra, who - with The Commuter - embarks upon the pair's fourth collaboration. The Michael Winner to Neeson's Bronson, Collet-Serra is able to utilize the lanky Irishman's personality and very particular set of skills in a way that works incredibly well for the both of them in creating endlessly entertaining potboiler action films that completely understand their place in the market and the what their audience expects. Lean, mean, and smart enough to know when not to be too smart, The Commuter is a fantastic punch out between Neeson and whoever dares to get in his way.

Neeson, in a stretch, plays Michael MacCauley, an Irish immigrant insurance salesman/former cop who is having a terrible, horrible, no good, very bad day. When he gets on his usual commuter train home just as he has for the last ten years, he is met by Joanna, played by cartoon Bond villain, Vera Farmiga, who makes him a very vague offer that seems harmless but turns out to be anything but when he picks up a bag full of cash left by the mystery lady and pretty quickly, people start to die.

Joanna gives MacCauley a job to do that must be done in the next few stops or the people he loves will suffer. Already bleeding emotionally from a day that couldn't possibly have gone any worse, MacCauley sets about handling his - and her - business, but something doesn't smell quite right and he quickly realizes he's bitten off more than he can chew. Joanna, via some wonderfully stilted voice acting over phone calls, indicates to Michael in no uncertain terms that she's not a woman to be trifled with, and Michael decides to fight back. That's when things get really crazy.

Gun fights, fist fights, train derailments, dead bodies, paranoia, and tons of sweat punctuate the next hour of The Commuter as Neeson attempts to wring the truth from this very dangerous situation. And I'll tell you what, some of the writing in the film may be dumber than a sack full of quarters, but I'll be damned if I wasn't grinning from ear to ear watching Neeson go through the wringer as the film plays out with one ridiculous action sequence after another.

Collet-Serra and his writers, Bryon Willinger, Philip de Blasi, & Ryan Engle, do wonders with a script that knows when to hold 'em and when to fold 'em as The Commuter is a masterpiece of efficient storytelling. While the film is clearly a tribute to the Hitchcockian McGuffin trope in which we, and our protagonist, are sent on a chase after some deliberately vague truth, The Commuter never attempts to get too smart with the material.

There are numerous allusions to a conspiracy, but it is never clarified what the conspiracy concerns because it really doesn't matter a whit. It's just the push that Neeson and team need to take the audience on a wonderfully violent and tense ride. If the writing team was great at determining exactly what the film needed to show and what it didn't, Collet-Serra was equally good at expressing their ideas on screen. A brilliant montage opens the film that highlights the banality of MacCauley's life as a husband, father, and worker bee that helps the audience relate and buy into his sudden transformation into a face-punching badass, just because it's something different.

The tension in the film builds in a reliably brilliant manner as Neeson's situation becomes more and more grave in more or less real time. The simplistic plot detail and minimal exposition dialogue frees up space for the writers and director to give the audience what it wants: more of Liam Neeson punching people in the goddamned face, and it works like a charm. The tension ratchets up at a steady pace which goes from minor emotional discomfort to holy-shit-what-the-hell-just-happened over the course of the film, and by the end, we've bought into MacCauley's plight and want nothing more than for him to make those sum' bitches pay.

The Commuter's cred is bolstered by strong supporting performances by an impressive pair of supporting actors in Sam Neill and Patrick Wilson. The former doesn't have much to do, but does it well, nonetheless as one might expect, and the latter absorbs Neeson's temperament and delivers a solid performance that turns out to be one of the most crucial elements of making the film work. The film is, no doubt, a man's movie, with very little in the way of a feminine touch, but when you look at the world this film exists in, it's hard to see fault in that. Not every film has to be everything all at once, and The Commuter understands its niche and executes effectively.

The Commuter is the rare film that knows exactly what it is, exactly what is expected of it, and delivers. No more, no less. Collet-Serra and Neeson understand each other on a subconscious level and their bond makes this film one of the most flat-out unpretentious, entertaining films I've seen in a long time.

More about The Commuter