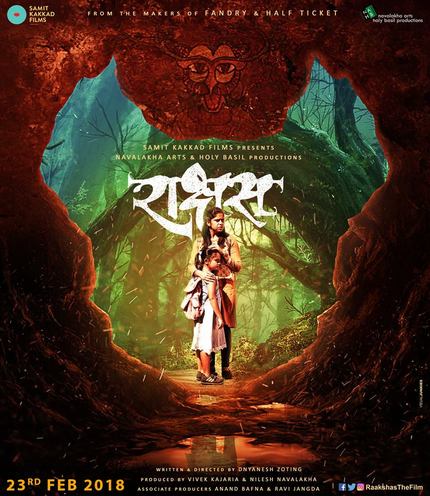 2017 was kind of a light year for genre films in India. There were a few stand out productions, but the general mood in the country was pretty tense, and that seemed to lend itself more toward either dramas or broad comedies. 2018, on the other hand, is looking up with a pretty impressive number of horror/action/fantasy films on the way. One of the many interesting projects film fans can look forward to is debutante director Dnyanesh Zoting's Raakshas (The Monster).

The script of Raakshas was a selected project of the Drishyam Sundance Screenwriting Lab in 2015, and the film has so far garnered a lot of interest among genre film fans I've talked to in India. This Marathi language project was produced by Nahalaka Arts and Holy Basil productions and is presented by Samit Kakkad Films. These names won't mean much to casual film fans, but these companies are responsible for some of India's finest independent films of the last several years, including Nagraj Manjule's Fandry and Samit Kakkad's Half-Ticket.

The trailer doesn't give away much, but it does manage to create a really solid atmosphere, and it definitely has its hooks in me. Raakshas stars Sai Tamhankar and Sharad Kelkar in key roles.

The film is to be released in Maharashtra in India on the 23rd of February, and is currently making the festival rounds elsewhere. I found this synopsis from it's upcoming showing at the Canada Kids Film Festival:

A Documentary Film maker, who is covering the protest of a remote forest tribe, goes missing. His little daughter, who spends most of her time reading fairytales, accompanies her mother in search of the man. The quest gets fulfilled when the reality and fantasy come together to unfold an ancient tribal myth.