Review: Errol Morris' WORMWOOD, a Masterpiece for Our Dark Times

One of the most inventive, refreshing cinematic events you will likely see this year, whether on Netflix or in a movie theater. 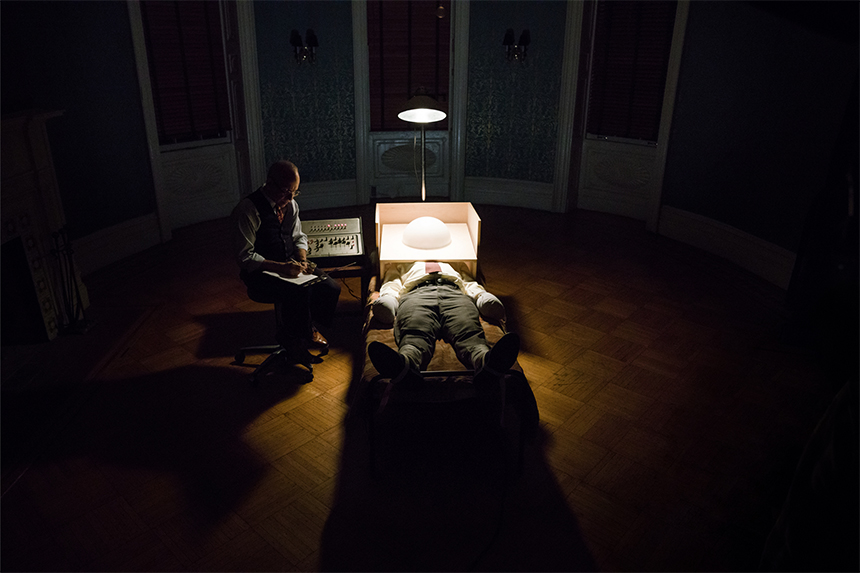 One man's 60-plus years of obsession to find the truth about his father's death is the subject of the master documentarian Errol Morris' latest magnum opus, Wormwood, a 6-part Netflix series and/or 240-minute standalone movie.

It is one of the most inventive, refreshing cinematic events you will likely see this year. But this genre bending, indefinable whatsit is not really new to Morris. He made his groundbreaking docudrama, The Thin Blue Line, almost 30 years ago. It was the first 'true crime' documentary, and put him on the cinema map, utilizing cinematic reenactments along with a series of interviews, and spawned countless imitators. The film upset many genre purists then. But whether it was interests of the cinephiles or not, in the end, the film actually exonerated its subject Randall Dale Adams from a death row. Talk about cinema with real life consequences!

Looking through his diverse filmography since then, which includes A Brief History of Time, Mr. Death, The Fog of War and The Unknown Known, what always shines through is not his manipulation of medium, it's his clear-eyed quest for truth. It's always been about his meticulous search for truth by any visual, narrative means necessary -- remember his interrotron where you and your subject converse, staring right into each others eyes through his mirror/camera contraption?

Well, he doesn't use interroton in Wormwood, but instead a scripted narrative, acted out by esteemed actors -- Peter Sarsgaard, Molly Parker, Tim Blake Nelson and Christian Camargo -- and melding it expertly with long, multi-angle shot, wordy interviews, Morris creates something that is truly masterful and meaningful.

Wormwood definitely feels more like the expansive version of The Thin Blue Line, in which finding the truth is much more complex and the consequence of it has a grander implication to all of us and our nation rather than one person. I'm very glad that Netflix has given a filmmaker like Morris a blank canvas to play with. The series format fits the project well to tell a complicated story, rather than a typical two-hour film.

It concerns Eric Olson and his lifelong quest for the truth about the death of his father, Frank Olson, a military scientist who died in mysterious circumstances some 60 years ago. Frank was involved in MKUltra, a project where the US government experimented on mind control using LSD on volunteer subjects, along with other secret government projects.

One day in 1953 during a trip to New York, according to his superiors, he 'fell' from his 13th floor window of his hotel room. It said that it was possible that he might have 'jumped' while under the influence of the drugs. Without any prior drug or mental problems, for his family, this 'accident' came as a shock. Eric, still young, couldn't comprehend what they said. Fall and jump were two very different words and he struggled to reconcile the two.

Like many of Morris' subjects, Eric Olson is a brilliant and obsessive man. He's an extremely articulate man who might have had a promising career if it wasn't for his tireless search for the truth in his father's murder. Morris' interview with him, which takes up a large part of the series throughout, are compelling and absorbing, as he gesticulates wildly in split screen/multiple angle shots. He describes his investigation on the matter as collages and Morris visually makes the best out of these Olson's descriptions.

Olson is a tragic figure, who has spent six decades of his life devoted to finding the truth because he couldn't walk away from his father's ghost. For that, Morris uses and constantly goes back to the scenes in Lawrence Olivier's Hamlet. For any other filmmaker who uses metaphors, it would come across as corny. But not with Morris: everything feels well suited and purposeful.

The Rockefeller commission investigated the CIA in 1975 and the headline on the Washington Post read "Suicide Revealed." Eric realized that headline referred to his father. The report concluded that Frank Olson had been surreptitiously dosed with LSD a week before his death. The Olson family receives an in-person apology from President Ford and a set of documents explaining the event from CIA Director William Colby. But for Eric, the jumbled document doesn't make any sense but only adds more questions. The government is definitely hiding something and trying to quash any more inquiry from the family.

With wealth of home movie footage, documents, reenactments and series of interviews, Morris goes on like an investigative journalist with visual flair or a collage artist. Wormwood works like gangbusters as a 'true crime' doc and it's thrilling to watch. Every little thread is meticulously investigated, each with the same weight and importance.

Rightfully so, as they touch upon America's dark secrets: mind control experiments, germ warfare during the Korean War, brainwashing, Donald Rumsfeld and Dick Cheney... One revelation after another, Morris makes Olson's case for the truth playfully and cinematically but with resonance.

Shot by Igor Martinovic and Ellen Kuras, Wormwood looks and feels like a film noir. The period settings and somber mood are beautifully realized. The scripted narrative is mostly visual storytelling as it plays out like a silent film. Peter Sarsgaard, Molly Parker and Christian Camargo give deeply nuanced performances in their roles.

After exhuming the body of his father for further examination of any wrong play, and learning about discrepancies while talking to his father's surviving superiors and colleagues, Eric reconnects with renowned investigative journalist Seymour 'Sy' Hersh.

The year is 2013. Hersh once told Eric to let go of the matter before. He deemed it was impossible to go against the government as he hit the brick wall. But after new evidences Eric dug up, Hersh reconsiders the case, and concludes that it was definitely a murder case. That Frank was murdered and perhaps thrown out the window to his death for what he knew. Possibly regarding the illegal germ warfare. But for protecting his source, Hersh stops short of publishing his findings. Eric now knows the truth. But there won't be any accountability for Frank's murder. Not just yet.

For its namesake, Wormwood is a timely representation of our troubled times. There are no clear winners in the film. Is Eric satisfied knowing that his father was murdered because of what he knew, giving up his promising career in psychiatry and sixty years of his life to find out that truth? The answer is bitterness.

What makes Wormwood a great one to watch over Morris' other recent projects is that his obsessiveness of finding the truth is matched by his subject here. It's not finding the truth in brilliant yet flawed sociopaths -- Robert McNamara in The Fog of War, Fred Leuchter in Mr. Death or Donald Rumsfeld in The Unknown Known. With the film, he is saying that there is a beauty in seeking the truth while sacrificing everything. That it is something to aspire to, especially in dark times.

Expansive in its scope, engrossing, structurally daring and thoroughly watchable, Wormwood is a true masterpiece in the age of rampant misinformation and distrust.

Wormwood, a Netflix original story told in six chapters, opens in select theaters and globally on Netflix on December 15.