In which two Netflix series seek to unsettle and undermine expectations.

In the 1970s, U.S. broadcast television networks were awash in weekly crime shows that wrapped up cases in less than an hour. Beginning with Hill Street Blues in 1981, that began to change to more serialized formats, as some cases carried over into multiple episodes; in 1993, NYPD Blue began crossing boundaries as far as the adult nature of content was concerned.

More than 20 years later, the television landscape has expanded dramatically and the increasing popularity of streaming services means that Netflix can spend billions of dollars on content annually on an often bewildering variety of films and episodic shows; it's now available in more than 190 countries worldwide.

What that means for genre fans is that an increasing amount of tantalizing fare is now available in a steadily increasing number of languages. For example, the German series Dark began streaming on the service recently; when I selected the first episode to watch, I was dismayed to realize it was playing in an English-dubbed version. Then I realized -- dope! -- that a few flicks on my remote control enabled me to enjoy the original German-language version with English subtitles.

And with that I sank into the first episode and was soon absorbed in a very odd tale about the inhabitants of a small town, dominated by a nuclear power plant that is soon to close down, and a missing teenage boy.

After a preliminary scene of self-inflicted violence, we are soon plunged into a naked sex scene, which is very disorienting, yet, as it turns out, entirely relevant, since that's the modus operandi for the series, presenting incidents that slowly accumulate into a dark portrait of characters who are broken and brittle. Some hold up better than others.

Some TV shows depend on their characters to maintain interest, while other shows are dependent on a compelling narrative. Dark features both intriguing characters as well as surprising plot twists and an overall narrative that, through four episodes, just gets stranger and stranger.

The first episode hooked me and the second confirmed that I wanted to watch more. I've enjoyed the first four of ten episodes so far and it's my top viewing priority for the next week. Unlike other shows, however, I've tried to resist watching more than one episode at a time. Dark feels deeper, more dramatic, and more deserving of a closer look, so I don't want to rush things. 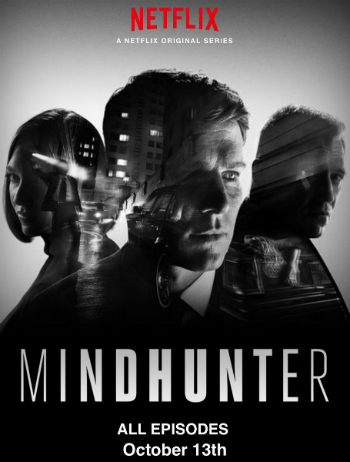 Mindhunter, also available on Netflix, is the more widely publicized of the two series, in large part because of David Fincher's creative participation. He directed the first two and final two episodes -- Asif Kapadia, Tobias Lindholm and Andrew Douglas each directed two episodes as well -- and his visual stamp is, delightfully, all over the place.

At times, it seems that an umbrella was placed over the sun to prevent sunlight from penetrating the gloom and doom that pervades the atmosphere. The series is drawn from Mindhunter: Inside the FBI's Elite Serial Crime Unit, first published in 1996, a book by John E. Douglas and Mark Olshaker that left a vivid impression on me when I first read it, more from the cases detailed than from the rather dry prose.

Because of that impression from nearly 20 years ago, I was not fully prepared for what Fincher and company had developed. Set in 1977, the series follows FBI special agent Holden Ford (Jonathan Groff) and his partner Bill Tench (Holt McCallany) as they began to develop the idea of profiling serial killers and start to apply that knowledge to help them solve other cases.

Ford's personal life is revealed through his growing relationship with Debbie Mitford (Hannah Gross), a postgraduate student who is fully his equal -- or more so -- intellectually and far better equipped emotionally to deal with some things that he is incapable of processing in "normal" human terms, which puts a strain on them.

Ford's occasionally testy relationship with Tench is also well-established; I especially enjoyed Tench's integrity to his own beliefs. He's willing to give a little, but not too much, which strikes me as genuine and refreshing. Psychology professor Wendy Carr (Anna Torv) also enters the picture, providing a contrasting perspective.

All in all, the 10 episodes are well-performed and beautifully-made episodes that are well worth the investment in time. The series has been renewed for a second season.

Again, please share comments on either of these series, or any other streaming show you've been watching, below.

Notes on Streaming calls attention to films or episodic shows that debut on various streaming services worldwide. The writer is based in the U.S.