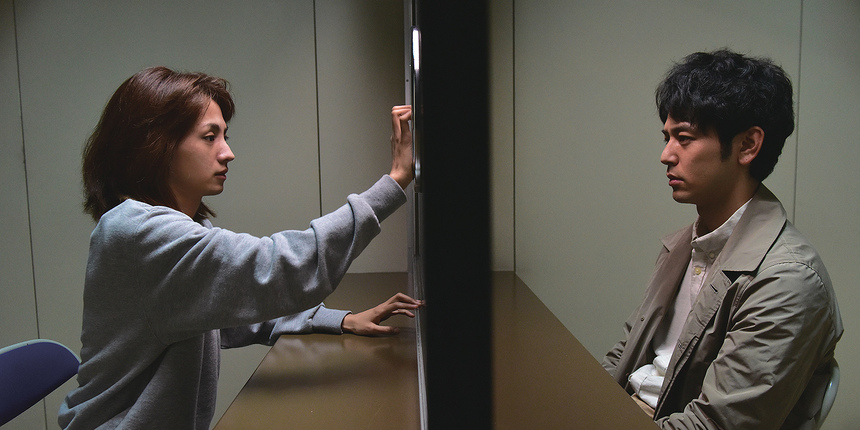 A self-assured and masterfully shot feature-length debut, the film nevertheless feels intrinsically indebted to the seminal works of Kurosawa Kiyoshi, Nakata Hideo, and Shimizu Takashi. Its subdued grey color palette, use of cold interior spaces, and emotionally distant authority figures haunt the film, all staples of the genre that serve to set the mood in a way that allows Gukoroku to fit into its world like a hand into an old, surprisingly not-yet-worn glove.

Satoshi Tsumabuki plays the withdrawn, stoic newspaper reporter Tanaka, who has dedicated himself to covering a year-old murder mystery: the slaughter of a seemingly perfect family of three (mother, father, daughter) killed in their home -- the perp never caught. He hurdles himself headlong into his investigation, it seems, to distract himself from his personal problems.

His younger sister, Mitsuko, has been imprisoned after facing child-endangerment charges; she either failed to feed, or withheld food from her toddler daughter to the point of severe, life-threatening malnutrition. Mitsuko, however, doesn't seem to comprehend that she's done anything wrong, nor does she understand the severity of her impending sentence.

In looking into the Tako murders, Tanaka begins by seeking out friends, coworkers, and classmates of the family. Through the anecdotes and memories of his subjects, he begins to see the Tako family -- specifically its patriarch and matriarch -- in a multitude of lights, many of them decidedly unflattering, thought not entirely surprising.

The picture of the Tako husband and wife painted by interviewees show them as selfish, catty, and cruel, a typical trope for attractive, rich young people. It's when the revelations start to hit a little too close to home that Tanaka begins to find himself lost in the mire.

Gorgeously filmed and expertly paced, Gurkoroku is an impressively confident first feature from director Ishikawa Kei. The story's revelations, while certainly disturbing, feel earned and believable, rather than cheap or shocking. Ishikawa employs some surreal visual metaphors sparingly, and plays around a little bit with the Rashomon style of shooting the same scenes from different perspectives, resulting in a mise-en-scène that functions as an effectively intriguing puzzle.

Ultimately, Gurkoroku: Traces of Sin is an incredibly intimate, micro-scaled story that simultaneously presents the narrative of a broken, impoverished family with a scathing commentary on the Japanese class system, implicitly indicting with each turn of its carefully constructed plot. And while the film is unmistakably Japanese, the themes of elitism, nepotism, sexism, and systemic oppression will be uncomfortably recognizable for viewers from any vantage point.

Do you feel this content is inappropriate or infringes upon your rights? Click here to report it, or see our DMCA policy.
2017crimegukorokuishikawa keijapanjapanesemysteryTokuro Nukuitraces of sinTsumabuki Satoshivancouverviff