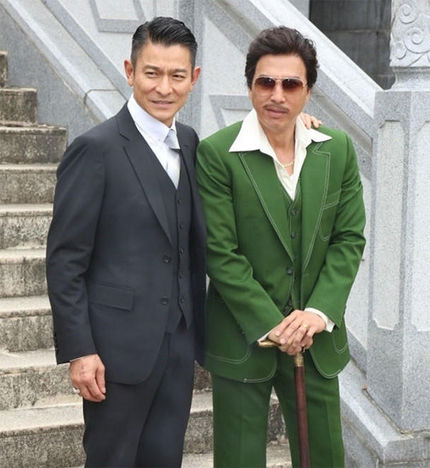 A change of pace for Yen, with the film being more of a crime drama than his usual martial arts actioners, although there is still enough bone crunching violence to keep fans happy.

Yen stars as Crippled Ho, an illegal immigrant from Mainland China who manages to work his way up the criminal ranks to become the number one drug lord in Hong Kong. He is assisted in his endeavours by corrupt cop Lee Rock (Andy Lau), with the two forming a close but tenuous bond.

Crippled Ho is  based on real life criminal Ng Sek-ho, who had been previously portrayed by Ray Lui in director Poon Man-kit’s excellent To Be Number One (1991). To Be Number One covers similar ground, although there are more than enough differences between the two films to make them worthwhile.

Ray Lui returned as Crippled Ho in the same year as To Be Number One, with the inferior Queen of Underworld (1991), where he played a supporting part alongside Category 3 starlet Amy Yip and the excellent Shing Fui-On.

The main difference of these earlier films is the inclusion of Andy Lau as Lee Rock, who was introduced almost 26 years ago in director Lawrence Ah Mon’s Lee Rock (1991). Both the Lee Rock films were produced by Chasing the Dragon’s Wong Jing.

Bringing both the Crippled Ho and Lee Rock characters together works quite well, as both To Be Number One and Lee Rock dealt with the rise of the drug trade and the formation of the ICAC (Independent Commission Against Corruption).

In addition, the earlier films share a number of the same cast members with Chasing the Dragon, with the likes of Kent Cheng, Ken Tsang and Chan Wai-man all making welcome appearances.

Chasing the Dragon is a more upmarket film from director Wong Jing, with the film having next to none of his usual wacky comedy stylings. Jing co-directs the film with regular director of photography Jason Kwan, here making his directorial debut.

It is unclear how much credit should go to each individual director, as Chasing the Dragon is quite different from usual Wong Jing fare. The overall professional look of the film is possibly more due to Kwan’s previous work as a DP, with him employing a variety of interesting shots and giving the film a real period feel.

The period detail is helped no end by the films excellent sets, most memorably the famous Kowloon walled city, where the majority of the film takes place.

As well as Jing and Kwan being credited as directors, the film also has Aman Cheng listed as assistant director, no doubt on board to make sure the production ran smoothly.

Cheng has worked regularly with Wong Jing throughout his career, mostly with Category 3 fare such as Raped by an Angel 2: The Uniform Fan (1998) and Sex and Zen 3 (1998). Before Chasing the Dragon he had most recently worked with Jing on From Vegas to Macau 2 (2015).

Both Yen and Lau are excellent in their leading roles. Fans of Yen’s more martial arts orientated roles may be disappointed, as the type of action involved here is more rough and ready, with any hand to hand action consisting of unrefined brawls and not the typical stylish moves Yen has become famous for.

The only real one on one fight Yen has in the movie is a brief scuffle with fellow martial artist Philip Ng, who cameos here. Even then the fight quickly develops into a free for all with Yen having to fight multiple opponents.

Yen however excels in the more dramatic parts of the film, with Ho being a likeable but flawed character, one who is loyal to his friends but ruthless at the same time. The film does try to show his hypocrisy, with him complaining of his brothers’ drug use even though he is the biggest drug supplier in Hong Kong,

Yen works well with Lau, who in the opening credits listed as a guest star but has as much screen time as Yen. His character however isn’t given as much of a back story, which could be due to the fact that it has been covered previously in the Lee Rock films.

Lee Rock is corrupt, but shown to be more loyal than his counterparts, mostly British officer Ernest Hunt (Bryan Larkin), who goes out of his way to prove his villainy. Like the earlier Lee Rock films, he additionally has to deal with his fellow corrupt officers and the emergence of the ICAC.

The supporting cast are mainly good, doing a lot with what are generally underwritten roles. Of them, veteran character actor Kent Cheng makes the best impression as Lau’s partner, with him being more than just a loyal sidekick.

As well as Cheng, the film has the always great Philip Keung as one of Ho’s gangster brothers, who does what he can with his supporting role. He was better utilised in his other Andy Lau films of the year, Herman Yau’s Shockwave (2017).

It’s not only the Hong Kong actors that manage to make an impression, with Scottish actor Bryan Larkin chewing the scenery and making for an imposing villain. He is unfortunately saddled with some poor dialogue, but manages to rise above it.

The main cast of Chasing the Dragon is mostly made up of men, with the majority of females only appearing briefly, with both Ho and Rock’s wife’s being forgotten about for the majority of the film. Only Xu Dong-dong gets a bit more to do as a mysterious drug dealer.

Not happy with just starring in the film, both Andy Lau and Donnie Yen are credited as producers on the film, along with Wong Jing and Connie Wong, a regular Jing collaborator. Yen clearly put a lot of effort into the film, and has went on record stating that this is his best film since Ip Man (2008).

Like a lot of Wong Jing productions, the main issues with the film are the script. Written by director Jing and Kwan, the story of Chasing the Dragon makes for compelling viewing, but still has some drawbacks which let it down slightly.

Ho’s personal life is overlooked for large parts of the film, only to later talk of his children, which the audience would be forgiven for not knowing he had. The timeframe of the story is also unclear, as the film begins in 1960, with the story quickly moving through the decade without the film telegraphing this.

Thankfully the performances, period detail and well choreographed action scenes make up for any drawbacks in the script department.

Unlike other recent Donnie Yen films, the actor does not direct the action scenes himself. The action this time is handled by ace choreographer Yuen Bun, Yan Hua and Yu Kan who also acts in the film.

The major standouts in the action department are the Lee Rock ambush, where a large gang of criminals try to kill Rock within the walled city and Ho has to fight to save him. The other is the bullet strewn finale, where Ho faces off against Ernest Hunt and his corrupt officers.

The three action choreographers are veterans of the Hong Kong film industry and all have worked with Donnie Yen on multiple occasions.

Bun had worked with him years back on both Once Upon a Time in China 2 (1992) and Dragon Inn (1993), with him working behind the scenes on the films action scenes. He most recently collaborated with Yen on the actions scenes for Kung Fu Jungle (2014).

As well as working with Yen, Bun has also worked with Andy Lau on multiple occasions, the most memorable of these being Benny Chan’s Moment of Romance (1990), The Island of Greed (1997) and Running on Karma (2003).

Yan Hua isn’t as prolific as Bun but has worked with Yen regularly since the last decade. He has assisted in choreographing the action to various Donnie Yen hits, including SPL (2005), Flash Point (2007) and Kung Fu Jungle, where he worked with Yuen Bun for the first time.

Chasing the Dragon marks the first time Yu Kang has been credited as a main action director. He has however assisted on Iceman 3D (2013), Special ID (2013) and Kung Fu Jungle.

He also had small acting roles in the likes of Wu Xia (2011) and more recently Ip Man 3 (2015). Hopefully this will lead to better things for him, for as well as his action choreography, he makes for a memorable on screen villain.