New York 2017 Review: In FELICITE, a Glimpse of a Modern Woman's Life in Kinshasa

Véro Tshanda Beya Mputu stars as a singer in Alain Gomis' film, which features much humanism, culture and joy. 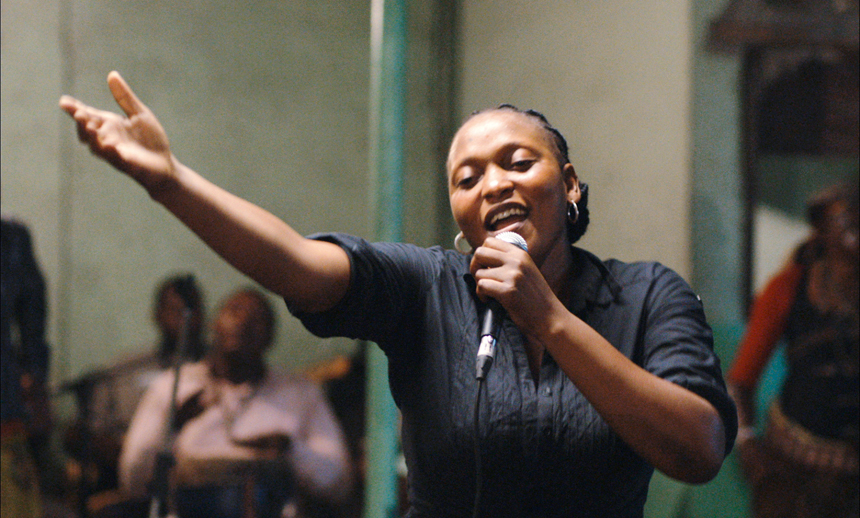 Senegalese-French director Alain Gomis' Félicité is a great patchwork of elements that are full of contradictions and contrasts. And it's beautiful, energetic and refreshing.

It's about a singer in an outdoor bar, also a single mom, played by enigmatic Véro Tshanda Beya Mputu, trying to survive day-to-day life in Kinsasha, Democratic Republic of Congo. Strong willed and free spirited, she is a modern woman who doesn't need a man by her side. But life throws curve balls at her when least expected and keeps her on her toes.

As with his previous films that took place in Dakar, Senegal, the sight and sound of bustling streets of Kinsasha becomes as much a character in the film as any individual.

The first half of the film plays out like a docu-drama by the Dardenne Brothers. Samo, the unresponsive teenage son of Félicité, ends up in a hospital with a broken leg after a motorcycle accident. Running against time, Félicité frantically runs across town to gather money for her son's operation by any means necessary. It means involving police to people who owe her money, swallowing her pride and asking her ex and family members for help and going door-to-door in a super rich neighborhood and begging for money, while making a scene.

In the latter part of the film, the tempo changes dramatically and things slow down significantly. And it concerns Félicité's on/off romance with Tabu (Papi Mpaka), a local drunkard and blowhard with a great heart. It's the budding formation of modern family in Kinshasa. Contrasting with the frenetic first half, the second half is full of laughter, hope and optimism.

Félicité is a melding of many conflicting elements. There is documentary-like naturalism (thanks to  the handheld cinematography of veteran DP Celine Bozon, sister of director Serge Bozon) mixed in with a recurring, beautiful dream sequence in the woods in near darkness. There is local music (featuring the Kasai Allstars) rubbing shoulders with the Kinshasa Symphonic Orchestra playing classical pieces by Arvo Pärt. Félicité's strong-willed, modern woman meets Tabu's womanizer and drunkard, accept each other and continue their amicable relationship.

It's the music that is at the heart of the film. Sung by earthy, smoky-voiced Muambuyi, the lead singer of the Kasai Allstars, Mputu's Félicité comes to life whenever she's on stage. The "Congotronics" is an infectious, eclectic music that represents many different ethnic groups that consist the region. Arvo Pärt's somber music fills in for somber moments but it fits surprisingly well in the film.

The running joke that takes up much of the screen time is Tabu's epic struggle with Félicité's dying fridge. It's an impetus for their budding romance and also provides glimpse of the earthly concerns of Kinsasha's everyday life, as Tabu scans the bustling outdoor market for spare parts: the dirt road, panhandlers, dancing traffic signal cop, pickpockets, and so forth. It's a dizzying display of what it's like living in such a place and also a testament to human resilience.

Mputu ‘s broad, beautiful face with her steely gaze is the bedrock of the film. Even when things get dire, the film never succumbs to cheap sentimentalism. Papi Mpaka’s naturalistic performance also helps the cause.

Félicité is not another downbeat film about Africa steeped in miserablist tendencies. Gomis and company don't lose the sight of happiness in the daily lives of its ordinary citizens. There is much humanism and culture and joy to be had in Félicité and I am grateful for it.

Do you feel this content is inappropriate or infringes upon your rights? Click here to report it, or see our DMCA policy.
Alain GomisFranceNew York 2017SenegalVéro Tshanda Beya Mputu