Hey Toronto. Just putting a bug in your ear about an important stopover in Grady Hendrix's tour of his latest book Paperbacks From Hell. Presented by our friends at The Mikatonic Institute of Horror Studies, Paperbacks From Hell Live is coming to our town next month on November 30th at The Royal Cinema.
Mr. Hendrix has graced Screen Anarchy with a small selection of book covers that he writes about in his tremendous overview of the horror novel explosion of the seventies and eighties. It is just a taste of the glory that awaits you in his live show.

The Miskatonic Institute of Horror Studies presents:
PAPERBACKS FROM HELL LIVE!
In the early Seventies, three books changed horror forever: ROSEMARY'S BABY, THE EXORCIST, and THE OTHER. The first horror novels to hit bestseller lists since 1940, they opened the floodgates for an avalanche of horror paperbacks to pour onto supermarket shelves throughout the Seventies and Eighties until SILENCE OF THE LAMBS slit the genre's throat in the early Nineties.
Writer Grady Hendrix, described by the Wall Street Journal as "a national treasure", delivers a mind-melting oral history of this now forgotten world of Nazi leprechauns, skeleton doctors, killer crabs, killer jellyfish, killer babies, pretty much killer everything. Prepare yourself for a tour of this long-lost universe of terror that lurked behind the lurid, foil-embossed, die-cut covers of...the Paperbacks from Hell!!!!

Tickets are on sale now here, and Screen Anarchy will be giving away two pairs of tickets mid way through November. Do not forget to read Kurt's review of Grady's book in our newly minted books on film series, ScreenPrint. I am nearly done reading my copy, mostly on my morning and evening commutes, leaving folks on public transit wondering who this weirdo is, with the wide smile on his face, sometimes laughing at a book called Paperbacks From Hell. 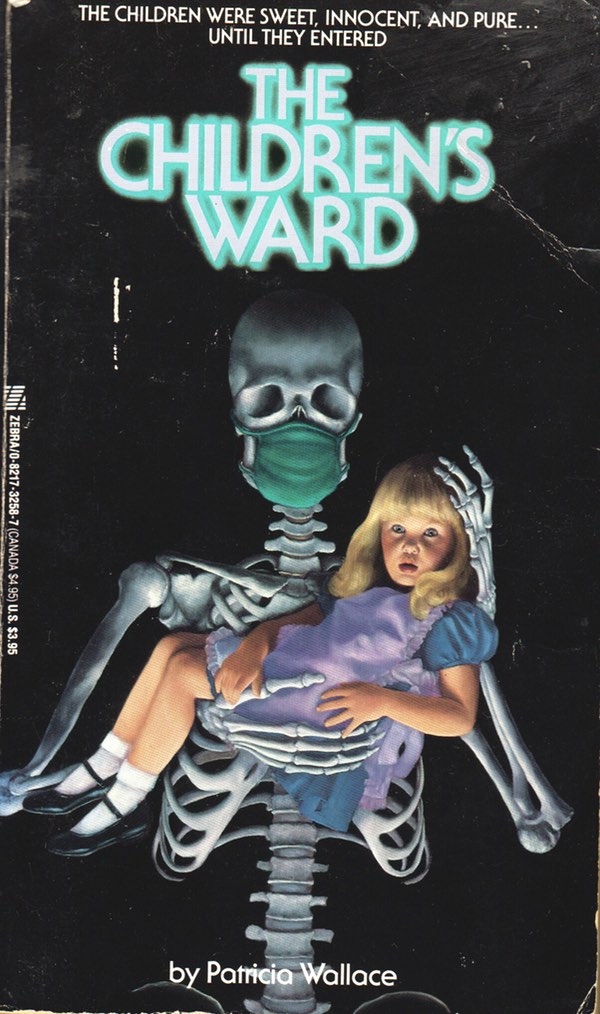 THE CHILDREN'S WARD - skeletons can do anything! Zebra was a bottom of the barrel paperback publisher and the contents of their books rarely had anything to do with their covers, mostly because that's where they spent their money. Zebra authors were often small-timers without a fanbase, while their cover artists were top of the line, as seen on the cover of this forgettable Patricia Wallace novel which is painted by Lisa Falkenstern, who did a lot of covers for V.C. Andrews and others over at classy, upscale Pocket Books. 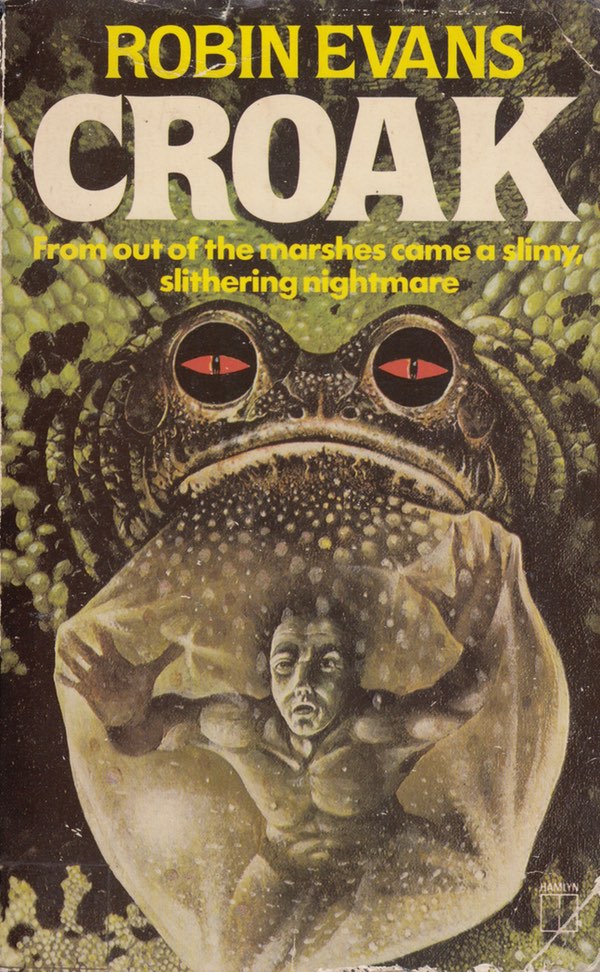 CROAK - everything that walked, crawled, swum, or flew attacked England with great gusto after Jaws and The Rats both hit it big in 1974. In this book, fertilized frog eggs get sucked up in a tornado and deposited in the water system, where they're drunk by people, then hatch in their stomachs. 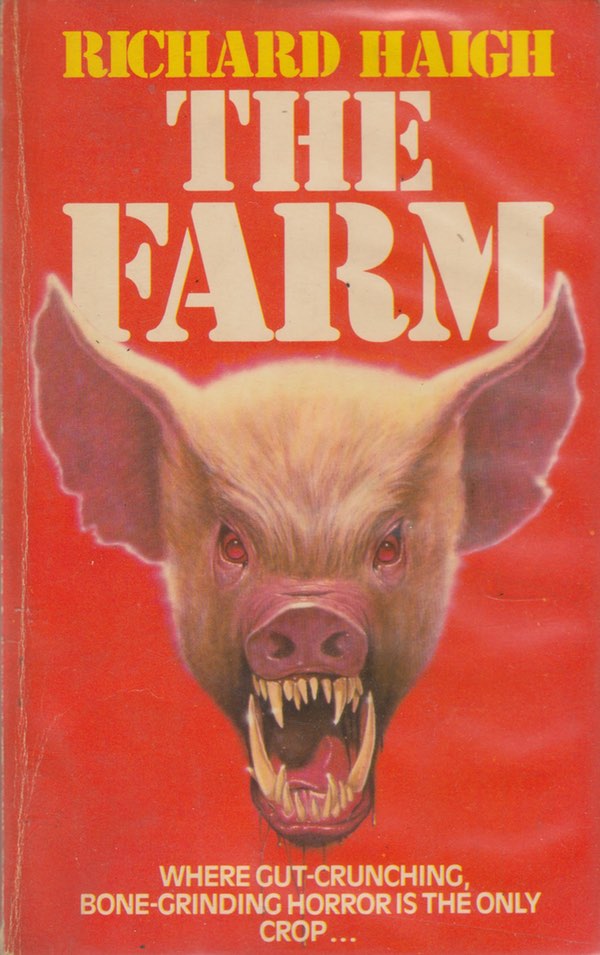 THE FARM - Les Edwards was the UK's great cover artists and he really pulled out all the stops for The Farm, about a whole barnyard full of animals hopped up on Special K (the club drug, not the breakfast cereal) and hungry for human flesh. Edwards' gory cover for sequel, The City, was cropped of all its objectionable elements before it hit bookstore shelves and is reproduced in Paperbacks from Hell for the first time. 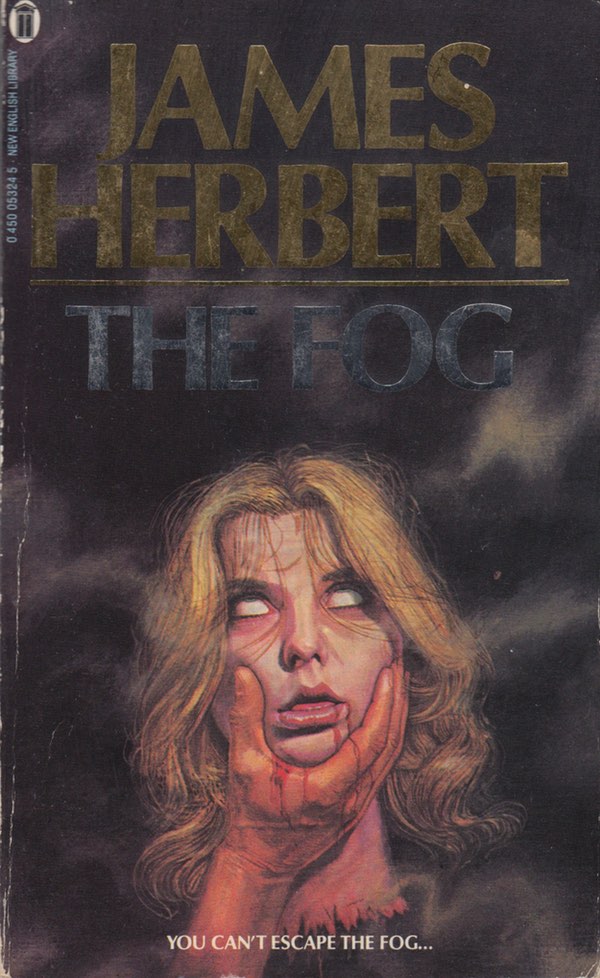 THE FOG - James Herbert's one-two punch of The Rats followed by The Fog in the early '70s was a blast of aggro anarchist energy, a pair of totally punk books about an England where gyms teachers got castrated by their students and rats ate babies alive. Mean, nasty, and nihilistic they made Herbert a household name and Britain's bestselling horror novelist. 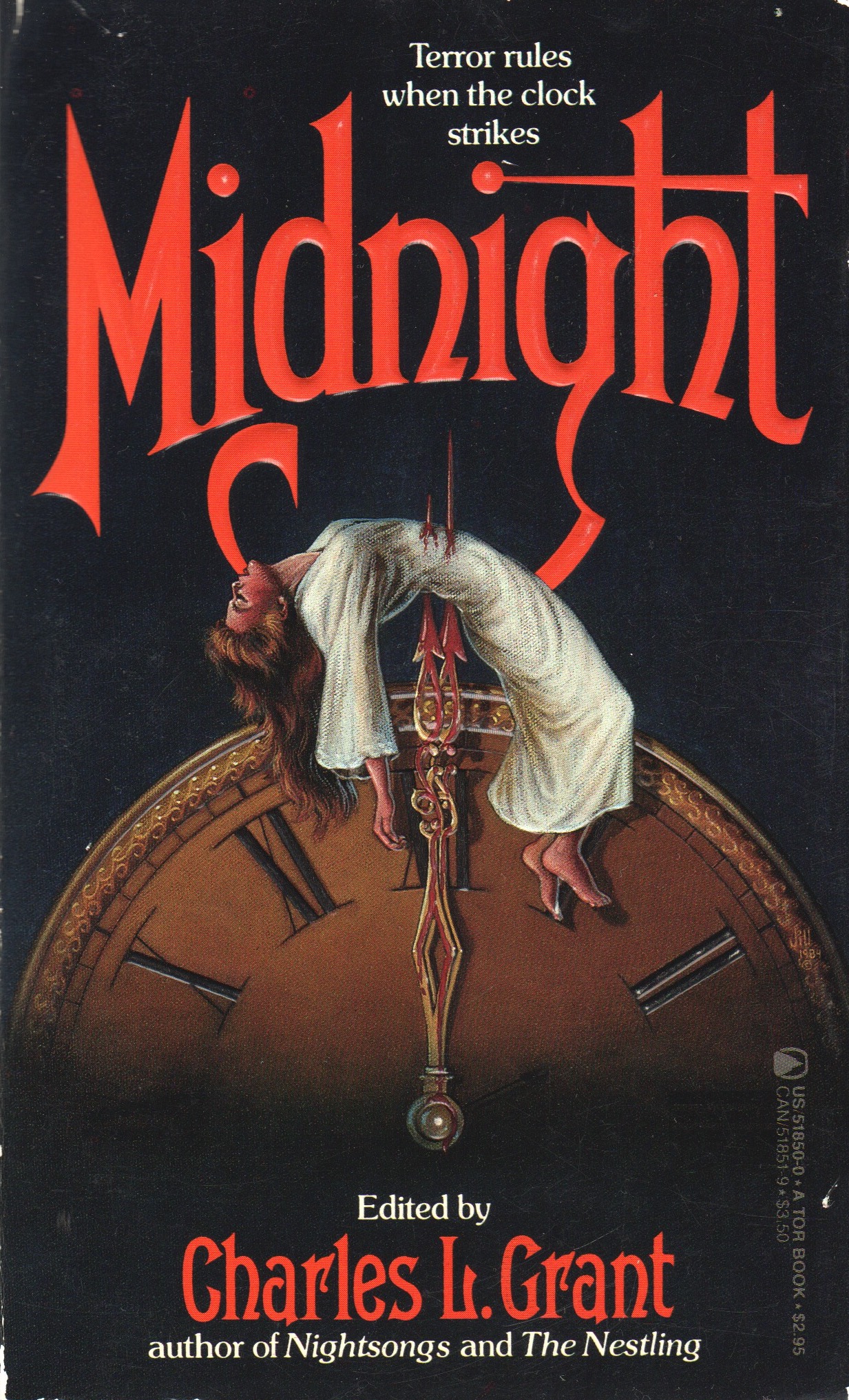 MIDNIGHT - artist Jill Bauman painted this cover to one of Charles L. Grant's anthologies of quiet horror stories using her daughter as the cover model. Bauman rarely painted mutilated human bodies, preferring to substitute broken and torn apart dolls instead. Her covers appear on books by Grant, Ramsey Campbell, and Harlan Ellison, amongst others. 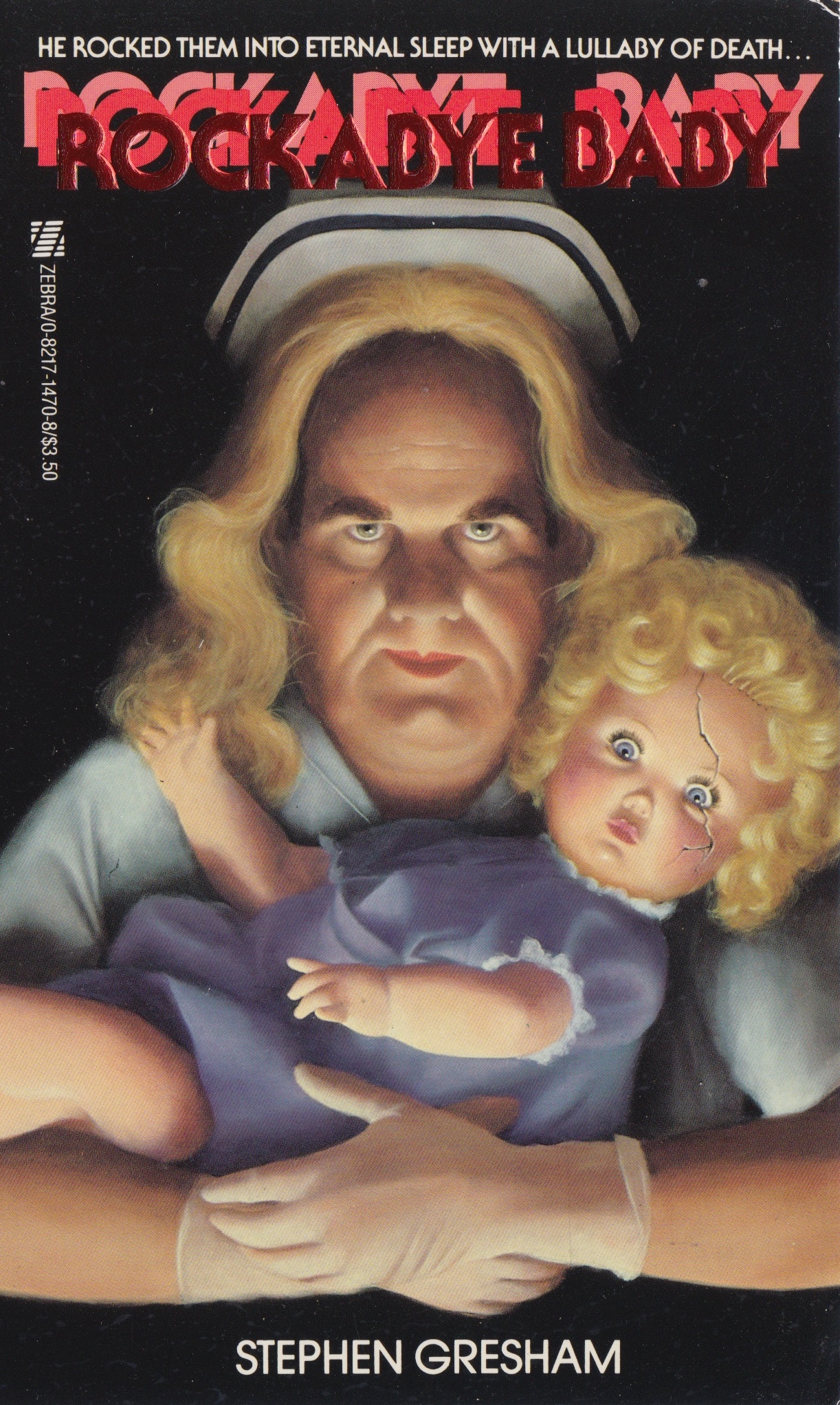 ROCKABYE BABY - another Falkenstern cover for another Zebra book, this time about a cross-dressing serial killer who glares at the reader, disconcertingly. 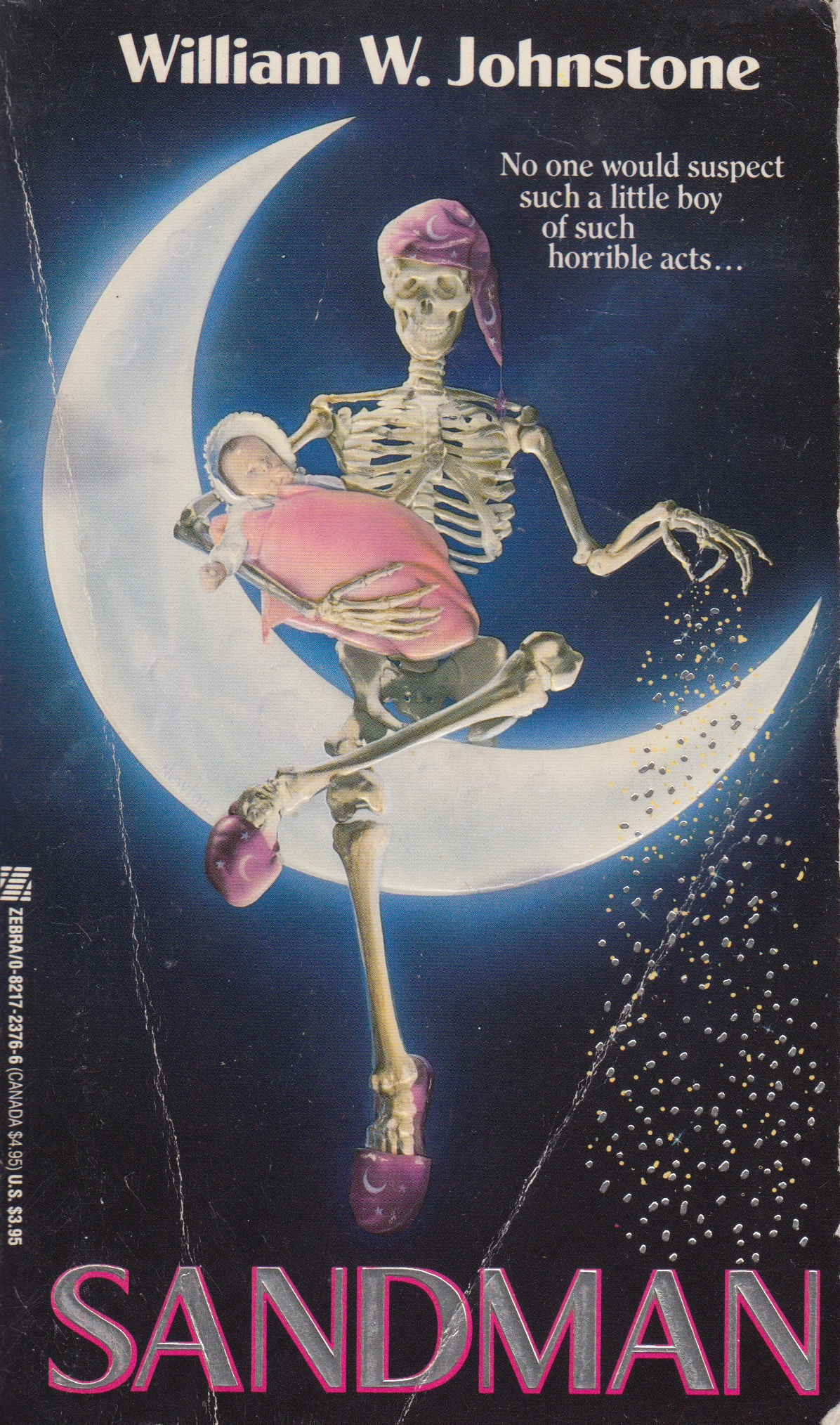 SANDMAN - Warning: no lunar skeletons appear anywhere in this book. But this Richard Newton cover is a thing of beauty. Newton painted so many skeletons that he actually wound up buying one from a medical supply warehouse, something that wasn't cheap in the '80s. But he wound up painting so many skeleton covers that it more than paid for itself. 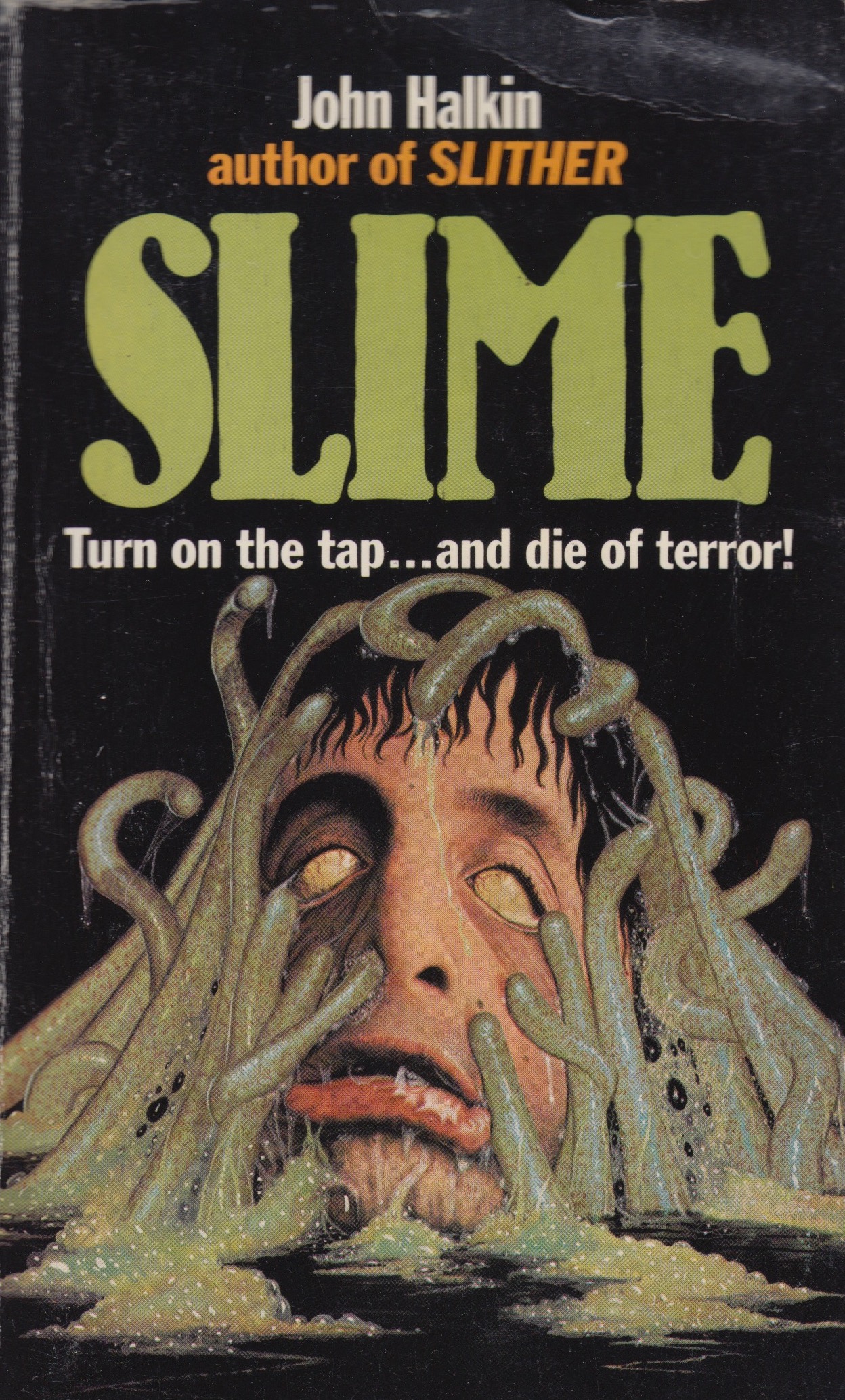 SLIME - Terry Oakes, the visionary madman of British illustration, turned in the cover art for this novel about an army of evil jellyfish taking humanity to the edge of extinction by drifting at them and then giving them annoying stings.

Do you feel this content is inappropriate or infringes upon your rights? Click here to report it, or see our DMCA policy.
Grady HendrixPaperbacks From HellThe Royal Cinema