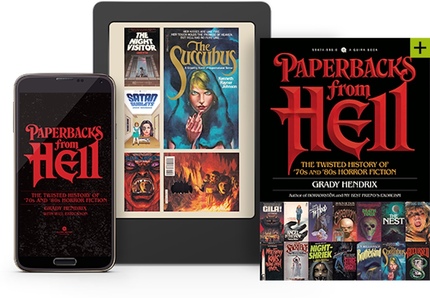 Welcome to our new feature, one that aims to looks at books, the original screen - not counting cave paintings and the Code of Hamurabi. We will typically be talking about books about movies in this space, but here for the inaugural edition of ScreenPrint, we thought we would talk about a book about books (of which, many were eventually were turned into movies.)

Let us talk about Quirk Books' Paperbacks From Hell.

During the 1970s and 1980s there was a tsunami of direct-to-paperback horror novels. The blockbuster success of Ira Levin's Rosemary's Baby and William Peter Blatty's The Exorcist, and shortly thereafter later Peter Benchly's Jaws (all of which were then turned into mega-successful movies) saw publishers whir up their printing presses, die cutters and foil embossers, and lower their standards for a two decade shotgun blast of pulp horror.

This is the subject of Grady Hendrix's survey of the delights, the silliness and the flat out entertaining lunacy of what went on between the pages of this era. Hendrix is no stranger to the genre, having written some successful horror-mash-ups in the past few years, including Horrorstör - about a haunted IKEA knock-off chain, that was park ghost-hunter, part Douglas Coupland wage-slave novel, and recently, My Best Friend's Exorcism, a 1980s set high-school possession tale that, to quote the Onion's A.V. Club is, "The Exorcist by way of Heathers."

Hendrix has a honed showmanship from the many years spent programming and introducing films for the New York Asian Film Festival. He brings his particular voice of giddy wit to Paperbacks From Hell, in the manner of a smart friend taking 'a really weird thing happened to me on the way to the bar,' anecdote to the level of highly observational performance art. Suffice it to say, the book has sense of humour in describing the plots and the tropes of these novels. It also spends a fair amount of time on the artists who did the paperback covers, the main way these books sold to a mass audience: pictures of skeletons, dolls, creatures with fangs (not the rock-star vampires of this era, but rather feral animals, sometimes even wielding weapons when the elongated fangs and pincers are not overkill enough), and little die-cut ovals where blonde haired, blue eyed girls were trapped in attics, gardens, and sure, why not gazebos as well.

Grady traces the origins of the boom to the late 1960s, and the publishing worlds fascination with the Satanism and the Occult. He establishes context for the massive success and popularity of blockbuster authors ranging from Stephen King to Clive Barker, Anne Rice and V.C. Andrews. But he saves his real puissance for what he views to be the de facto yeomen from the era: The true grinders like Graham Masterton, William W. Johnstone, Charles L. Grant, and Andrew Neiderman who were pumping out books every which way that favoured an anything goes, nothing sacred ethos.

For instance, Neiderman's Pin (also made into a film) and his story of ventriloquism, life-sized anatomical dummies, and incest, eventually led the publisher to get him to ghost write an insane 65 (!) V.C. Andrews books after she passed away from cancer 1986 after her tenth novel was in print. The publishers felt she was too successful to not continue putting out books with her name on the cover, and the content-pipe abhors a vacuum, and books with her name on it are still being published 30 years after her death.

Or take Hendrix's holy grail trashtacular, John Christopher's The Little People, which sees a castle turned into a bed and breakfast, but has Nazi Leprechauns living in the labyrinth of cellars below, and, to quote: "not just any Nazi Leprechauns. These are psychic Nazi leprechauns who enjoy S&M, as sex slaves for full-sized human men, and are actually stunted fetuses taken from Jewish concentration camps." Hendrix has a way of boiling down the pulp to what is the crux of the matter:  NOT THE BORING PARTS.

The book absolutely excels in its taxonomy of sub genres and sub-sub genres. It is, in fact, how Paperbacks From Hell is organized: Satan, Creepy Kids, When Animals Attack, Real Estate, Inhumanoids and so on, and like any science, offers a way to sort and understand what we are dealing with. It also follows the pop cultural trajectory from the Occult 60s to the Astrology 70s to the Satanic Panic 80s and the Serial Killer 90s, not coincidentally the subject that put a fork in the horror publishing world, and ate its liver with some fava beans and nice chianti. (Try not to be surprised, but that book was of course, also a major motion picture.)

Not afraid to kill his (demonic) babies on the altar for a good laugh, Hendrix nevertheless endeavours to point his readers in the direction in of the real gems, that transcend the form, and stand out amongst all the sex, satanism and splatter. Ken Greenhall's measured, reasonable tones, or Elizabeth Engstrom's point of view from her Monsters, or a sentence in Bari Wood's The Tribe, that features a viciously murdered man's final thoughts of a perfect afternoon canoeing with his wife. With Paperbacks From Hell, expect to form a sizable to-read list, and possibly become one of those lonely souls combing remainder bins in dusty used book stores or thrift shops.

But one gets the sense that if a book is ridiculous enough, according to Grady, it is worth a read. It was a crazy few decades with too much money, and not enough restraint. And the copious amounts of book covers scanned in and scattered liberally amongst the humourous prose confirm that Hendrix has as much fun with the tropes of the covers as he does with the tropes of the plots. This book is written with idiosyncratic love, backed by research and no shortage of talent with a phrase. Instead of going deep or scholarly, he knows this era of the genre well enough to keep lightly skimming across the wide and weird surface of the pond.