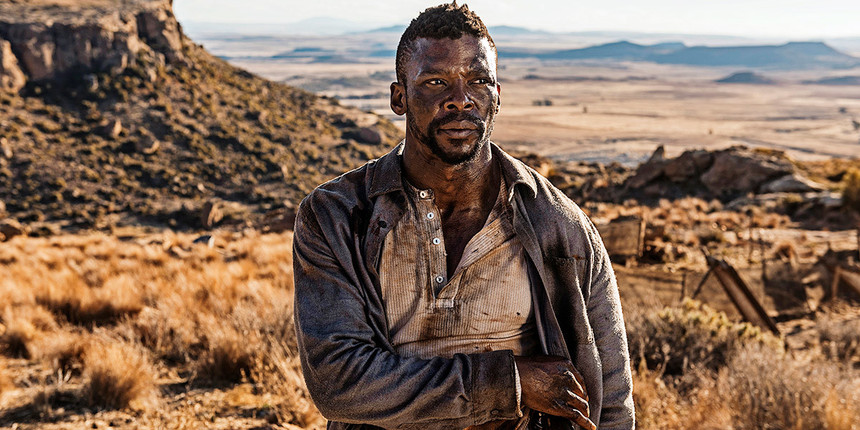 The western genre, long associated either with American film and the lone cowboy holding fast to independence in a changing landscape, or the spaghetti western, in which European directors examined more forcefully the often insidious nature of the more corrupt side of the cowboy/frontier life, is given fresh eyes in Five Fingers for Marseilles. While not lacking in gunfights or bar brawls, the film takes many of the western genre tropes and deepens them in a new national context, with deeper investigation into the politics of postcolonialism in rural South Africa.

We meet the 'five fingers' (or really six) as children, who live in the poor part of their already rundown town in the Eastern Cape of South Africa, at the end of a railway line, where the citizens are subject to a white rule that is as corrupt as it is seemingly undefiable. When one of the six, Lerato, is kidnapped by white army officers, the others give chase, leading to murder and the fleeing of Tau ('the Lion of Marseilles'). Years later, after years of robbing travelers on the road and a stint in prison, Tau returns to Marseilles, only to find old corruption replaced by new, and a town caught between corrupt police force and a ruthless gang, desperate for a new hero.

Director Michael Matthews and screenwriter Sean Drummond know the language of the western genre well enough to give it due place: wide angle shot of a beautiful, empty landscape, which speaks to both the wildness of this end of the line place, and the people who cling to it, even if the future seems less than hopeful for change. This is not a town at the beginning of a country’s history, but stuck in the middle, between the colonialism of apartheid, and the movement away from apartheid-style institutions, where the powerful who have taken over are just as corrupt as the ones before, once again leaving the poor with nowhere to turn.

These issues are not glossed over; indeed, they are at the heart of the story, and the film takes it time with the audience to weave its tale, in a distinctly African style of storytelling that allows space for characters to speak and for those words to be heard and understood.

The film begins almost as a boys' adventure story, with children playing at a war they understand all too well; but when that war turns real, the film switches gears. This is a place and time too fraught to allow children to be children for long. And so we meet the five still-living fingers again as adults, not too far from their child counterparts: Lerato, holding fast to her father and their small tavern business in which at least they have a haven and some control over their lives; Pockets, the rich kid, now mayor of the town, trying (he thinks) to make improvements; Cockroach, now hard and resentful after being tortured by police, and finding his own power as a corrupt police chief; and Unathi, now a preacher, trying in vain to work as peacemaker. And of course Tau, returning because he has nowhere else to go, not wanting to be the hero that he was as a child, but stepping in again when he sees that little (and perhaps too much) has changed.

This are fairly archetypal characters, to be sure, and there are great archetypal scenes, such as meeting the 'black hat' bad cowboy in the local tavern, trying to steal away the local prostitutes and throwing his weight around, especially with Tau, the Lion, the 'Ghost' 'white hat' cowboy who appears out of nowhere. But instead of rushing through to the beatings and guns, we’re allowed to feel the full weight of the situation and its deeper meaning, and see how the wild south will remain wild as long as institutions of corruption have yet to be dismantled.

The load of this work is carried by great troupe of actors, who also find and portray that deeper meaning; Vuyo Dabula as Tau is not just a reluctant hero, but a tired one, one who believes there is little he can do to make structural changes, even though he can at least get rid of those who commit the immediate harm. Zethu Dlomo as Lerato excels in a role that does not give her nearly enough to do (except at the end) except be the object of affection; but Dlomo infuses her role with incredible life. Indeed, as all the actors do as the adult 'fingers', even if they have succumbed to corruption, their stories are not simply black and white.

To the wonderful cinematography by Shaun Lee, is the amazing work of production designer Franz Lewis; again, certain iconography of the western are here (such as hats and guns), but marked by their South African geography of colourful capes and bandannas, a marked contrast to the dark red landscape.

And it is in this landscape that the film begins and ends, a standoff between friends/enemies, about which archetype will be the way forward. And even if someone survives, is there really a winner?Law enforcement, gangs, politicians, are all still caught in the grip of the post-apartheid era, in a town with few prospects at the end of the line.

While not completely without hope, Five Fingers for Marseillesdoes not attempt to gloss over the violence of the situation (not entirely fictitious), nor does steer clear or a harsh look at those people and institutions that turn a blind eye to these problems. Wrap this in the iconography of the western, and you get a distinctly South African syntax of how these images can be reinvigorated in a new form.

(Disclaimer: XYZ Films, which owns ScreenAnarchy, is representing the film for sales. This had no bearing on the content of the review.)

More about Five Fingers for Marseilles