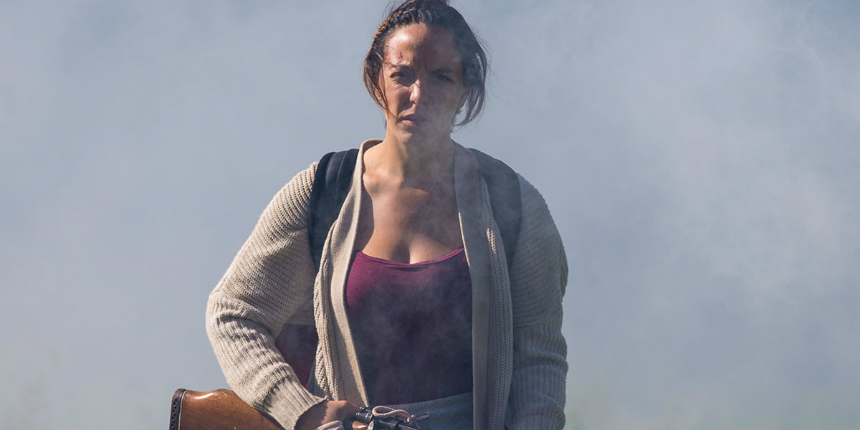 It's a cool, overcast day. A breeze is rippling gently through the air. An anonymous car pulls to a stop. The radio plays a pleasant French-language tune. Then a stranger lurches into view.

Beware a woman with a machete.

In a new clip from Les Affames (aka The Ravenous), even zombie killers appreciate a little music to accompany their job, and maybe soothe their nerves a little after splattering some dude's body parts to smithereens. The Canadian film, written and directed by Robin Aubert, will enjoy its world premiere at the Toronto International Film Festival tomorrow, and then will head to Fantastic Fest and the Sitges fest soon thereafter.

Enjoy the bloody, probably NSFW clip below. Oh, and here's a snippet of official verbiage:

A remote village in Quebec is terrorized by a flesh-eating plague, in the latest from Robin Aubert.

Aubert introduces his principals in a casual, almost cinema-verité style. They include a well-to-do woman; a young farm boy who has killed his parents; a strangely silent hipster (Monia Chokri) with a suspicious wound that just won't heal; and the presumptive hero, Bonin (Marc-André Grondin), who has acclimatized to the apocalypse very quickly and may be the only one with a belief in a future.

Les Affamés is punctuated by an offcolour, gallows humour, a steamy, hyperreal look, and moments of twitchy surrealism -- much of it propelled by the bizarre, often compulsive, behaviour of the zombies themselves, who seem to spend most of their time in a trance.