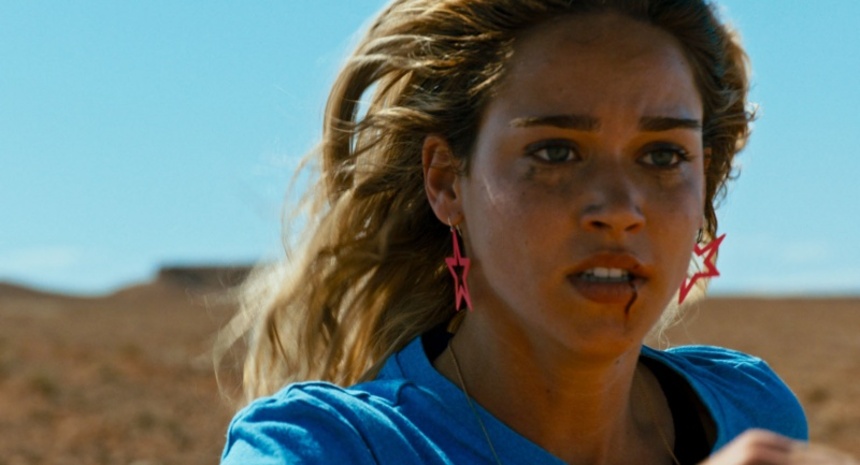 There is one inviolable rule of the rape-revenge genre: the revenge must be complete. Other than that, all bets are off. French director Coralie Fargeat takes this to heart in her feature debut, Revenge, and she does not disappoint her audience. Bloody, cruel, beautifully shot, with plenty of horrifying and gruesome moments, the film can proudly sit alongside other films of the subgenre.

I'll admit, I've always had a hard time with rape-revenge thrillers. Not in and of themselves, but because the culture behind them: a culture that teaches women not to get raped, rather than teaching men not to rape. Audiences enjoy the revenge that the survivors take, in conjunction with something of an attitude of 'well, there's nothing we can do about men, so let's have a woman be violent after the fact". Revenge gives us characters that play on stereotypes but asks us to look deeper, especially in the behaviour of women which is often considered worthy of blame when there should be none.

Jennifer (Matilda Anna Ingrid Lutz) is spending a couple of days with her married boyfriend Richard (Kevin Janssens) in his remote, luxurious cabin in the desert, accessible only by helicopter). Richard sees her as little more than his whore, and Jennifer seems willing enough to use the situation to her own advantage as well. Two friends of Patrick, Stan (Vincent Colombe) and Dimitri (Guillaume Bouchede) show up a day early for a hunting trip; it's pretty obvious why Jen is there, and she makes it clear to them and Patrick that she won't be submissive to his perceived control. She knows she is there as Patrick's mistress, but she won't be compliant to his every whim, and makes her bodily autonomy clear by dancing with Stan when Richard refuses.

The next day, Stan thinks that Jen is mistress for all, and although Jen makes it clear that she isn't interested, he rapes her, with Dimitri turning a blind eye to the crime. Richard attempts to just send Jen away, but she has no desire to be hidden, and threatens the tell his wife. An angry chase ensues, with the hunters leaving Jen (whom they all consider quite disposible) for dead in the hot desert sun.

But Jen survives the first attack, immediately showing she is far smarter than the men consider her to be, and what follows is the revenge. But not revenge for the sake of it (at least not at first), but survival. Jen doesn't have a vendetta or score to settle; but Fargeat sets the film in a place where Jen must kill the men if she is to survive and escape. Her instinct for survival is stronger than the pain inflicted, and she's a quick thinker: of course, a little peyote as a painkiller helps to clean up her injuries for the short term, even with hallucinatory side effects.

Fageat and cinematographer Robrecht Heyvaert give us bright, pastel colours against the brown desert, and don't shy away from presentng Jen in the opening scenes as the stereotypical sex kitten; but this is shown through a lens of how men want to view her and her presumed responsibility for their desire. This is then switched in the second half of the film, when Jen assumes the revenge role. As in Mad Max: Fury Road, the shots of Jen's body, even if only clad in a sports bra and underpants, are not sexualized. If the camera lingers, it is to show the injuries and how she keeps moving despite them.

To this is added terrific sound design to accompany the images of violent penetration, whether knives in eyes, stakes through a torso, or glass in feet, Fageat doesn't hold back on this imagery, or the violence of it to the human body and psyche. Indeed, the psychology of not only Jen, but her assailants is examined (rare for a rape-revenge film). This is not necessarily to evoke any sympathy for them, but rather to show their mental degredation as they realize how much they have underestimated Jen, and how their own tenuous grip on masculinity is so easily threatened.

At once a subversion of the subgenre and a fearless examination of how we view the behaviour of men and women, Revenge covers a large literal and proverbial thematic ground, all the while hitting the ground running on energy and tension, keeping the audience squirming on the edge of their seats.