Fantastic Fest 2017 Review: GENERATION B, Start the Revolution Without Me

Millennials fight back against the oppression of baby-boomers in a darkly entertaining and timely series from Belgium. 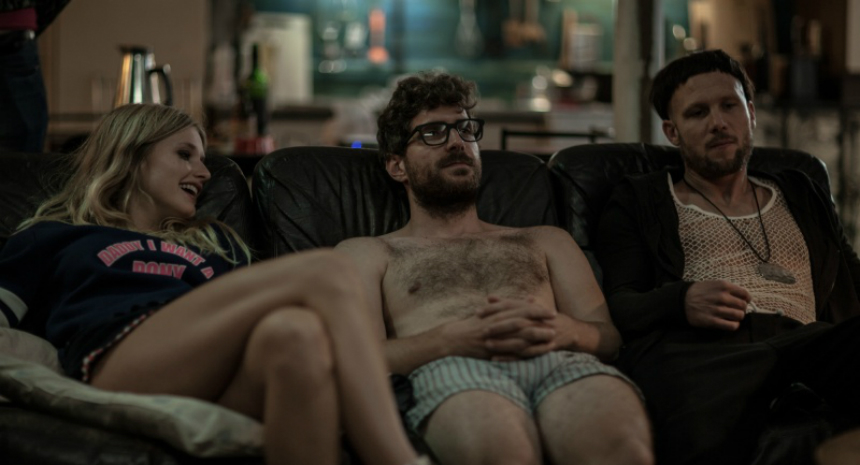 Everyone dances while the world goes to hell.

Although it doesn't spring forth as an immediately binge-worthy series, Generation B very quickly develops into a worthy, perhaps essential experience. Laced with absurdist comedy and cogent social commentary, it's also quite entertaining as a straightforward, observational series about the eternal conflict between generations.

Bluntly inspired by the recent economic crisis in Belgium, the series sets up a somewhat exaggerated world in which the baby-boomer generation is fed up with the millennial generation and starts blaming them for everything. The unemployment rate for young people has soared to 73%. Those under 30 are required to have a 'work willingness' certificate to qualify for a job.

A classic underachiever in his late 20s, Jonas (Jeroen Van der Ven) fails at an attempt to snag a certificate in Brussels as the series begins. For the past 10 years, he was sustained emotionally and financially by his girlfriend Brulletje (Eva Binon), but she threw him out three months before. When he's subsequently thrown out of his temporary housing due to nonpayment, he seeks to reconcile with her (again) and is again rejected; she can see that he hasn't "matured" as he claims.

Desperate for a job and a new place to live, and convinced against all logic that he can still win Brulletje back, Jonas follows up on a tip and snares a telemarketing job from Ibrahim (Zouzou Ben Chicka). The job is illegal and so is the living arrangement that Ibrahim offers, but Jonas has no other options and thus finds himself renting a couch in a flat shared by Lisa (Ella-June Henrard) and Sebastian (Jeroen Perceval).

Sebastian soon reveals himself to be a very intense fellow. Late that night, he tells Jonas that a war against the older generation is coming and he intends to play a key role; two women then show up dressed in revolutionary uniforms and disappear into Sebastian's room. While Jonas is still processing that, Lisa calls and asks for his help on a very, very odd job.

And that's not even all of the first episode!

The information dump slows down in the next couple of episodes to a more manageable level. Sebastian is revealed as the leader of the Generation Liberation Army, which steadily increases in size as the series progresses. Steely-eyed computer whiz Lilith (Efrat Galai) is introduced as a very determined, humorless lieutenant to Sebastian.

The revolution begins in the background, almost without notice by Jonas, who is consumed by his obsession with Brulletje. He says it's love; she repeatedly tells him it's over. As Jonas somehow fails upward at this telemarketing job, Brulletje aims to win a role on a television show, allowing herself to fall under the spell cast by magnetic actor Arend (Mungu Cornelis).

And what is up with Lisa? She works part-time as a presenter on a very weird TV show that appears to be aimed at kids, and part-time for Ibrahim at the telemarketing company. She ends up besotted with a married television executive with children, while drawing closer to Jonas.

For sure, many of these connections come out of nowhere, so it's good to keep in mind that the show is intended as a 'theater of the absurd' production. Truly, the most unexpected moments are usually laugh-out-loud funny, simply because they are so absurd and ridiculous, and they keep the show fascinating to watch even if the romantic and interpersonal connections sometimes fail to connect.

Pieter Van Hees directed two features (Left Bank and Waste Land) that screened at Fantastic Fest in the past. I've only seen the latter, which was based on his own script. I described as "a brooding police procedural ... that depends more on its pervasive ambience than plot twists." Obviously Generation B is a very different beast, and far more narratively oriented. Yet it features a similar, pervasive ambience, albeit in a broadly comic mode.

So from the very first moments, Brussels is presented as a city in decline, with shuttered office buildings, overgrown landscaping, and padlocked entrances to underground trains, as well as billboards, radio broadcasts and TV news shows that push out one-sided political messages in favor of the older generation and their bromides against the young. It would be easy enough to label it all "ridiculous and unbelievable," except that I live in a country where those kind of messages are dispensed by powerful people on a regular basis.

That's part of what makes Generation B so timely, and definitely relevant outside of Belgium. It's no good to just cluck tongues and say, 'What a silly show! That could never happen!' Well...

Putting all that aside, Jeroen Van der Ven and Eva Binon make for a convincing couple; their past history informs their present actions in ways that are entirely believable. Ella-June Henrard is terrific and so is Efrat Galai; both make very strong impressions in very different roles.

All six episodes of Generation B will screen at Fantastic Fest again on Tuesday, September 26 at 10:20 a.m.