Review: In ENGLAND IS MINE, Is It Really So Strange That This Charming Man Is Unloveable?

Mark Gill's film covers the life of Morrissey in the 1970s, before he led The Smiths. 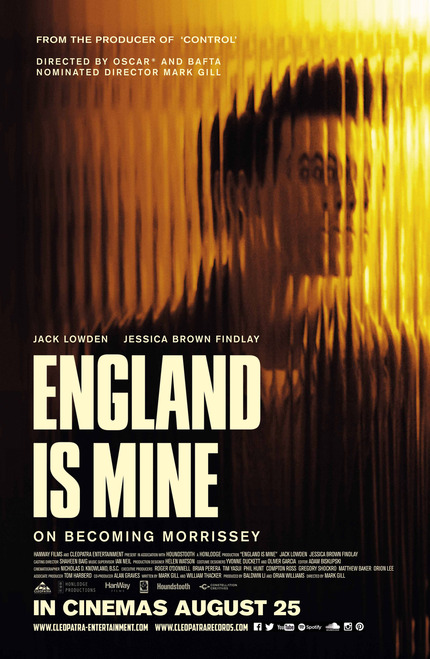 For over three decades Steven Patrick Morrissey has been one of the most controversial and enigmatic characters in pop culture. A singer-songwriter with an affinity for sarcasm and a vehement distaste for pretty much everything life has to offer, Moz inspires devotion and derision in equal measure.

Born of the same dour industrial wasteland from which post-punk legends Joy Division sprang in the late '70s, Morrissey's first proper band, The Smiths, became one of the most enduring acts of the '80s. Marrying their singer's dour, depressing, and misanthropic lyrics to the jangling pop guitars of the similarly iconic Johnny Marr, The Smiths were an act that remains hard to follow to this day.

So, when a Morrissey biopic was announced, my interest was of course, piqued. However, this was never going to be a home run because, as any fan or follower of Morrissey's career surely knows by now, Morrissey is an asshole.

He is a man whose music is a pure and distilled reflection of a deep seated personal dissatisfaction with humanity on the whole, a number of which he routinely declines to count himself. It turns out, if director Mark Gill's England Is Mine is to believed, that Moz was always a prick, and no matter how much I love his music, I don't want to watch him eat his cereal and piss all over happiness for 100 minutes.

England Is Mine begins with Morrissey, referred to throughout the film as Steven, talking shit about some local band or other in his local rag. Steven hates everything, you see, except for the New York Dolls and Oscar Wilde, a curious combination one might think, but Steven is a man of many mysteries, most of them utterly boring.

He spends the next several years of his life attempting to get some kind of creative effort off the ground following the genuine enthusiastic encouragement of a succession of female friends, only to see his early efforts fail miserably at which point he takes his frustrations on his well-wishers, leaving the Mozzer alone over and over again.

To say that England Is Mine is a film about Morrissey is grossly overstating the film's purpose. The protagonist is such a profoundly boring and uncharismatic character, as played by Jack Lowden, that it falls to these successive manic pixie dream girl archetypes to push him into doing really anything at all, and when his efforts fail - which they almost always do - they are cast aside. Young Moz sheds adoring women like a snake sheds its skin.

The only real and lasting relationship that young Moz is able to forge in the film is with a guitarist named Billy with whom he joins a band and gets his first taste of the on stage life. When Billy -- Duffy, for those interested, who would go on to become the guitarist for '80s rockers, The Cult -- is plucked from obscurity to play with a major label band, Moz is once again on his own. It's this perceived abandonment that sinks Moz, and the film, into an even more unbearable black hole of who-gives-a-shit nihilism from which it never really recovers.

At 94 minutes, there shouldn't be time for England Is Mine to get boring or feel like a chore, and yet it manages to accomplish that goal like a champ fairly early on. I would argue that the purpose of a biopic is to make the audience care about and understand its subject, but Gill's film doesn't seem to be much interested in either of those goals.

It's an uneventful navel-gazathon that only succeeds in making its subject even more unlikable than he already is. Sure, millions of people around the world live and die by the words of The Smiths, but even we understand that the man is a miserable git and prefer to see him through his lyrics.

Sadly, England Is Mine ends just as Morrissey's real contribution to the world is on the horizon, which is sad for everyone because I'm fairly certain that a film about The Smiths' early years is an infinitely more interesting concept than a film about some snot-nosed pissy teenager who reads too much.

I have a couple of major issues with England Is Mine that are more than a just a general disdain for the portrayal of its lead character. First of all, Morrissey's youth was spent in the industrial northern wastelands of Manchester, England, the city that spawned the above mentioned Joy Division alongside an entire exciting music scene right around the time The Smiths were forming, and yet none of that is in evidence here. It's a mystery.

There have been two recent musical biopics about the exact same scene, Michael Winterbottom's exuberant celebration of early punk 24 Hour Party People, and Anton Corbijn's black and white Control, the study of the tragic life of Ian Curtis, the singer of Joy Division. These films are wildly different in tone, and yet both manage to capture, if nothing else, a similar excitement about the possibilities of the future. Their protagonists handle this potential is different ways, but there's a sense that something bigger is to come.

In England Is Mine, there is not the slightest hint that success or excitement awaits Steven around the next corner. In fact, if you don't know the story or the characters well to begin with, it's quite unclear what the hell this movie is about.

A couple of the central characters are never given full names. For example, the guitarist BIlly is never given a surname; the audience is expected to know that he is Mr. Duffy, who would later conquer airwaves around the world alongside Ian Astbury with songs like "She Sells Sanctuary" and "Fire Woman."

Even more shockingly, the man without whom Morrissey would've remained a sullen teen forever, is introduced only as an afterthought. Yes, Johnny Marr, The Smiths' guitarist and the man equally responsible for the band's success is in England Is Mine, but he, too, lacks a surname. I know it is him because I'm a Smiths obsessive, but if you're coming to this story without that prior knowledge, the climax of the film makes no sense at all.

Perhaps it is a cultural disconnect. England Is Mine is an British movie made by British talent and largely marketed toward an British audience who would be more generally knowledgable about the rise and fall of Morrissey and The Smiths, but that's no excuse for completely refusing to put your real historical lead characters in any kind of context.

What Gill does is essentially give his audience a "nudge-nudge-wink-wink, see what I did there" version of a story that had the potential to be interesting, but by leaving out the punchline, he neuters the whole affair. What we are left with is an hour and a half of a whiny teenager with no ambition, no work ethic, and one hell of a chip on his shoulder. You know what, I've been there once on my own and it was no fun at all, I'm not interested in watching someone else do it, not even Moz.

Do you feel this content is inappropriate or infringes upon your rights? Click here to report it, or see our DMCA policy.
Jack LowdenJessica Brown FindlayJodie ComerMark GillMorisseyPeter McDonald

More about England Is Mine