Review: BUSHWICK Takes a Provocative and Often Chilling Look Into the Abyss

Dave Bautista and Brittany Snow star in a tale of tenacity set against a growing fascism. 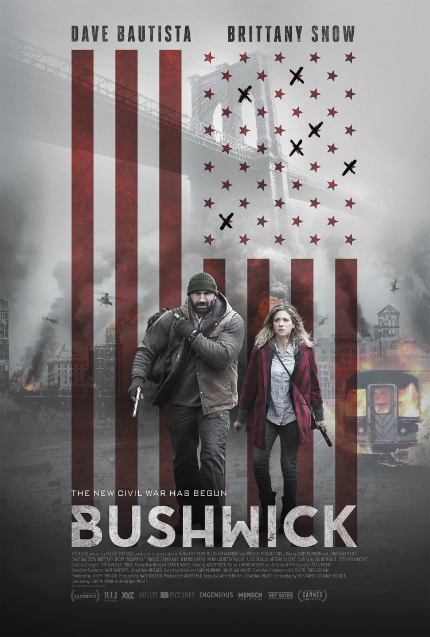 Ever since I saw Cooties in 2014 and fought with our founding editor in order to review the film (I lost out, of course) I’ve been anxious to see how Cary Murnion and Jonathan Milott would follow up on their delightfully offbeat take on genre cinema. And over the last few years, said founding editor and the partners in his production company helped Milott and Murnion shepherd a high-concept apocalypse piece set in one of the sections of Brooklyn.

Bushwick begins with a couple walking in a subway station -- I believe locals call them “trains”, but  that’s just one of the faults of New York life -- and having a pleasant enough conversation about nothing in particular. The first sense something interesting is happening is when you notice the cool, gliding camera, keeping up with the chat as they walk through an abandoned station.

Suddenly, a man in flame runs down the stairs, and -- as the continuous shot continues -- the woman loses her partner and we carry on for many more minutes, swinging through what seems to be complete anarchy. The streets of Bushwick are awash with men in special forces gear, while locals drive by with submachine guns shooting people in the head. It’s complete chaos, and the disconnect between the quaint, quirky architecture of this enclave and the sight of paramilitary invasion is the core of the film’s aesthetic.

As said woman, Lucy (Brittany Snow), stumbles into a basement for shelter, she’s confronted by the frontline of most apocalypses: a couple of rapey douchebags. Soon they’re dispatched by a local giant, Stupe (Dave Bautista), who reluctantly joins up with Lucy to find higher ground.

The technical ambition of the film shouldn’t be underestimated, as these directors are using the type of longshot most recently popularized by the likes of Oscar winning directors Alfonso Cuarón and Alejandro Iñárritu to make the tale of Bushwick even more immersive and effective. Yet unlike the recent Viktoria, a fine film that sometimes faltered as the conceit got in the way of the storytelling, Milott and Murnion are wise to include some overt cuts to emphasise certain transitions or hammer down a specific point. In other words, they never let their technique take the place of the primacy of storytelling, and it’s to their immense credit that the film feels like it’s much, much more than a simple, showy example of gliding camera work.

That said, the camerawork is often pretty extraordinary, and Milott and Murnion find ways of having the audience deeply engage with the material. Brittany Snow is compelling as Lucy, but it’s Dave Bautista who is stretching his tough-man persona farther than it has before. A sensitive, powerful performance that’s emotionally rich, the film relies far more on his emotional state than his physical one, making the impact of what transpires much more effective.

Between the floating camera and the collision between the chaos and normalcy of borough life, the film’s unsettling nature is captivating. Look to any urban warzone, from Sarajevo of the 90s to Aleppo of today, and it’s the divide between the civilized normalcy of modern urban infrastructure defiled by the machinations of war. To see masked  men rampaging through the streets, indiscriminately murdering locals, is appalling, and the film's broad political message is a particularly chilling one.

There’s a real sense of dread about the piece, as well as an insistence to  make sure that there’s no false catharsis for the audience. As such, the film may not play particularly well for some used to the trappings of genre at the expense of authenticity of narrative. Yes, the film is bleak and unflinching, but that’s part of what makes it effective. Strip away the explosions and the bombast and you have an indie genre project aiming  for Children of Men more than Escape from New York, and if it doesn’t quite reach those heights, it’s nonetheless a project to be applauded.

Bushwick provides an interesting, effective take on the idea of urban invasion, providing a particularly bleak glimpse into an apocalyptic struggle even more chilling given recent political developments. A tale of tenacity set against a growing fascism that’s poisoning much of contemporary life, the film is both a fascinating exercise in style as well as a provocative and often chilling look into the abyss. Plus, loads of dead hipsters on screen for those into that sort of thing.

Review originally published during the Sundance Film Festival in January 2017. The film opens in select U.S. theaters and On Demand platforms on Friday, August 25.

Do you feel this content is inappropriate or infringes upon your rights? Click here to report it, or see our DMCA policy.
Brittany SnowCary MurnionDave BautistaJonathan MilottUS