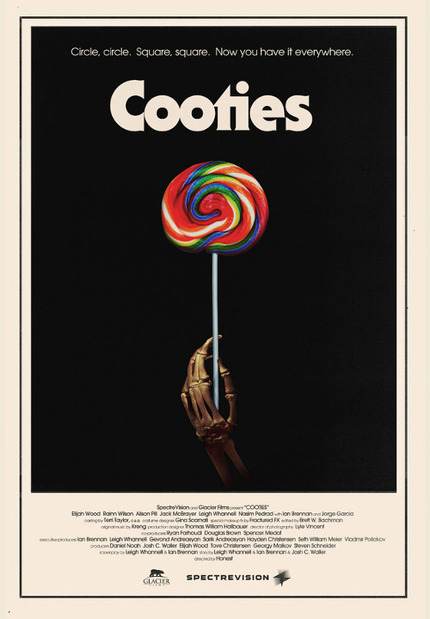 What happens when the creator of Saw and Insidious teams up with the creator of Glee? Cooties happens, a gleefully bloody crowd pleaser of a horror-comedy weighted more towards the comedy end of the spectrum blessed with a sterling cast and a host of ravenous schoolchildren in need of putting down.

Elijah Wood stars as Clint, an aspiring writer recently returned home to the small town of Fort Chicken where he is once again living with his mother while taking on a job as a supply teacher to pay the bills. Nope, the writing thing isn't going so well for Clint, as he struggles to make his way towards a workable manuscript for his first novel - a possessed boat story titled Keel Them All. Or All Hands On Death, whichever the eventual publisher prefers.

It's not a great situation for Clint, not by a long shot, but there is at least a small upside in the fact that he'll be working alongside his secret high school crush Lucy (Alison Pill) who teaches in the room next to his at Fort Chicken Elementary.  She's already got a boyfriend, though - the redneck gym teacher Wade (a hilarious performance from Rainn Wilson) - so maybe that's not actually so great either. And the other teachers? Not likely to form much of a social circle with the bizarre science teacher Doug (played by co-writer Leigh Whannell) the ultra conservative Rebekkah (Nasim Pedrad) or flamboyantly metrosexual drama teacher Tracy (Jack McBrayer).

Okay, strike what I said about there being an upside. This is going to be unmitigated hell for Clint, no matter how much of a smile he puts on it, and the hell gets a whole lot hellier when a piece of contaminated chicken spreads a virus through the young population of the school - a virus that affects only those who have not yet passed through puberty - transforming the student body into a pack of flesh eating horrors.

Directed with great style by the duo of Cary Murnion and Jonathan Milot, Cooties delivers a compelling blend of humor and blood neatly shifting gears between big laughs and legitimate tension punctuated by some impressive gore effects. Don't let Whannell's history affect your expectations too much as this is very different ground for him, with the script bearing at least as much of Glee creator Ian Brennan's stamp fused with the comic Whannell responsible for the ghost hunters in Insidious far more than the grim Whannell resposible for the torture of Saw. Meaning think 'fun' rather than 'extreme'.

Murnion and Milot keep things trucking at a remarkable pace, their camera finding clever little grace notes and visual gags throughout while keeping the plot moving along, balancing out their impressive ensemble cast and shifting gears between horror and comedy seemingly without effort. Helping to a very large degree is the absolutely stellar script from Brennan and Whannell and a hugely talented cast who are clearly having a blast working with one another.

Wood is an engaging everyman as Clint, his role playing out as a sort of friendly geek just edging up to cynicism as he realizes life hasn't worked out the was he wanted and likely never will. Pill provides an excellent foil and object of Clint's affection, the pair of them playing social awkwardness for charm. As the third point of the love triangle Rainn Wilson's Wade is the sort of character who would have been a raw caricature in the wrong hands but while certainly played larger than life by Wilson, Wade also has just enough soul for you to care. McBrayer is his usual self - very definitely a positive, why would you want him to be anything else - but the real revelation amongst the cast is Whannell. Should he ever decide he wants a break from the whole writing thing Whannell could have a great life as a comic actor, literally stealing every scene that his Doug features in with a series of hysterically inappropriate lines delivered with absolutely flawless deadpan timing.

Already picked up for US distribution by Lionsgate with rumors of a large scale release planned, Cooties has the potential for breakout success. The concept sells itself, the cast are having a blast, it's executed with style, and the genre elements are strong enough to provide a quality shock or two along the way without being alienating to a mainstream audience. Though the content is very different the tone is not wildly far away from films like Tremors or Gremlins, the sorts of party films that teens used to watch en masse crowded around the VCR. Picture either of the above fused with Community and you're in the right space. Hopefully audiences won't need to wait too long for the release.