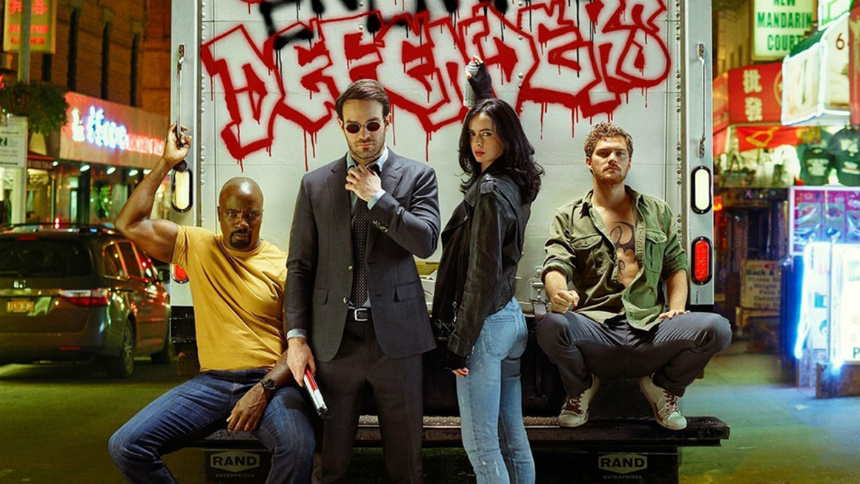 With its cinematic universe well established, Marvel looked to television to expand its screen presence. First came Marvel's Agents of S.H.I.E.L.D. on the ABC broadcast network in 2013. Later that year, we heard about their ambitious plan for four interconnected series on Netflix that would culminate in a team-up series, The Defenders.

It was easy enough to assume that Marvel was following its pattern of introducing superheroes in individual film installments, leading to its grand teamup, The Avengers. First out of the gate on Netflix, Daredevil successfully launched, thanks in no small part to the casting of Charlie Cox as the titular character. He spoke quietly, almost in a hush. The series featured a superb adversary in Vincent D'Onofrio and strong supporting performances by Rosario Dawson and Scott Glenn. The dark tone and PG-13 profanity helped distinguish it from broadcast television.

Jessica Jones followed, benefiting from showrunner Melissa Rosenberg's touch; it felt refreshingly different from Daredevil, in that it put a woman's perspective in the forefront. And not just any woman, but a woman who is still suffering from post-traumatic stress disorder and is wary of ... everyone. Krysten Ritter's superb performance brought the character vividly to life, ably supported by Rachael Taylor and Mike Colter as Luke Cage, a very quiet man with extraordinary abilities.

A second season of Daredevil arrived early in 2016, featuring the introduction of Frank Castle, aka The Punisher (Jon Bernthal) and Elektra (Elodie Yung). The season did not reach the heights of the initial season, and stumbled a bit in its middle episodes -- a common challenge for 13-episode Netflix series -- but proved to be above average in sum.

Luke Cage revolved around the character's adventures in Harlem. Defiantly different because of its setting and thematic focus, Mahershala Ali and Alfre Woodard carried the heavy dramatic weight with aplomb. It looked different, style-wise, and sounded different, thanks to its musical score, than either Daredevil or Jessica Jones. Moved front and center, Colter fell a bit short of what Cox and Ritter had done, performance-wise, and the series, under the direction of showrunner Cheo Hodari Coker, buckled somewhat during its middle episodes, yet again turned out to be a slightly above average endeavor.

As to Iron Fist: I confess that the negative critical opinions -- such as Matt Brown's takedown, published right here, prompted me to drop it off my priority list. Just before The Defenders became available to stream this past Friday, I wavered about whether it was "fair" to watch it before trying out Iron Fist.

Within 15 minutes of the first episode of The Defenders, I knew I had saved myself 13 hours of agony, because those first 15 minutes are devoted to Danny Rand, and they are terrible. Nothing in those first 15 minutes made me want to watch any more -- poor Finn Jones is in way over his head as an actor and screen presence -- but then the story pivoted and I decided to keep watching.

For an eight-episode series that is intended to be the culmination of four previous series, an awful amount of time is spent re-introducing the characters. The first two episodes play spin-the-bottle in rudimentary fashion, spending time with each of the main characters. They don't really all come together in one place until near the end of the third episode.

They're still working out the kinks of working together in the fourth episode, and the fifth, and the sixth ... Pity the supporting characters, who are shoved further into the background because there's simply no time to develop them further, except to talk and talk and talk about their frustrations. (Yeah, talk to me about disappointment in characters you like; I know what you mean.)

Apparently, Iron Fist is meant to be the fulcrum of the series. He has, potentially, the greatest superpower among the titular "defenders," and, though it's rarely mentioned, the greatest financial resources. Yet the actor is overmatched by literally everyone else on screen at any time, so their continued deference to the character feels ludicrous.

Really, though, that points back to a creative failure. If the producers were committed to the actor, why not adjust the script and story to reflect better his talents? Then again, maybe the producers' hands were tied by Marvel's requirements about their comic book characters.

What it adds up to is ... not much. Sigourney Weaver is wonderfully villainous, but even her evil is muted because the series, under the direction of showrunner Marco Ramirez, elects to place other villains on the same level as her. But they are not nearly as threatening, so the balance is off.

Perhaps that's a more accurate description for The Defenders: it's off. It's less a team than a collection of characters who share the same space, both for good and for evil.

Notes on Streaming is an occasional feature on movies and episodic shows that debut on streaming services.

Do you feel this content is inappropriate or infringes upon your rights? Click here to report it, or see our DMCA policy.
Charlie CoxFinn JonesKrysten RitterMarvelMike ColterNetflixSigourney Weaver

More about The Defenders