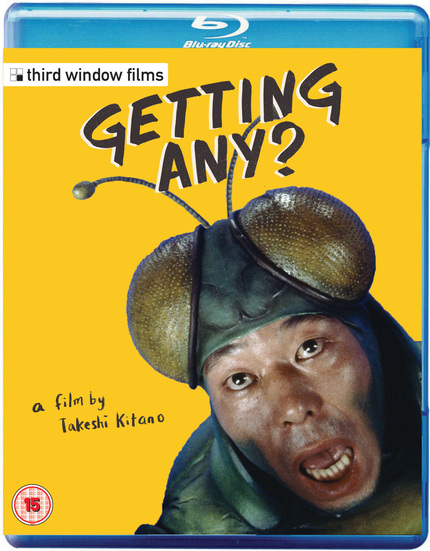 Third Window Films continues fighting the good fight of expanding the availability of world cinema on Blu-ray with their continued commitment to sharing the catalog of one of Japan's most famous filmmakers, the legendary Kitano Takeshi. After releasing much of his earliest directorial work in the UK, they now present the worldwide debut release of his crazy sex comedy, Getting Any?

Here's the synopsis for those unfamiliar with the film:

From the acclaimed director Takeshi Kitano [Fireworks, Kikujiro] comes a bizarre, over the top and absurd comedy full of slapstick silliness and never ending gags. A great satire of Japanese society and popular cinema, Getting Any?, embraces the spirit of Kitano s early stand-up and television work and as such it offers a genuine inside look into his true personality.
The story follows the nerdy middle age Asao, a professional daydreamer, whose one and only goal in life is - as the title suggests - to get laid. Asao embarks on a series of slapstick adventures in search of fulfilling his ultimate fantasy - making wild passionate sex with a woman. His holy quest for sex lands Asao in a series of absurd situations, involving robbery schemes, big movie productions, yakuza gang rivalry wars and scientific experiments.
The first printing of the Blu-ray will come with a brand new slipcover, like all of Third Window's previous Kitano releases. The Blu-ray will be sourced from a new 2K transfer from Office Kitano, and special features include an audio commentary from author Sean Redmond and an archival interview with Kitano from the initial DVD release.
Tweet Post Submit