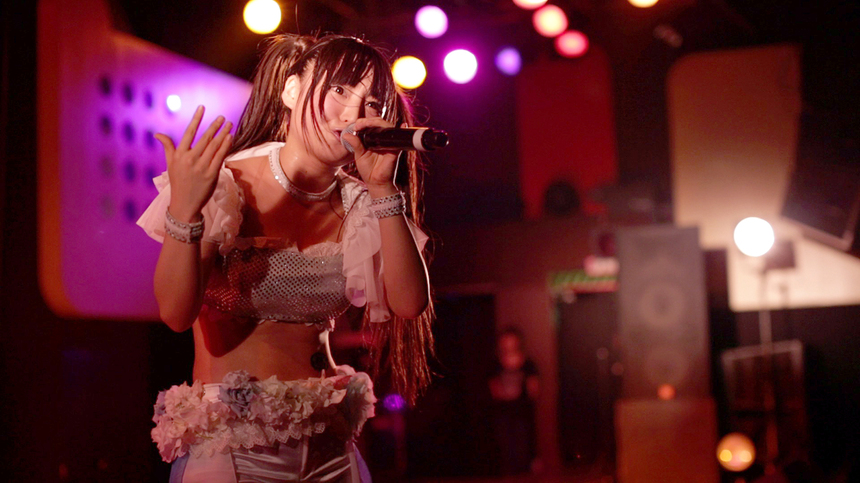 Teenage girl or young women solo music acts or bands (or boys, for that matter) exist in most countries in the world; some only famous in their own nation (such as the dozens of J-pop and K-pop bands), and others worldwide (Spice Girls, Backstreet Boys). Japanese filmmaker Miyake Kyoko's documentary Tokyo Idols examines one such sector of pop music: the young women who are the namesake of the film, whose particular brand of pop, and their age and the image they project, are the object of obsession for mainly middle-aged men in Japan.

Following one particular singer, Rio, and her legion of fans (and their leader and her most devoted fan, Koji), Miyake takes a keen eye to the pros and cons of the music, its creators and its fans. There are particulars to Japanese cultures, but these kinds of obsessions of not unheard of in other countries. But in the end, it is probably more disturbing than uplifting, given the expectations of fans and the ambitions of the girls/women.

Rio is what might be seen as typical of a 20-year-old in the modern world: she not only performs her music, but has a youtube channel on which she practices her dance moves and gives make-up lessons, thereby opening her more intimate world to her fans. This is par for the course for Idols, but it does give an allowed invasion of privacy that might account for fans' obsession.

The girls/young women in these bands are usually in their late teens (21 is considered to be 'too old'); there are around 10,000, often dressing in schoolgirl outfits or anything that makes them look 'cute' and young. For some of the academics interviewed, this translates to non-threatening, without power, able to be controlled, in a culture in which virginity and purity are worshipped, and there is a fear of girls becoming strong women (again, this is not isolated to Japan).

And while there are a few female fans seen in one or two shots, their admirerers are mainly men in middle and late middle age. They refer to their love of these idols as a 'religion', and their worship ranges from creating signs to attending every show to even following their preferred idol as they go on tour (quite literally, Koji and a few others following Rio as she cycles from city to city). For some their worship replaces any real romantic relationship, as for them, their idol fills a void.

And certainly, while we've likely all seen footage of young girls screaming for bands such as Backstreet Boys or The Beatles, the worship of these young women (and in some cases, pre-pubescent Idol groups) by older men is more than a little frightening, given the patriarchal power structure of the culture and society.

The director herself is absent from the text, instead using interviews with idols, fans, and academics give information, alongside footage of concerts, meet-and-greets, and perspectives on the daily lives of those involved. Miyake covers the bases well, offering both idols and fans a chance to speak of their lives and attachments, as well as those who offer a more studied and perhaps negative perspective.

Tokyp Idols does not attempt any clear conclusions; it merely presents us with the story, and allows us to draw our own ideas. But it is indicative that the film end on Rio turning 21, and therefore not being an idol anymore (and her fans looking to find the next one). Whether this is good for her or now is up to you to decide.

Do you feel this content is inappropriate or infringes upon your rights? Click here to report it, or see our DMCA policy.
Fantasia 2017Miyake KyokoTokyo Idols

> But in the end, it is probably more disturbing than uplifting

I completely disagree. Is like making a documentary about The Beatles and the british pop... and trying to "sell" us that it's bad because of people like Charles Mason or Mark David Chapman.

This "doc" is biased.

It's impossible to hear about this stuff and not immediately think of the interrnational success of Babymetal. One of the main reasons for their success in the West has to be that those girls are NOT sexualised, like so much of Idol culture is.

That whole world is just too icky for most Westerners to comprehend. I remember a TV show where Kelly Osbourne spent a few weeks in Japan and participated in various cultural activities, such as a cosplay convention and working at a maid cafe, and she made the observation that in Japan they have a knack of taking the most innocent of things and making them creepy and perverted.