Edinburgh 2017 Review: Love and Paganism In THE DARK MILE 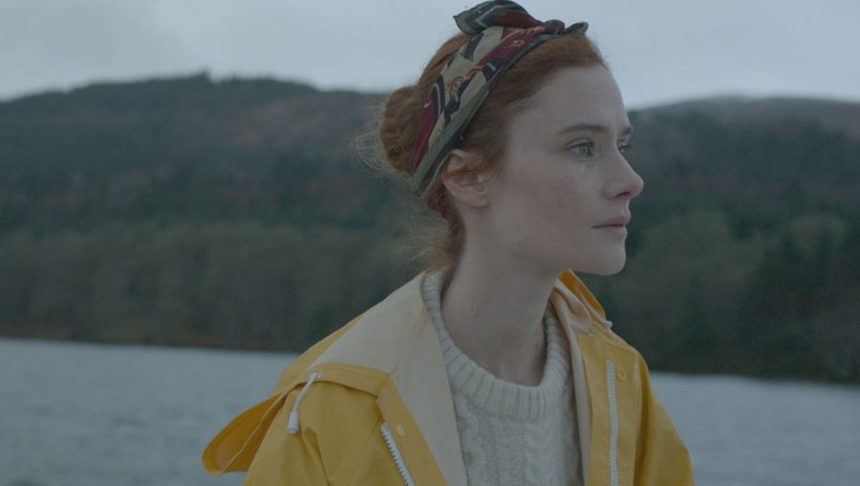 Louise (Rebecca Calder), decked out in a heavy fisherman’s sweater and yellow raincoat, is ready to escape from the stress of city life and the recent sting of a failed attempt at IVF for a boating break in the Scottish Highlands.

Her partner Claire (Deirdre Mullins), much less appropriately dressed and unable to tear herself away from her laptop and phone, seems less committed to the trip. Once on the water, the stunning scenery and palpable sense of isolation promises the women a chance for intimacy and the opportunity to rebuild their damaged relationship. Unfortunately, the local inhabitants of the isolated waterways might just have other plans for them…

In The Dark Mile, director Gary Love focuses his attention on the complicated relationship between his leads, and the problems of work, fertility and infidelity that are driving a wedge between them, while slowly building upon the mounting external threats that they should be giving more attention.

A trip to the pub (The Slaughtered Lamb?) serves as an introduction to their boating neighbours, with the deathly silence and cold stares that result on their arrival broken only by the threatening swagger of a mouthy young man who appears to hold some sway over the odd collection of drinkers. The unsettling music, pagan statues and antlers encountered in the pub are symbols that will be witnessed time and again on this trip, hinting at a greater menace lurking beneath the area’s already unsettling exterior as the tension mounts until the film’s final reveal.

Aided by the ancient and bleakly beautiful environment it’s set in, the film does a fine job in creating atmosphere. Cramped and claustrophobic interiors offer no room to hide, while external shots give a sense of dangerous isolation and all the while, the director’s voyeuristic camera lurks in windows and woods. The occult symbols that crop up, repeated in disorientating, dream-like montage, are used to add a sinister undercurrent to the more pressing threat from a hulking black barge which appears to be stalking Louise and Claire’s dinky ship.

One of the most interesting aspects of the film is the central couple themselves. Their relationship might have been used to stir tension amongst the old-world locals yet, despite Claire’s best efforts; it’s nice to see that for the most part it doesn’t elicit much of a response.

Far more jarring for Louise, the locals, and the audience is Claire’s obsession with finding wifi and an inability to leave work behind. This and Louise’s acceptance of the ancient world she now finds herself in results in more friction between the pair than anything the locals can provide.

Tense set pieces involving this sinister ship add momentum to the plot, as does the increasingly erratic behavior of Louise, in a fine performance from Rebecca Calder that lurches from fragile and hurting to strong and determined and back again.

With its Scottish setting and pagan symbolism, comparisons to The Wicker Man are inevitable, yet where that earlier film succeeds by ultimately bringing the full scope of its horrors into the light, The Dark Mile fails to deliver on its mysteries, resulting in an unsatisfying finale. After the slow-burn build-up, the ending feels rushed, giving way at the last minute to horror cliché and failing to give satisfying explanation to the ideas built up throughout.

The Dark Mile’s occult tinged psychological horror utilises strong performances and a stunning Highland setting to good effect, even if a lackluster finale means it doesn’t quite deliver on its atmospheric build-up.

KNUCKLEDUST Trailer: Throwing Everything Into The Action Thriller Genre