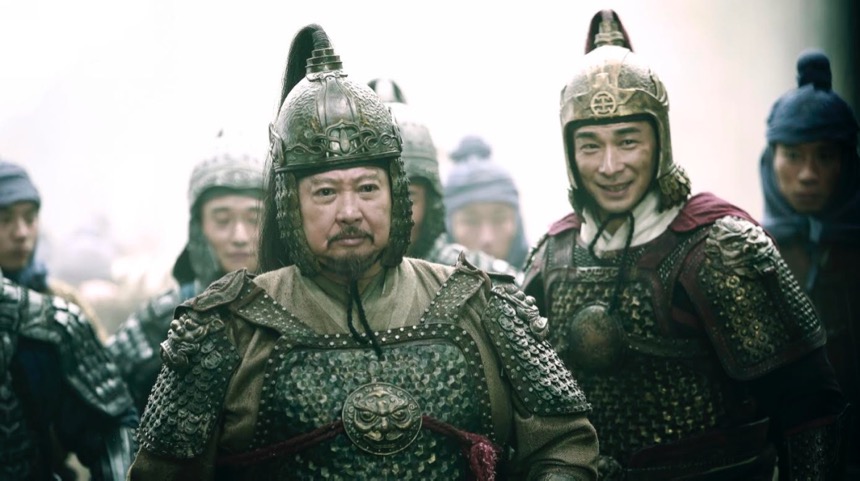 Vincent Zhao stars as the eponymous military tactician in Gordon Chan’s sweeping action epic, following the efforts of the Ming army to keep a fleet of fearsome Japanese pirates at bay in 16th century China. Sammo Hung, Wan Qian and Yasuaki Kurata also star in this uneven, yet respectful tale of strategy and courage.
As the East coast of China is repeatedly plundered by marauding pirates from Japan, Ming army Commander Yu Dayou (Sammo Hung) turns to renowned tactician General Qi Jiguang (Vincent Zhao) for help and guidance. Qi believes he would be of more use away from the front, training the army in newly devised techniques, but he is persuaded into fulfilling those orders on the road, leading a modest force in a series of carefully planned counter attacks. However, Qi faces adversity at every turn, not least from corrupt provincial bureaucrats and reluctant villagers.
On the other side, the Japanese force are experiencing their own problems. The pirate army consists of both honourable samurai, beholden to rituals and traditions that get in the way as often as they assist their struggle, and rampaging ronin, raping and pillaging their way through the Chinese countryside in the most shameless fashion. While they outnumber the Ming army by 20 to 1, the pirates’ lack of organisation may yet prove their downfall.
An experienced action director best known for his early collaborations with Stephen Chow like Fight Back to School and King of Beggars, as well as Michael Wong classics The Final Option and Beast Cops, Gordon Chan has been preoccupied in recent years directing the misguided fantasy action series The Four. God of War grounds the director back in reality, and although the film is sluggish in its first half, the second half delivers top drawer action once things eventually pick up.
Leading the Japanese pirates, veteran performer Yasuaki Kurata strikes a noble and imposing figure, instilling an element of honour and class in what would have otherwise been a rag tag group of savages. As Kumasawa he provides leadership and guidance, particularly to his younger, hot-headed protégé Yamagawa (Keisuke Koide), while his climactic stand-off against General Qi proves the film’s finest moment.
Vincent Zhao, much like Donnie Yen in his pre-Ip Man years, has always been a versatile and capable action star, yet has struggled to break out. After inheriting the role of Wong Fei Hung from Jet Li, Zhao starred in Once Upon a Time in China parts IV and V, before playing the lead in Tsui Hark’s The Blade. Since the dawn of the new millennium, however, Zhao has only been seen on the big screen fleetingly (most notably in Yuen Woo Ping’s True Legend), plying his trade for the most part on Chinese television.
God of War gifts the actor a solid leading role as General Qi, a man of intelligence and great leadership, without becoming an insufferable egotist. Introducing his forces to a wide array of new weaponry, including three-eyed hand canons mounted upon long bamboo poles, as well as vicious, multi-bladed spears disguised as tree branches, Qi quickly wins over the hearts and minds of soldiers and villagers alike. There’s no denying that Zhao bears an uncanny resemblance to Andy Lau from certain angles, who played a similar role in Jacob Cheung’s A Battle of Wits, but hopefully God of War will generate more work for the actor on the big screen, where he most definitely deserves to be.
Sadly, viewers hoping for two hours of Sammo Hung goodness (the actor gets second billing after all) are left sorely disappointed. Hung’s turn as Commander Yu is little more than a cameo granting the performer precious little screen-time. In his stead, however, eldest son Timmy Hung has a far meatier role, and proves one of the film’s more memorable supporting characters, as an initially skeptical villager who takes up arms against the pirates.
Regina Wan Quan, as Madame Qi, is sadly short-changed in what is a fascinating, if under-utilised character. Qi’s wife is revealed to be a more than competent fighter herself, not just able-bodied, but also possessing at least a modicum of her husband’s tactical know-how. Qi leaves her to defend their hometown of Weihe while he takes the army off to Taizhou, and she does a damn good job of it, disproving her naysayers as well as vanquishing her share of the pirates. However, Chan treats her role in the events very much as a side-note, when - assuming her story is historically accurate - she may have made a more interesting central protagonist.
When it finally gets going, God of War delivers everything one could hope for from a period epic of this sort, but the film certainly takers its time getting there. For a good hour, Chan struggles to maintain much interest in his characters, as they bumble from one minor skirmish to another, hoping to second guess each other’s next move. However, once the Japanese mount their grand offensive, God of War morphs into a beautifully staged, elegantly choreographed procession of hack and slash action that only lets up when the last enemy falls.
3
Sign-In to Vote
Tweet 0 Submit

Do you feel this content is inappropriate or infringes upon your rights? Click here to report it, or see our DMCA policy.
ChinaGod of WarGordon ChanHong KongJapanSammo HungVincent ZhaoYasuaki Kurata

More about God of War

Definitely want to see this!

No you don't. rogerebert com gave one star out of five.

Additionally, I don't understand why this movie is named God Of War, 荡寇风云 means "Cleansing of Thieves Like Wind"

Certainly the characters featured in this movies are not considered God of War in China, the only person to ever have been considered as a God Of War in China is Guan Yu.

Actually I felt the Japanese were portrayed quite fairly in GoW (relative to other recent Chinese films), with plenty of time given to humanising them and exploring their motives.
I read Simon's review over at Ebert. I admire him very much as both a writer and person, but must say I disagreed with the degree of frustration he had with the film. But then, if we all had the same opinion, what an incredibly tedious world we would live in.