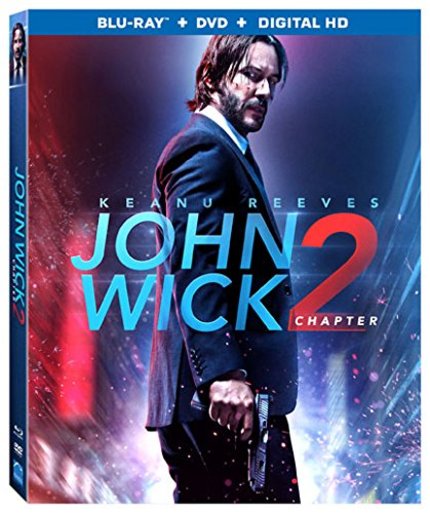 Keanu Reeves continues his adventures as the apex predator in John Wick: Chapter 2, now on Blu-ray from Lionsgate Home Entertainment. Peter Martin reviewed the film upon it's cinema release earlier this year and wasn't 100% convinced that the film was necessarily a step of from its predecessor:

The original was a marvel of construction and execution, which makes topping it a daunting task. Instead of devising something entirely new, therefore, the decision was made to ... make the same movie all over again!

The action is (again) so over the top that it quickly gains escape velocity from reality. The ludicrous plot holes and superhuman tolerance for bodily violence are more about the rhythms of the punches and gun blasts and knife thrusts and less about logic and the natural laws of the universe in which everyone else lives.

In John Wick: Chapter 2, there will be blood, oh, so much blood, gushing and spraying and collecting in pools on the ground, as bodies fall, one after the other and the other, an accumulation of corpses that should offend, except that none of it is real and all of it is outrageously entertaining for devoted fans of action movies.

I have to agree with him, I saw a lot of gushing over this film and how it ramps up the action (it does) and craziness (it does) of the first film, but I didn't think it was necessarily a step up. The two films feel like they come from different universes; the first from a relatively grounded reality and the second from a world bursting at the seams with assassins and pigeon kings. It's a fun film, to be sure, but it went off the deep end for me very early on. However, I recognize that I am in the minority and if you're willing to suspend your disbelief for a couple of hours, dig in and find out for yourself.

One place I cannot fault this release is in the crazy amount of bonus material that Lionsgate have included, which does definitely add to my appreciation of the film. There is the almost obligatory actor/director commentary, which is informative, however, it's the rest of the material that will keep fans busy for hours. We get separate featurettes on teh legacy of the success of the first John Wick film, a featurette on the pre-visualization of the action sequences by the amazing stunt crew, and exploration of the crazy new underworld of the Wick-iverse, some great material regarding the insane car stunts the film has to offer, and an extended look at Keanu Reeves' training for the film. Regardless of my opinion of the outcome, I have to respect the amount of work that went into the film, and this disc certainly makes me appreciate Reeves' dedication.

Last but not least is the popular online short Dog Wick, which reimagines the first film if the dog had lived and John WIck had died, sending the puppy on a blood fueled revenge rampage. It's good fun and definitely worth checking out.

Lionsgate's Blu-ray of John Wick: Chapter 2 is a decent enough film, but this disc is definitely worth a buy if you're on the fence about the film. It'll make you a believer.


Peter Martin contributed to this story.