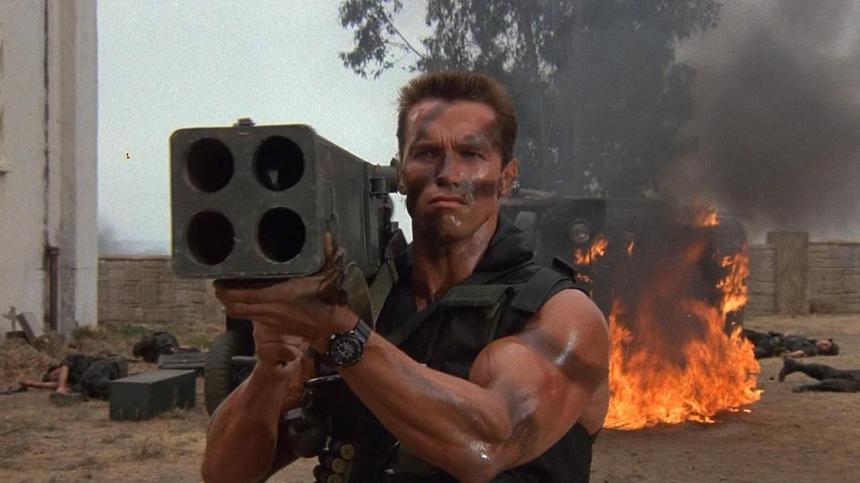 Now this is a movie I’ve been dying to review for quite some time.

I’m a big Arnold Schwarzenegger fan (yes, I can spell his last same without looking it up on Google), and I especially love his 80s output: films like Conan the Barbarian, Predator, and course, Commando, are absolute classics, and for many different reasons. The first is an epic, grandiosely-directed, gory action film; the second is one of the most suspenseful, sci-fi-action pictures ever made (both Arnie and the creature are immensely memorable).

The third is a cheesier, more absurd kind of product, but it somehow works. The plot is simple, a flimsy excuse to watch Arnold singlehandedly kill a small country’s entire army. When his daughter (a very young Alyssa Milano) gets kidnapped by a group of South American criminals led by a Freddy Mercury clone named Bennett (Vernon Wells), ex-Black Ops Commando John Matrix (Arnie) launches a one-man war against them. And believe me when I tell you that absolutely nothing will stand in his way.

Commando is the perfect embodiment of 80’s Schwarzenegger: over-the-top action and gore, an almost admirable defiance of the laws of physics, and Arnie’s patented cheesy one-liners. Commando has it all. The plot is almost meaningless, rendering the script to nothing more than a vague structure for Arnie and his director, Mark L. Lester (Truck Stop Women, Class of 1984), to follow. What’s important here is the violence, the light tone, and the way Matrix —awesome name, by the way— seems capable of killing any disposable henchman without breaking a sweat. The movie is almost abstract in places, forgetting that it’s supposed to follow some kind of narrative structure; but hey, who cares about things like that when you have Schwarzenegger uttering brilliantly stupid lines of dialogue before disposing of his enemies?

Everyone knows Arnie is a force of nature, but never has it been more evident than here. Consider the way he tears a phone booth from the floor, with an admittedly small David Patrick Kelly (The Warriors) inside. Or his fight against 80s star Bill Duke (“I can’t believe this macho bullshit!”) Or even the fact that he seems able to jump from a plane in mid-air, to the middle of a swamp, without breaking his legs. John Matrix is an invincible superhero, and although this renders most of the action sequences absolutely tensionless, they’re so exaggerated and absurd, that one can’t help being entertained.

It also helps that both Lester and Arnie clearly know what kind of movie they’re making. They’re not out to develop a particularly complex story, or believable scenes of violence. They keep the tone light despite all the blood and the deaths of countless South American soldiers —yes, Matrix practically kills a whole island by himself, and it is glorious—, with Matrix making quips as often as possible, mocking his enemies, obviously aware that they’re no match for him.

“Leave anything for us?”, ask a Colonel to Matrix in the last scene of the movie.

“Only bodies”, answers Arnie, as serious as ever, with his daughter smiling by his side, despite all the carnage she’s just witnessed.

One could argue that the film trivializes violence, making its audience laugh at the slaughter of hundreds of “red-shirts”, and even celebrate the demise of some of Matrix’s more significant foes. But Commando, despite its cartoonish nature, is an R-rated affair through and through, and thus should not be consumed by children. (OK, I admit I saw it for the first time when I was fifteen or sixteen years old, but here I am, a non-threatening, non-killing movie lover). And anyway, this isn’t the bloodiest or goriest film one could ever see, even in the action genre; yes, it’s got a couple of nasty moments (Exhibit A: The tool shed scene), but even the grenade killings are pretty sanitized; it’s funny to see the stunt doubles jumping and flying around every time there’s an explosion, though.

Arnie is at his absolute best in the movie. Yes, he's still a little stiff, but he's a master at uttering one-liners, and Commando has some of the most memorable of his career. (“Let off some steam, Bennett!”) Vernon Wells is intriguing as Bennett; he’s supposed to be an ex partner of Matrix, presumably his equal in a one-on-one fight, but he looks like a Village People reject, complete with Freddy Mercury moustache, and the attitude of a Saturday morning cartoon villain. He’s as intimidating as Alyssa Milano’s grade-school character, but tons of fun.

Legendary character actor and poster boy for 80s smarmy weasels David Patrick Kelly is excellent at playing slimeball Sully (he’s a funny guy); Rae Dawn Chong is the perfect counterpart for Matrix, serving as the audience’s surrogate, pointing out all the ridiculousness that’s going on around her, and Bill Duke tries to act badass, only to be taken out by Arnie in all of five minutes. He has a more significant part in the equally memorable —but more carefully crafted— Predator. (“Mac, MAC!”)

Oh, and one can’t write about Commando without mentioning James Horner’s outrageous score. Most action movie music consists of intense orchestrations, full of percussion and brass, which contribute to the excitement of the proceedings. But not Horner’s work for Commando. The film’s soundtrack, much like the movie as a whole, couldn’t be more 80s: tropical-sounding rhythms (because the bad guys are Latinos, you see), and an awesome main theme with the best use of the xylophone this side of a Hawaii-set romantic comedy. It definitely doesn’t help the viewer take the film seriously, but I really don’t think that was Lester’s intention.

Commando is one of my favorite Schwarzenegger movies, although not for the same reasons I like pictures like Terminator 2 or Predator. We know the ex-body builder with the distinctive accent was capable of developing characters we actually cared about —most people cry during the ending of T2—, but that was not his job in Commando. This is an over-the-top, cartoonish and brilliantly dumb action picture, the sort of production one has to enjoy because of its many obvious flaws, not despite them. In short, if you like 80s Arnie, 80s music and hair, and 80s cheese, you’ll definitely love Commando.

This movie is infinitely re-watchable for me. A cheesy classic here at House Manatee.

I also like it for the endless amount of continuity errors such as them driving away in a brand new yellow Porsche that was totally trashed and flipped over, to spinning knee pads on the ground after a stunt to the horribly fake soldiers standing in front of exploding buildings.

Haha, yeah, it all adds to the fun! I believe they actually used mannikins for those shots with the exploding buildings, as well as a terribly fake-looking model.

Best trailer of all time!