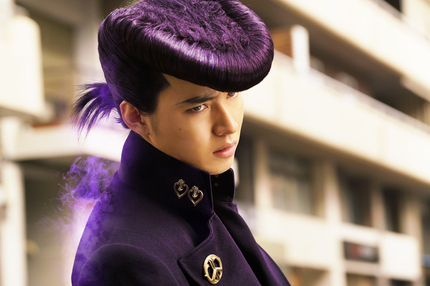 The headline says it all, really: Japanese cult auteur Miike Takashi's live action adaptation of hugely popular manga and anime series JoJo's Bizarre Adventure will have it's world premiere at the Neuchatel International Fantastic Film Festival. Which means The Boy will now commence nagging me for a trip to Switzerland this summer. And, yes, Miike himself will also attend.

The Neuchâtel International Fantastic Film Festival is honoured to welcome a leading figure of filmmaking in the person of Miike Takashi for its 17th edition. The legendary Japanese director, known for an experimental and prolific career, will present the world premiere of JoJo's Bizarre Adventure: Diamond Is Unbreakable on Sunday, July 2nd, 2017 in Neuchâtel. This adaptation of Araki Hirohiko’s eponymous cult manga (more than 100 million printed copies) will be screened as part of the International Competition. The film’s crew, including main actor Yamazaki Kento (who portrays Higashikata Josuke, aka Jojo), will also attend the event.

JoJo's Bizarre Adventure: Diamond Is Unbreakable
This highly anticipated adaptation focuses on the fourth part of the JoJo's Bizarre Adventure manga series created by Araki Hirohiko, published between 1992 and 1995, and now considered a customary part of Japanese culture. Highlighting suspense and mystery, Miike Takashi’s energetic and visual effects heavy direction is perfectly suited to follow the strange daily lives of his characters, who will have to deal with unusual and bizarre encounters. JoJo's Bizarre Adventure: Diamond Is Unbreakable is an event — an extraordinary cinematic experience through the greatest adventure in the history of manga.