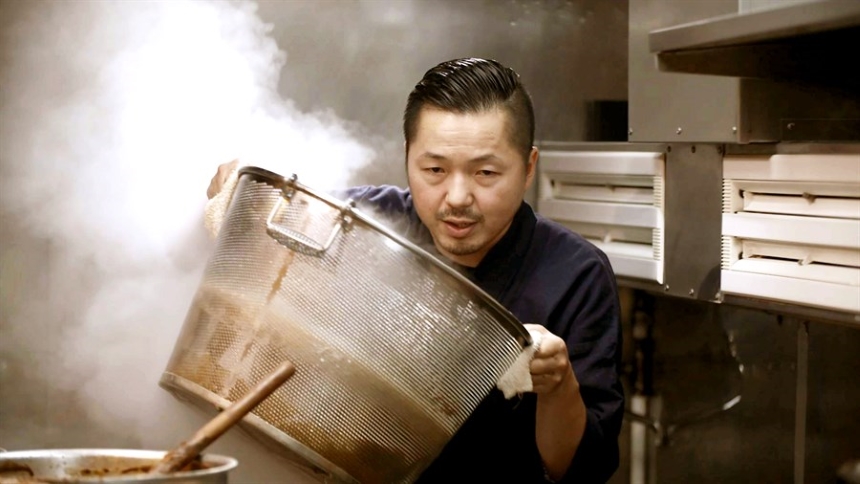 What is it about ramen, Japan's robust working man's (be it salaryman, artist or labourer) meal of broth, noodles and pork, that makes its practitioners and enthusiasts become philosophers and seriocomic poets? Cinema has only encouraged this, as Itami Jûzô's gonzo, fussy, and hilarious Tampopo is unassailable as one of the greatest movies about food ever made.

Ramen is cheap and immediately satisfying, best slurped and inhaled, not precious and restrained in its consumption like sushi. And yet, behind the construction and execution of the dish, is a fanatic's obsession, one that sidles up beside both ritual and rock 'n' roll adulation.

Shigeno Koki's documentary might be inflected with a bit of solemn hagiography, but I believe that is part of the self-aware joviality that seems to accompany discussions of ramen in general. And his principal subject, Japan's current "King of Ramen," Tomita Osamu has won the prestigious title from one of the country's leading ramen guidebooks for the third year in a row, giving him a kind of deific aura in certain circles. Consider the fact that there are several magazines and guidebooks devoted to the dish; it is the most documented food item in the country.

The documentary spans about a year, specifically Chef Tomita's 10th anniversary of his tiny shop. His restaurant is well off the beaten path, far outside of Tokyo, in the unassuming northern town of Matsudo in Chiba prefecture. Things culminate with a 'super team' of ramen top chefs collaborating to invent a new kind of broth as a collaboration-cum-celebration. The narration of this event borders on a parody of old school nature documentaries. Ramen chefs in their natural habitats.

Tomita is unabashedly a 'ramen head' himself, on his rare days off, and his tiny shop doesn't serve customers if he is not on the premises; he visits other ramen shops. Sometimes he goes solo, sometime he brings his wife and young children along. His wife is also blessed with self-awareness when it comes to what obsessions mean in both career and food. He is charming, learned, confident and modest. The camera loves him almost as much as it does loving close-ups on the food itself or the intense manner his patrons slurp up the dish.

Unlike its 100 years of evolution of ramen (the dish originated from China but has evolved to suit the Japanese palette and sensibility), where the various styles of broth, the thickness and consistency of noodles and preparation of pork, often saw chefs keeping trade secrets -- even from their own apprentices -- Tomita is so confident in the discipline and meticulous approach his ingredients are selected and prepared, he is happy to drop his recipes right in the text of the film.

Someone at the Q&A of the screening amusingly compared his 'open source' ramen approach to Elon Musk making Tesla's patents public. Chef Tomita's response was, of course, that he would love to taste ramen that is improved or evolved from his own innovations -- thick broth and intense umami, and the slipperiest noodles. The implication was clear: always be improving, always be present. The documentary might add, always be well attired, although Tomita's tastes in fashion border on the idiosyncratic and flamboyant side when not in his chef's uniform.

His own apprentices gripe about Tomita's all-seeing eye, his all-hearing ear, and down-to-the second approach to noodlery and customer engagement. They scrub the micro-kitchen in the shop with military precision, and repeat the mantra that good food cannot come from a dirty kitchen. Tomita's tiny restaurant (all the best shops have few seats in ramen subculture, see again, Tampopo) has a mere ten seats, and by necessity of the intense demand, has implemented a kind of Disney-FastPass system to not have the legions of regulars, or ramen pilgrims from Tokyo and abroad, wait all day in line. Hilariously, this does not stop some customers from queuing up at 6am to secure a reservation ticket.

A history lesson, a state of the nation, and many steamy close-ups of the various bowls top ramen chefs (curiously, all male save one) make Ramen Heads a mindfully aware ode to the complexity of everyday things. With a bit of hush in its breath, it looks for the wisdom to distinguish when to be fastidious and when to be minimal.

When bowls are served, however, it is a rapid, noisy affair of beatitude. Whatever alchemy goes into its construction, It remains something to be scarfed down as you rush to work. The film carries this ethos, aware of an ongoing national (and international) preoccupation. Ramen is life. Long live ramen.