Shinydisc Corner: 4K UHD Release of FANTASTIC BEASTS AND WHERE TO FIND THEM

The UHD disc looks about as great at home as you’d expect. Now, about the film ...

For fans of the Harry Potter franchise, there seemed to be a near endless well of backstories from the wizarding world worth exploring. Fantastic Beasts and Where To Find Them forms a prequel of sorts.

Set during Jazz Age New York, we meet the quirky and awkward Newt Scamander (Eddie Redmayne),who’s a zookeeper of a very different kind, traipsing with his valise that contains within it a menagerie of mystical monsters. Narratively there’s lots of card shuffling taking place, setting things up in with teases of characters tangential to the history that Harry learned during his time at Hogwarts. With glimpses of the American side of wizarding, complete with puritanical zealots and hapless politicians, it’s a starker, more adult take on the greater narrative.

Unfortunately, while the coming-of-age tale of the main arc had its charms even for those who never picked up a volume, Fantastic feels a ride of a different caliber, fighting too hard to be fanciful and sprightly while still laying out a complex structure to build upon. The beasts themselves are a slew of CGI nonsense, designs that feel more slapdash than anything else.

It’s a poor attempt at resurrecting the likes of Jumanji within a context where wands matter, all the while wondering why people who can apparate at will need to take a steamship across the ocean (likely, of course, for the same reason they need to schlepp by train or flying car). We’re getting answers here but not expected to ask too many questions, making for a film that somehow feels even more infantile than the ones about children. 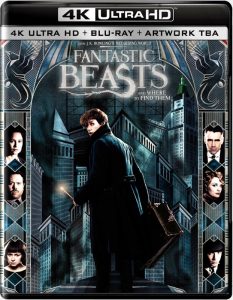 Video: Derived from an original 4K digital master, the UHD disc looks about as great at home as you’d expect.

Fans of the format will know that UHD doesn’t allow for 3D presentation, and based on how David Yates and his cinematographer Philippe Rousselot have framed the film, that’s a shame.

There’s loads of times where it’s clear they’re milking stereography, and its moments that this that seem even more gratuitous somehow in 2D. Still, the muted colours are presented admirably with the HDR presentation (a jump up from the 1080p version), and the human characters look appropriately cinematic.

However, in a film where these characters are constantly interacting with creatures applied in post-production, the contrast is even more noticeable. In 1080p things are softer yet the integration seems less overt somehow, as if the greater resolution shows the limitations of the animation style.

This hasn’t been quite as bad on other UHD titles, so I’m expecting it’s merely a case that the animation characteristics and compositing are simply poorly done compared to other titles.

Audio: It’s somewhat strange, but the default audio selection on the disc is DTS-HD Master audio, hardly a slouch for a soundtrack. Still, when we’re used to the “best” soundtrack being the default, you have to manually select Dolby Atmos to get the film’s dynamic, 12 channel soundtrack employed.

Audio-wise, there are no complaints. Dialogue is clear, and the height-channels are suitably active during the many swirling scenes. It may be a factor of a series that promoted Quidditch, but there were at least a dozen scenes with mad swoops of a character, a large bird or some other creature that was emphasised well by the 7.1.4 mix.

Conclusion: For fans of the Potter franchise there’s lots of tidbits to admire about the film. For neophytes you may get lost in the esoterica of it all, despite the obvious attempts to make it accessible.

What started as a children’s tale eventually became quite a bit more adolescent, and this keeps with the tone of the later books while still stumbling along. As an addendum to Potter’s story its good enough, it seems, but hardly a revelatory addition to what’s come before.

As it sets the stage for bigger battles -- shall we see the Great Depression through the eyes of the Ministry of Magic? Plus, there’s that battle between Dumbledore and Grindlewald to come in ‘45 --  we might get more of this timeline. For now, it’s just a piece of a bigger puzzle, and not a particularly interestingly shaped one at that.

Do you feel this content is inappropriate or infringes upon your rights? Click here to report it, or see our DMCA policy.
4K UHDFantastic BeastsHarry PotterShinydisc Corner

More about Fantastic Beasts and Where to Find Them