Review: FANTASTIC BEASTS AND WHERE TO FIND THEM Slowly Lurks

JK Rowling's Harry Potter spin-off Fantastic Beasts and Where to Find Them is an uninteresting first chapter in a threatened saga. 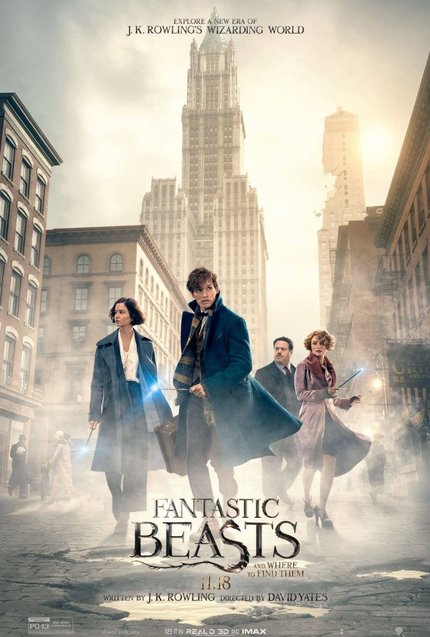 Don't get me wrong, I enjoy a good Harry Potter tale as much as the next guy… Actually, I truthfully don’t. Having never read the books, and having only seen most of the films once, I easily qualify as the least Potter-tuned member of my own large family. (And that’s including the 2-year-old.) Although it’s true that the movies are full of soaring highs as well as regrettable lows - sometimes within a single film - many don’t hold up to repeat viewing, and play like the trimmed-down strict adaptations that they are.

Fantastic Beasts and Where to Find Them, an enormous film which Potter author JK Rowling (the sole writer and producer of this movie) has already publicized is the first of five, count ‘em, five of these, is, this time, mercifully unburdened with any specific literary source to “get right.” It simply must play by the well-established wizarding rules of the Potter books/films, positively evoking them all the while. That, and be a good movie.

Over the course of seven now-classic stories, Rowling detailed the coming of age of an unlikely chosen one. As the characters aged, one year per tale, the tone and stakes of the world darkened and deepened. In making the resulting eight film adaptations, the kid actors whom the franchise was built around (Daniel Radcliffe, Emma Watson, et al) aged into respectable and viable actors in their own rights. In this, the studio got very lucky. For evidence, look no further than the Narnia film series, which has struggled in this area. With Fantastic Beasts, there's no attempt to recapture that lightning in a bottle. This film details the magical adventures of wand-wielding grownups.

The vision of this new endeavor is both creatively admirable and economic: set an entirely new saga, with entirely new characters, in the already established magical world of Potter and company. The possibility of Beasts unfolding into something special all its own is clearly the intent. I have to admit, I had hope that it would put me under its spell. It simply did not.

Eddie Redmayne is Newt Scamander, a British creature-catcher on a mission in jazz-age America. Scamander, Potter fans know, is the author of an eventual book, referenced in those stories. This movie, and its presumed sequels, will track his journey to the dusty plains of Arizona, where he can release the many magical creatures currently stored in his battered leather mystical suitcase.

Caring about this wide-eyed animal wrangler is particularly difficult due to Redmayne’s terribly distracting performance. I’m not usually one to go after actors, much less an Oscar winner, but in a film full of perfectly decent performances by all the other actors - including an intrepid Katherine Waterston, an adorable Alison Sudol, an affable Dan Fogler, and a creepy Ezra Miller - it’s terrible that you can actually see the acting Redmayne is doing. Yes, this is essentially a children’s movie. But no need to over-pronounce everything, sir.

One thing the Potter series really has going for it is its commitment to what happened when. There's no "moving timeline" (a la Marvel or James Bond) to accommodate the perceived creative need to always be "in the moment." Harry Potter has always been a 1980 baby; no need for floral arrangements to conveniently obstruct dates on any gravestones in this world.

All of which allows for Fantastic Beasts to comfortably and unapologetically function as a fully in-world prequel - even if JK Rowling doesn't seem to care for that label. Fitting then, that the many digitally-rendered creatures read no more realistically than the similar fantastic beasts of the original series - an aspect which hasn’t aged well. At all. Disney’s recent The Jungle Book, with its eye-popping, wondrous visual effects, completely puts this film's efforts to shame.

Furthermore, as seen in 2D, Fantastic Beasts has that artificial distracting quality of a 3D film smashed flat. It’s hard to know if this is what director David Yates was really going for, or if they simply ran out of time. In any case, Yates - who confounded audiences by materializing out of nowhere and then being handed the keys to all of the Potter film series’ later entries - proves that he’s a director who’s perhaps only as good as his screenplay, and perhaps most comfortable stepping into steering established characters to their finished lines. Helming Chapter One of something definitely doesn’t seem to suit him. This film has its moments here and there, but they're scattered and far too infrequent. World building can be boring when it's done at the expense of the characters, especially when the world's already been built.

Although Fantastic Beasts is amazingly well dressed, both in terms of wardrobe and visual setting (1930s New York City looks absolutely swinging!), the first half is so slow that I checked out of following it by the second half. And, I really didn’t care. Grown actors dressed as the 1930s chasing around digital creatures that keep accidentally getting free does get old, no matter how magically cockamamie the process of recapturing them is. One big set piece has our heroes desperately trying to lure an escaped dragon back to the briefcase by having to catch a live cockroach, and toss it across the room into a teapot. I don’t know.

One thing I do know, though - if this series is really going to span into a pentalogy, Rowling and company have a lot of work to do. At the moment I can’t say I’m looking forward to it, but here’s hoping part two is less of a beast, and a lot more fantastic.

Do you feel this content is inappropriate or infringes upon your rights? Click here to report it, or see our DMCA policy.
Colin FarrellDavid YatesEddie RedmayneFantastic Beasts and Where To Find ThemHarry PotterJK RowlingKatherine Winstone

More about Fantastic Beasts and Where to Find Them