Noomi Rapace teams with director Steven Shaiberg to probe the extremes of the human condition. 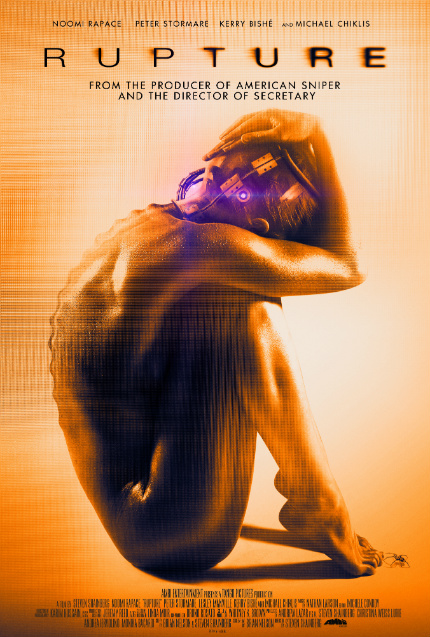 "Don't fight it. Let it happen. This confusion is all part of the process."

This advice is repeated, often in a beatific manner, by the mysterious group of captors who are intent on, among other things, helping the audience navigate the actual film. It has been a decade since Seven Shainberg's previous film, Fur: An Imaginary Portrait of Diane Arbus. He returns once again to defy expectations with Rupture, a tight indie horror picture that poses big questions in a claustrophobic package.

Beleaguered single mom Renee is on the cusp of a get away from it all weekend, a skydiving trip with her girlfriend. After struggling with her son to get his homework done and drop him off at his father's house, on the cusp of her weekend of freedom, her car is run off the road and she ends up strapped to a medical gurney in a laboratory compound in the middle of nowhere.

In an alternating series of uncomfortable mind games by the mysterious cult of captors, and various escape attempts by Renee - who shows signs of impressive resiliance under pressure - the film finds its rhythm in the three loud clacks of the heavy-door lock mechanism opening and closing between visits.

Noomi Rapace, an unconventional leading lady who often serves a spry chameleon on camera is no stranger to body horror. She endured one of the most wince-inducing sequences in recent mainstream cinema, namely the xenomorph hysterectomy in Ridley Scott's Prometheus.

This might have been a key reason for her casting as the resourceful Renee, who blossoms, in her way, as she is seriously fucked with, both mentally and physically, by her captors. She is restrained, caressed, cajoled, subjected mercilessly to her worst fear (arachnophobes beware, Rupture would make a skin-crawly double bill with Denis Villeneuve's Enemy) and bears witness to scenes that would not be out of place in a Saw sequel.

Shainberg's approach is to keep the body horror in kind of a mellow holding pattern (shades of his S&M approach in 2002's Secretary). He wants us to wallow in Renee's predicament without the kind of transparent gamesmanship typically involved in these sorts of genre pictures. We are allowed time to consider some of the questions the film asks, while the 'nuclear-candy' color palette keeps our baser visual senses simulated.

Cinematographer Karim Hussain pushes the envelope of his neon-carnival-nightmare work on Hobo With A Shotgun, by wedding it to the more subtle frame composition of something like 12 Angry Men. As Renee's world is forced into ever smaller spaces, so too does the camera, which becomes lubricated with sweat and blood to allow for the squeeze.  Some of this careful work is undermined by a few moments of picture-breaking CGI, which took me out of the movie hard enough to think about the wrong question, "was there a simpler, better way to show a certain key image?"

Nevertheless, Shainberg and his co-writer, Brian Nelson use the frame-work of an 'escape-room' narrative to probe the extremes of the human condition. How fear and trauma can destroy, but under particularly delicate circumstances, it can also temper towards greatness.

Rapace is game with what the filmmakers are aiming to put her through, and she is ably supported (or rather manipulated) by a rogues gallery of top performers, including Peter Stormare, Lesley Manville and Michael Chiklis, all of whom chew the scenery on Qualuudes.

Are they aliens, religious nuts, government think-tank operatives, or highly resourced self-help enthusiasts? In the end the reasons matter less than one might think. In this kind of filmmaking, it is all the same process, only Shainberg bends things towards his own idiosyncratic ends.

Review originally published during Fantasia in July 2016. The film opens in select U.S. theaters on Friday, April 28 and will also be available to watch via various Video On Demand platforms.

Do you feel this content is inappropriate or infringes upon your rights? Click here to report it, or see our DMCA policy.
Kerry BisheMichael ChiklisNoomi RapaceSteven Shainberg