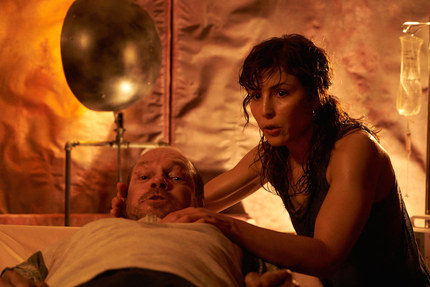 Rupture is the latest film from writer-director Steven Shainberg (Secretary) and it had its world premiere at Fantasia. Shainberg often works with complex female characters and stories, and Rupture is no different. In the film, Noomi Rapace (The Girl with the Dragon Tattoo trilogy, Prometheus) plays a mother who's abrubtly abducted one day after dropping her son off at the ex's house for the weekend. She's drugged and wakes up in the back of a truck en route to a facility where she's kept imprisioned for experiements in fear. She discovers that she's not alone as she tries to escape her captors, who inject icky drugs into her and speak with hardly any emotion in frightening tale reminescent of Invasion of the Body Snatchers.

I sat down with Shainberg for a virtual film school lesson on his latest production. Check out a clip from Rupture below the interview.

Where did the idea for Rupture come from?

Steven Shainberg: Originally it came from the idea to make a found footage movie about a person who’s abducted by aliens and someone has a camera and that footage makes it into a movie. It takes place on the spaceship where they were abducted to; I was inspired by some extent by Paranormal Activity. What I found most inspiring about that film is when they put the camera down on the bureau and just let it sit there.

As the idea evolved, it became more interested that the way I want a film to look is not a good fit for a found footage movie. I want production design and to move the camera.

I want it to BE a movie!

I was at your world premiere here at Fantasia, and you mentioned in the Q&A that a few things have changed since a screening in Berlin. What changed in particular?

We re-did the ending and did a quite a bit of looping on the ending. It used to be two or three minutes longer and was a bit slower. What gets said was rewritten in the spots where it could be rewritten. I wanted to focus more on motherhood. One of the things the film is about is the difficulty of motherhood. I like that fact that her (Rapace’s character Renee) transformation isn’t complete at the end of the film, and that her motherly instinct kicks in.

I like that the ending wasn’t cut and dried.

Exactly. The cut-and-dried version is too easy, and I don’t think it’s truthful — especially about transformation. I think there are residual parts of us that hang on. I think to do that with an actor like Noomi Rapace feels so electric, concrete, and real.

When in editing, do you go through a number of cuts until you’re happy? The process is different for everyone; how does it work for you?

(Laughs.) Oh yeah! It’s horrible! Here’s the experience, and I think that any director will tell you this: in the beginning, you think it’s a disaster. Then you think,“oh, this is starting to be something.” Then you think you’ll never be able to fix the problems. Then you think, “this is gonna be great!” You’ve solved everything. And then people come in and watch it in a screening, and then you think, “I need to re-shoot a lot of this.” You go through a spectrum of emotions from despair to euphoria.

In terms of casting, well done! Did you have to search for a long time to find your cast?

No. The advantage of low-budget filmmaking is that you can’t afford to search long, but there’s another advantage. If I made the movie with another million and all that money went to actors, Noomi’s character would be kidnapped and taken to a place with a bunch of recognizable people, and you’d feel much more comfortable. So would Noomi, in a sense, if she’d been in a room with a bunch of actors she’d been around. But it’s not that Michael Chiklis isn’t a name, and Leslie Manville is a major star as far as I’m concerned.

But the audience here — and in most places — wouldn’t say, “oh, it’s that person!” That freed me to find an eclectic group that’s from all over the globe. Another thing is, “did you feel their personal Rupture?” That doesn’t mean that they’re a better actor than someone else, but means that you’d feel something from them that’s appropriate to this movie. That’s a very strange criteria that took awhile for me to communicate to my Toronto- and New York-based casting directors.

They started bringing in people, and I’d have to say, “no, that’s not right,” and gear them towards character actors instead of very attractive people. It was a process of making a collage. The way that things were written in the script weren’t necessarily what I wanted, but I wanted the best people I could find. A 35-year-old African American male could turn into a 60-year-old Asian woman. What I wanted them to focus on wear finding the most interesting people possible.

That’s what’s compelling. I care that my group of people work together in ways that are interesting and surprising.

Did this all take a very long time?

No, this movie got made fast. My collaborator Brian Nelson and I wrote the script and re-wrote it quickly, and we got Noomi fast because I was working to get her into another film I was trying to get made. She wanted to do it, and we were getting the money at the same time, and it fell into place relatively quickly.

Your sound design and score are wonderful, and really riveting in places. Have you developed a short hand when working with these crewmembers?

I have a sound designer named Eugene Gearty who’s worked with Ang Lee and Scorcese; he’s THE reigning genius of the world. He’s also a great friend and he knows what I like. That said, there’s a lot of trial and error and we worked for a long time to get sounds right. We had a big group on people in Toronto working on it, but all of it has to flow through one person.

Nathan Larson, my composer, is one of the greats. He really understood the movie. It took a lot of work. We talk about: “what’s the feeling here? What do we need to see and feel?” Noomi is going through an intense, almost religious experience. These sorts of ideas are the starting point for music and sound design.

There’s a certain transformation for some characters in the film. What was the decision behind the CGI versus practical effects?

The decision I’d have to have had was more practical effects, but we couldn’t afford the time. To some extent, we had to rely on saving time in preproduction. I think the last pass I got from the VFX people was number 47.  It took a very long time to get through the technical aspects of working through those things.

There’s always a fine line between how much time versus money you can afford.

That’s right. The more you can get done practically, the better off you’ll be, but that really requires time, the actor, and the capacity to see what’s working and what’s not — and you’re going to have problems.

Karim Hussain’s photography is absolutely gorgeous in Rupture. How did you meet and collaborate together?

We were in Toronto and wanted to hire a Canadian DP. He was clearly the right guy — open to experimenting — and his stuff is phenomenal. His references, particularly with baroque Italian horror movies, was very helpful. He introduced me to a lot of old films that were enormously helpful.

Yes, exactly! They were fascinating and beautiful films. In terms of lighting, that stuff we collaborated on together as the film evolved. Essentially, this idea came from the fact that the aliens’ eyes are very sensitive to light. So what does that mean in this place that they’ve made for themselves? That was the freeing element we had to play with.

Was the building where most of the film takes place a completely built by your team?

Yes. Everything you see in interiors is a set. There’s a scene where Noomi is trying to escape and there’s one little cylinder on the exterior of that building where she is — everything else is completely digital. The bricks, the parking lot, the sky, the car… It took a lot of work to get there.

What was the biggest challenge of this production?

Putting Noomi through what you see onscreen. It was hard to rely on myself to put Noomi through that and not back off, ease up, or say, “yeah, that’s okay.” That’s tough when you adore someone, as I do Noomi. I’m not inclined to be so rough, it’s not who I am. There are plenty of directors who get off on that, I think, but I don’t.

As we got closer to shooting that particular scene, I realized that this was going to be the hardest thing to do for me. You gotta be willing to do it; if you don’t, the work suffers. Frankly, when I see the movie, I still think it’s not enough. I know that it’s enough, but I still could’ve done more.

Where are you screening next?

FrightFest and Sitges, where we’re very excited to play. That’s where this movie belongs.

Do you feel this content is inappropriate or infringes upon your rights? Click here to report it, or see our DMCA policy.
Michael ChiklisNoomi RapacePeter StormareRuptureSteven Shainberg